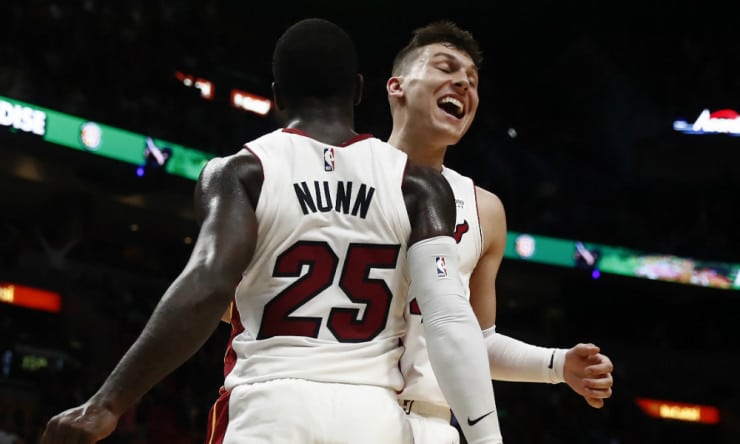 With every new NBA season, we tend to forget a few things here and there; players or teams that go through a down year are often, warranted or not, cast aside for the next best thing, only to resurface in the NBA’s collective conscience later on.

Like last season, for example, Dwight Howard was regarded as a nothing-addition for the Los Angeles Lakers, a gamble that they may have been better off not taking. However, Howard played an integral role in the Lakers’ run to the NBA title and reminded everyone that, when he plays without distractions, he’s one of the league’s fiercest around the basket.

But that’s just one example. So, who or what has been re-discovered this season? Let’s take a look.

Nobody’s forgotten that entirely. It’s just been a while since people have seen Curry at the peak of his powers.

Sure, it was easy to be skeptical of what he was capable of coming into this season. But, with Kevin Durant gone, Curry had free reign to score and shoot as much as he desired. And, with that freedom, Curry’s put up his best numbers since 2016, his second MVP season. In 15 games, Curry’s averaged 28.2 points 5.5 rebounds and 6.1 assists and shot 45 percent from the field, 37 percent from three and 93 percent from the line. He’s reminded everyone why he’s one of the games best and that he can accomplish anything or score on anyone on any given night.

Of course, the absence of Durant, as well as the loss of Klay Thompson and others, has led to another atypical season for the Warriors. Their 8-7 has them tied for seventh in the Western Conference and, while they have certainly improved on how they looked to start the season, they have a long way to go before they’re back in title contention.

The Warriors may never again reach the heights they once knew, either before or with Durant. But, until Father Time dictates otherwise, Curry should long remain a nightmare for the opposition.

Tom Thibodeau Can Get It Done

What can you say about the New York Knicks? Unironically, a lot.

Not only have they shown themselves to no longer be the butt of the NBA’s jokes, but, compared to the last decade-plus of Knicks’ basketball, the 2020-21 season might be their brightest yet.

Julius Randle’s transition into more of a point forward-type has generated a career-year and All-Star buzz. RJ Barrett has continued to improve rapidly, while rookie Immanuel Quickley has “quickley” become a fan favorite. Most impressive of all, however, is that New York has allowed the fewest points per game (102.7) and the fourth-fewest points per 100 possessions (106.8) in the NBA.

In other words, they finally look like a competent basketball team. But what’s changed? Two words: Tom Thibodeau.

The players have bought in to Thibodeau’s scheme and, clearly, it’s had a positive effect. Of course, the disaster that was his Minnesota Timberwolves tenure made us forget just what a proven head coach Thibodeau could be, but he’s put it all together in the past and, in New York, he would seem to be doing so once again.

Of course, there is plenty left to do. The Knicks’ spacing is a joke — and a bad one at that. In fact, their entire offense could stand to see some of that energy they bring on defense; the Knicks are dead last in the NBA at 101.3 points per game.

Still, at 8-8, New York is no longer a doormat and, given the last few seasons, that’s probably the best they could’ve hoped for. Rome wasn’t built in a day and the Knicks won’t be either, but the franchise looks like they may have finally turned a corner toward relevance.

Like the Knicks, the Cleveland Cavaliers have been another NBA-darling this season. And again, like New York, their players have bought in; head coach J.B. Bickerstaff has everyone playing with energy on defense and, while their offense hasn’t quite reached the same level, they’re competing to the best of their ability.

Of course, the progress of Kevin Porter Jr. could have been the cherry on top of it all. But that ship has sailed.

After an outburst directed toward general manager Koby Altman, Cleveland has since moved on from the young forward. Of course, the Cavaliers knew Porter came with baggage when they selected him with the last pick of the first round in the 2019 NBA Draft, but his potential was salivating and Cleveland had hoped they could help him grow — not only as an NBA player, but as a person. There have been success stories in the past, troubled players that have come in and shut out the noise and become both respectable characters and NBA players. DeAndre Jordan, a former lottery talent, dropped in his own draft due to similar concerns, but overcame those issues and has since gone on to play a long career.

Unfortunately, it just hadn’t gone that way with Porter and the Cavaliers, as the noise became too much to bear for a team with a long road back to relevancy. It’s reminded everyone just how hard it can be, both as a player and as their team, to deal with those issues and, regardless of the talent or potential, the headache sometimes just isn’t worth the risk.

Luckily for Porter, it’s not too late; a fresh start with the Houston Rockets should do him wonders. And, hopefully, the Rockets can help him overcome that baggage, his maturity issues and whatever else he may be dealing with.

But even if they don’t or can’t, Porter must wake up and seize his opportunity while he still can; if he sees another falling out in Houston, there’s no telling if he’ll ever get another chance elsewhere.