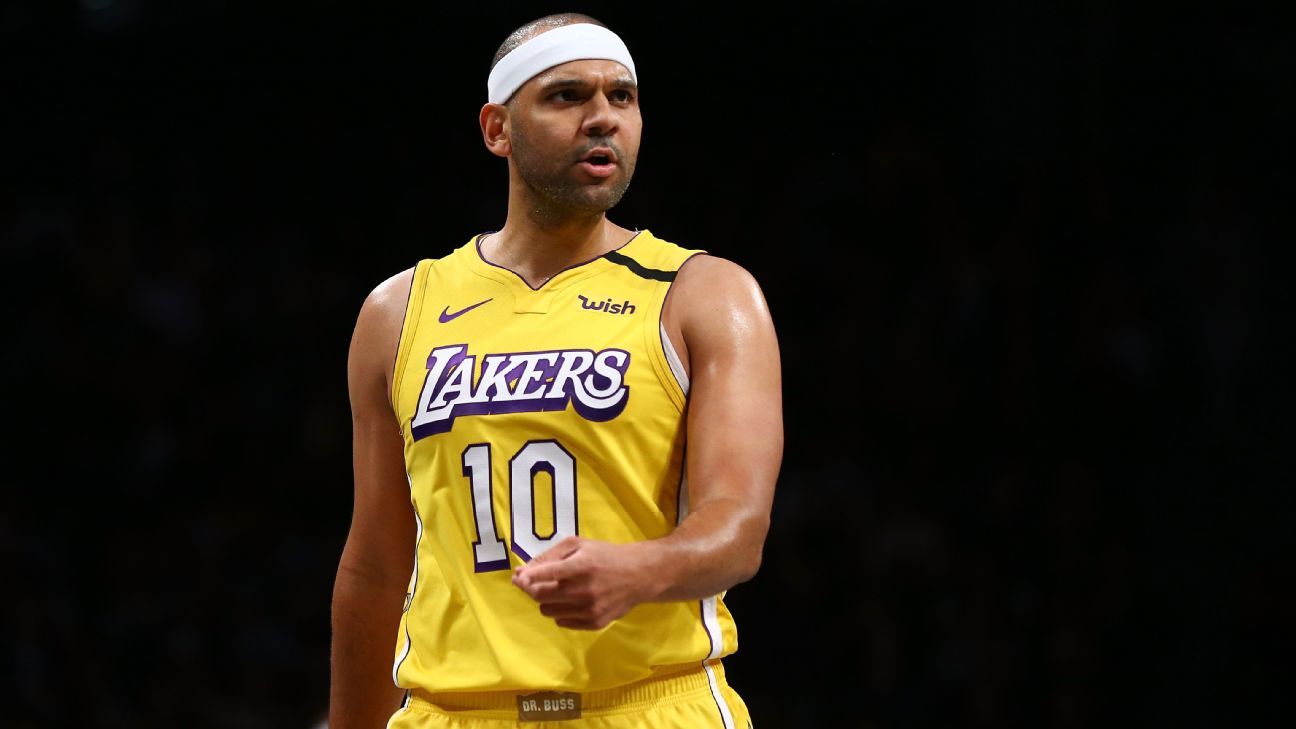 LOS ANGELES — The Los Angeles Lakers and LA Clippers might have missed each other in the playoffs last year, but Lakers reserve Jared Dudley, in a new book, revealed his team was primed for the “Battle for L.A.” because of Paul George.

“We hear some of those guys talking about how they’re the team to beat in L.A.” Dudley, along with co-author Carvell Wallace, wrote in their 42-page book, “Inside the NBA Bubble: A Championship Season under Quarantine,” released this week. “It’s fine if Kawhi [Leonard] says stuff like that. He’s defending a championship. We don’t trip if someone like Patrick Beverley is talking trash; that’s how he feeds his family. We get it. We respect the hustle.

“But we think it’s disrespectful for Paul George, who hasn’t won, to put himself on the level of [LeBron James] and [Anthony Davis]. This motivates us.”

The Denver Nuggets figured out a way to do it, coming back from a 3-1 deficit to bounce the Clippers from the Western Conference semifinals, thus thwarting a Lakers-Clippers showdown.

When asked about the passage in the book on Wednesday, Dudley explained that it was more about how the Lakers interpreted what George said than what the content of his message was, that got the Lakers riled up.

“Anyone can say anything,” Dudley told reporters on a video conference call after practice. “It’s what we use as motivation. And sometimes, if ever you remember Michael Jordan, all the certain stuff that he used as motivation for him. It wasn’t like they were wrong. It’s what I view.”

Dudley was asked if, as a veteran role player, he was being hypocritical in calling out an All-Star like George, in much the same fashion George was elevating himself into a conversation that included NBA champions when he’d never even played in the Finals.

“So, giving me the right [to talk trash back]? I don’t know. I don’t know what gives me the right. Fourteen years, 900 games, played with over 25 Hall of Famers. Future coach, future GM, I think I put a little bit of work in where I could talk about it,” Dudley said. “Doesn’t mean what I say is right.”

Clippers coach Tyronn Lue sounded like he would agree with the part about Dudley being wrong.

“A book? Jared Dudley?” Lue asked before the Clippers played the Cleveland Cavaliers on Wednesday. “I know I probably can’t cuss on here so I won’t cuss, but who cares? Just be who you are, play your game, who cares what people say, and what the outside people think. … As far as for me, I really don’t care what people say on the outside. And, you know, I hope PG doesn’t either.”

Dudley detailed in the book that it wasn’t just George’s comments that got under the Lakers’ skin — adding that a boastful Clippers billboard campaign plastered all over the city, including one strategically placed near the highway leading to the Lakers’ practice facility provided plenty of fuel, too. It was all too much talking for the Lakers’ taste.

“My comments were more about how we viewed the motivation,” Dudley explained Wednesday. “Paul George is a hell of a player, an MVP candidate. Doesn’t mean that what he said wasn’t wrong. But the difference is … how you see how someone like LeBron and AD, them not saying anything. Them saying, ‘You know what, we’ll find out who the king of L.A. is on the court’ last year.”

The Clippers beat the Lakers on opening night in December, 116-109, in what Dudley hopes to be a preview of a postseason meeting to come.

Just not too highly.

“We know Lakers will always be … The Lakers will be L.A.,” Dudley declared. “That’s what it is. It’ll always be our city. The Clippers could win 10 championships and it would still be (that way). It’s the history. It’s how it is.”

Lakers brass met with Russell Westbrook to discuss his future with the team
What if the Trail Blazers drafted Kevin Durant instead of Greg Oden?
Thunder rookies with same name recreate epic Spider Man pointing meme
Sources: Kyrie has wish list of teams if no deal
Irving says he’s returning to Nets next season