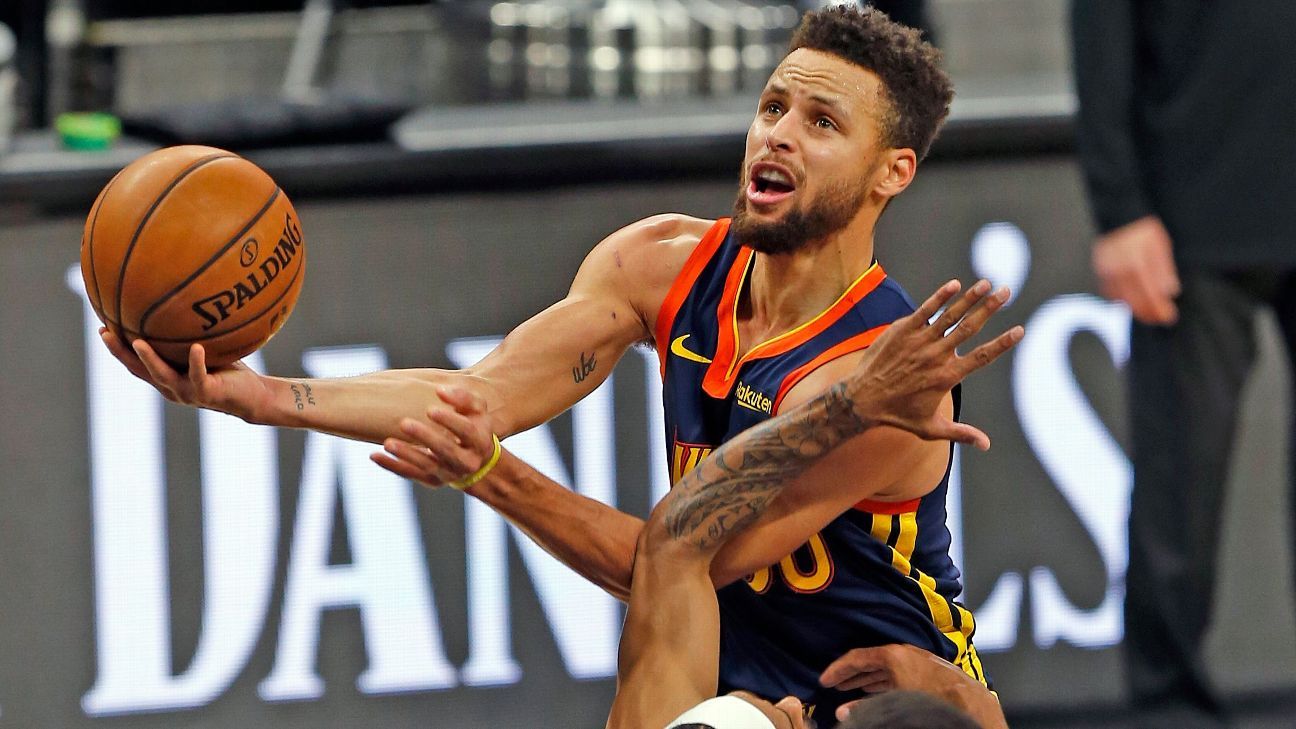 After a 105-100 loss to the San Antonio Spurs on Monday night that again saw Stephen Curry on the bench for half of the fourth quarter, Golden State Warriors coach Steve Kerr said he will not extend the star guard’s minutes to “chase wins” this season.

Kerr noted coming into the season that his target for Curry was around 34 minutes per game, as the former two-time MVP finds his rhythm again after playing just five games last season while recovering from a broken hand. The questions surrounding Curry’s minutes have resurfaced in recent weeks, given how dominant Curry has been offensively throughout the season. Curry, who finished with 32 points in 36 minutes Monday night, is averaging 29.4 points in 33.7 minutes.

“I’m into the long game,” Kerr said during a video conference with reporters following Monday’s loss. “We’re counting on having Steph here a long time, many years ahead. And I’m not interested in grinding through this season, which is already a difficult season given the COVID regulations, just the nature of the games themselves, these eerie, empty stadiums.

“For me, for our organization, we’re not throwing Steph out there for 40 minutes to chase wins. We got another game (Tuesday). We want Steph to be playing at a high level for many years, so we’re going to stay very disciplined and try to keep him at that 34-, 35-minute mark.”

Kerr has held to his usual substitution patterns with Curry throughout the season, letting the guard play all of the first and third quarters and bringing him back around the six-minute mark in the second and fourth quarters. Curry, who will be 33 in March, has said repeatedly throughout the season that he is always trying to push to play more minutes, but he understands Kerr’s reasoning and is on board with the plan the Warriors’ training staff has devised.

“It’s a topic that comes up a lot,” Curry said. “Of course I want to play as many minutes as possible. Of course I want to keep subtly letting them know how I feel based on a night-to-night basis. We got to be in a position where we do things throughout 48 minutes that that plan of attack works more nights than not.”

Curry tweaked his ankle in the first half, but it didn’t affect his game much as he still went 10-for-17 from the field, just two nights after scoring 57 points in a loss to the Dallas Mavericks on Saturday.

Kerr said he didn’t feel he needed to say anything about keeping Curry’s spirits up in the wake of several losses already this season in which Curry has played well but his teammates haven’t been able to help him close out a win.

“I don’t need to do anything,” Kerr said. “Steph’s a grown up. He’s an incredible teammate. He has full awareness of what we’re doing right now and what this season is about, bringing along young players and trying to be a playoff team and make a push, trying to do all that at once. Steph’s all-in and he never gets down, that’s part of his brilliance is just his overall attitude and approach and joy for the game. So Steph’s not frustrated. He doesn’t like to lose, he’s a big-time competitor, but he’ll hang in.”

Despite Kerr’s words, Curry acknowledged it has been a little frustrating not being able to help his team close games. With Monday’s loss, the Warriors are 12-12 on the year and currently sit in ninth place in the Western Conference.

“Losing sucks,” Curry said. “We all know that, no matter what the reason is … we don’t want to be in a situation where we get used to a losing feeling. That’s not who we are, that’s not what we’re about. We’re playing well enough, as of late, to be in most games, and down the stretch we just haven’t been able to get it done for a myriad of reasons, so it is frustrating. There’s obviously no secret about that. You don’t like walking off the court without a win.”

The Warriors had plenty of chances to win Monday’s game but turned the ball over 20 times and blew a 14-point first-half lead. Down 103-100 with 8.7 seconds left, Warriors forward Draymond Green took an out-of-bounds pass from Warriors guard Damion Lee and hurriedly fired up a long 3-pointer, thinking he would be fouled by Spurs guard Derrick White. But White never committed the foul and the shot never came close.

“Probably should have held onto it and just took the foul,” Green said. “It would have turned into a free throw game, but it is what it is … I felt like that was the smartest dumb play in history … A very smart play that ended up being dumb as hell.”

Kerr took blame as well, saying he should have reminded his team that Spurs coach Gregg Popovich doesn’t usually like to foul in situations where his team is up by three late in games. It was the latest in a long line of bad losses for the Warriors in San Antonio. The team is now 3-39 over its past 42 regular-season games on the road against the Spurs.

“Being that that’s probably the best organization over the course of the last 20 years as far as consistency — and being they play very well at home, and that is a group that no matter what, no matter who’s on the floor, that team is never going to beat themselves,” Green said. “That’s just kind of what you know any time you’re playing against a Pop-coached team. They’re not going to beat themselves. And when you’re at home and you’re not going to beat yourself, that kind of gives you an upper leg.”

Curry is optimistic the Warriors can get back on track on Tuesday in a rematch against the Spurs, but he kept brushing off the notion that he’ll have to play more minutes right now in order to make that happen.

“We shouldn’t have to play 40-plus minutes to win,” Curry said. “We got to do things in the momentum of the game to put ourselves in position … we have to make those adjustments as a group.”