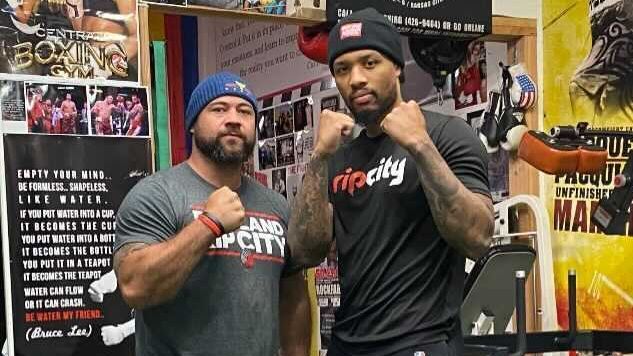 FOR DAMIAN LILLARD, the game wasn’t over.

Yes, the Portland Trail Blazers were trailing the Chicago Bulls by five points with 11.5 seconds left on Jan. 30, but he wasn’t about to give up. He made a 37-foot 3-pointer to cut the lead to two. After the ensuing inbounds pass, Blazers guard Gary Trent Jr. tied up Zach LaVine, forcing a jump ball with less than 10 seconds left.

Now it was Dame Time.

“Once he went to the jump circle, in my head I was like, ‘It’s about to happen,'” Lillard said afterward. “The ball is going to end up in my hands, I’m not gonna have much time, but like this is one of those ambitious moments that never happens. It never comes to life, but this time it did.”

Trent edged out LaVine, a two-time dunk contest champion with a 46-inch vertical leap, on the tip. The ball ended up in the hands of Robert Covington, who, after a brief scramble, shoveled it to Lillard.

With less than four seconds remaining, the opportunity Lillard had visualized was playing out. He took one dribble to the right, then rose and fired over the outstretched arms of 7-foot forward Lauri Markkanen.

Fighting is in Lillard’s nature. It was instilled in him as a child, when he would watch major boxing bouts with his entire family. That’s where his love for the sport — a sport he calls his favorite to watch — was seeded. He developed a passion for the fighting spirit in boxers, and eventually turned his passion into production, making boxing an integral part of the offseason workouts that have molded him into one of the most clutch players the NBA.

For Lillard, no challenge is too great. He always gets off the mat. And, for those in boxing who know him best, it’s easy to explain why.

“I TOLD YOU so,” Lillard trash-talked via FaceTime to retired champion Andre Ward, now an ESPN analyst.

Although the former pound-for-pound king was still on the SportsCenter set in Las Vegas as a ringside commentator following Teofimo Lopez’s unanimous decision victory over Vasiliy Lomachenko, Lillard did not miss the chance to rub it in Ward’s face that he was right.

“I’m still on set, this brother is FaceTiming me,” Ward recalled, laughing. “I’m like, ‘Bro, can I get done working? Man, OK, you was right … All right, you was right.’

“But Dame, he knows his stuff.”

😂 this moment👇@Dame_Lillard FaceTiming @andreward while we’re taping Sportscenter to say, “I TOLD YOU SO!”
Dame predicted @TeofimoLopez would win. pic.twitter.com/FEHVBLH6op

Ward, a fellow Bay Area native, has become close with Lillard. They have bonded over their shared passion for the sport Ward once dominated. Lillard often is on Twitter commenting on fights big and small. Sure, he’ll make predictions about Lopez-Lomanchenko, or the first Andy Ruiz Jr.-Anthony Joshua bout (which Lillard correctly tabbed as an upset win for Ruiz), but he’s also knowledgeable about fighters who might not be household names to the casual fan.

WBC lightweight titlist Devin Haney, another Bay Area fighter, developed a relationship with Lillard through his passion for boxing. Lillard proposed his boxing wish list via Twitter the day after Lopez’s win over Lomachenko, which included Lopez facing Haney — in addition to a dozen more matches, such as Caleb Plant versus Benavidez and Crawford against Errol Spence Jr.

“I’m surprised at how much he actually knows about boxing. It’s rare,” Haney said. “Most basketball players may know who I am, but they don’t really know the art and the matchups and the real business and the politics behind boxing. He actually, like, knows.”

Authenticity is the best way to describe it. Lillard’s fandom isn’t casual.

“He’s thorough. He helps the community and is real encouraging. A solid brother,” said Haney’s father and trainer, Bill. “He’s like a 100 dude. He’s not a knucklehead, but he ain’t no square cat either, though.”

Ward personally invited Lillard to Las Vegas for his highly anticipated 2017 rematch versus Sergey Kovalev, which would end up being the final fight of his Hall of Fame career. Lillard even joined Ward on stage for his interview following the official weigh-in.

Which he certainly did.

Ward ended up winning by eighth-round TKO after landing three consecutive hooks to the body.

Those prefight moments are a big reason that Lillard is drawn to boxing.

GROWING UP IN East Oakland, California, Lillard had his love of boxing shaped by his family, who gathered to watch big fights. Well before you could stream a bout, various family members would host viewing parties for pay-per-views. Sometimes Lillard’s parents would host Oscar De La Hoya’s marquee bouts at their home, such as the one against Pernell “Sweet Pea” Whitaker in 1997.

Just 6 years old at the time of that bout, Lillard still feels strongly about the outcome of Whitaker-De La Hoya. He rewatched it as recently as last season with those same feelings.

While watching boxing was a popular family pastime, Lillard found his calling on the basketball court, starting on the varsity team as a high school freshman despite standing just 5-foot-5. But he always maintained his love of the sweet science. When he left the Bay Area to attend college at Weber State, he kept up with boxing by reading online coverage, a routine he maintains to this day.

It wasn’t until years later that he turned his passion into a project.

Lillard’s older brother, Houston, connected Damian with Eren in 2014 when Houston was competing for a spot on the Portland Thunder, an arena football team. The two have regularly worked together in the offseason at Gem Fitness in Tigard, Oregon, ever since.

For Lillard, who had previously used a heavy bag at his home to “blow off steam,” getting into the ring wasn’t something he took lightly. He knew if he was going to work out like a boxer, he needed to be all in.

“I was in there every day, literally like a fighter,” he said. “I’ve got boxing shoes and all that, trunks — I’ve got everything.”

Lillard increased the intensity of his workouts during the NBA’s coronavirus-induced hiatus last season, using the break as a modified offseason. After leading Portland to the first round of the playoffs in the NBA bubble, he resumed his offseason ring work to stay sharp, not knowing when this season would begin.

When Lillard is in training mode, he begins work as early as 7 a.m. with lifting and conditioning. Then he slips on the gloves, going through as many as 8 to 10, 3-minute rounds on the mitts. Lillard focuses on throwing proper jabs, combination punching, operating at different angles, and moving his feet. He’s seeing what it feels like to counterpunch, using his hips to punch, snapping and following through on his jabs and transferring power into his shots.

“Not anybody can be a fighter,” Eren said. “[Lillard] challenges himself. There’s times where I’m like, ‘you know what, keep going.’ And he’ll be like ‘aw, naw, my shoulders,’ and I’m like ‘nope, I want you to keep going.’ So when it comes to boxing training, his ability to work is second to none.”

Lillard puts the gloves away during basketball season, so he doesn’t risk injury, but the offseason work has paid off in noticeable ways for the five-time All-Star.

“I feel like my legs are a lot stronger because I train in the ring so much,” he said. “My legs don’t wear out as fast.

“[In boxing] You’ve got to keep moving. Your arms are up. I feel like I’ve been able to shoot the ball easier from deep probably because my shoulders are more broad now. I’m stronger up top because this is hard to do. It’s hard to keep your hands up and you feel it. I feel like in small ways like that, it’s probably played a part.”

Ward praised Lillard for adding boxing to his workout regimen.

“That’s what I respect about him,” Ward said. “I see him in the boxing gym, incorporating that in his game … I mean, there’s no better cross-training workout than boxing for any athlete. Football, tennis, basketball, you name it.”

Although he doesn’t participate in intense sparring — “Obviously, [the Trail Blazers] would never really approve it,” he said — Lillard once toyed with the idea of participating in an exhibition bout. Former NBA guard Nate Robinson’s stunning knockout loss to YouTube sensation Jake Paul last November on the Mike Tyson-Roy Jones Jr. undercard isn’t the reason Lillard gave up that idea, but it certainly didn’t help.

“I feel like he got in there really feeling like he could win, but I don’t think boxing is a sport you can take six months or eight months and be like ‘all right, I’m gonna go in here and fight,'” Lillard said. “Basketball for me is a lifetime investment. I’ve spent my whole life doing it. I’ve got a Ph.D. at this. I’m comfortable every night when I get on the court because I know that it’s been my whole life just going. So, if I just go take a few months to train and work at something and all that, it’s like, ‘What you expect to happen?'”

Lillard is confident in his skills in the ring, but likened the idea of him taking on a real fight to a casual basketball player trying to join the NBA at 28 years old. When it comes to professional boxing, he’s content to remain a spectator.

“I would just be out there like, ‘all right, I’m gonna box just to box,'” he said. “I think that’s a mistake that people make. You can get hurt in boxing. You don’t play boxing.”

For now, Lillard will continue to play basketball, using his fighter’s mentality to help keep Portland in the thick of the Western Conference playoff race. The Blazers are in fifth place, having won six of their past seven games largely thanks to Lillard, who is averaging nearly 33 points during the recent run. He has been at his best in the fourth quarter — Dame Time — as the offseason workouts that have increased his stamina and leg power continue to pay off.

Terry Stotts has coached Lillard throughout his nine-year tenure in Portland and still struggles with words to describe those special moments when Lillard can will his team to victory. After his game-winning shot in Chicago, Stotts called it “easy to see, but it’s hard to describe.”