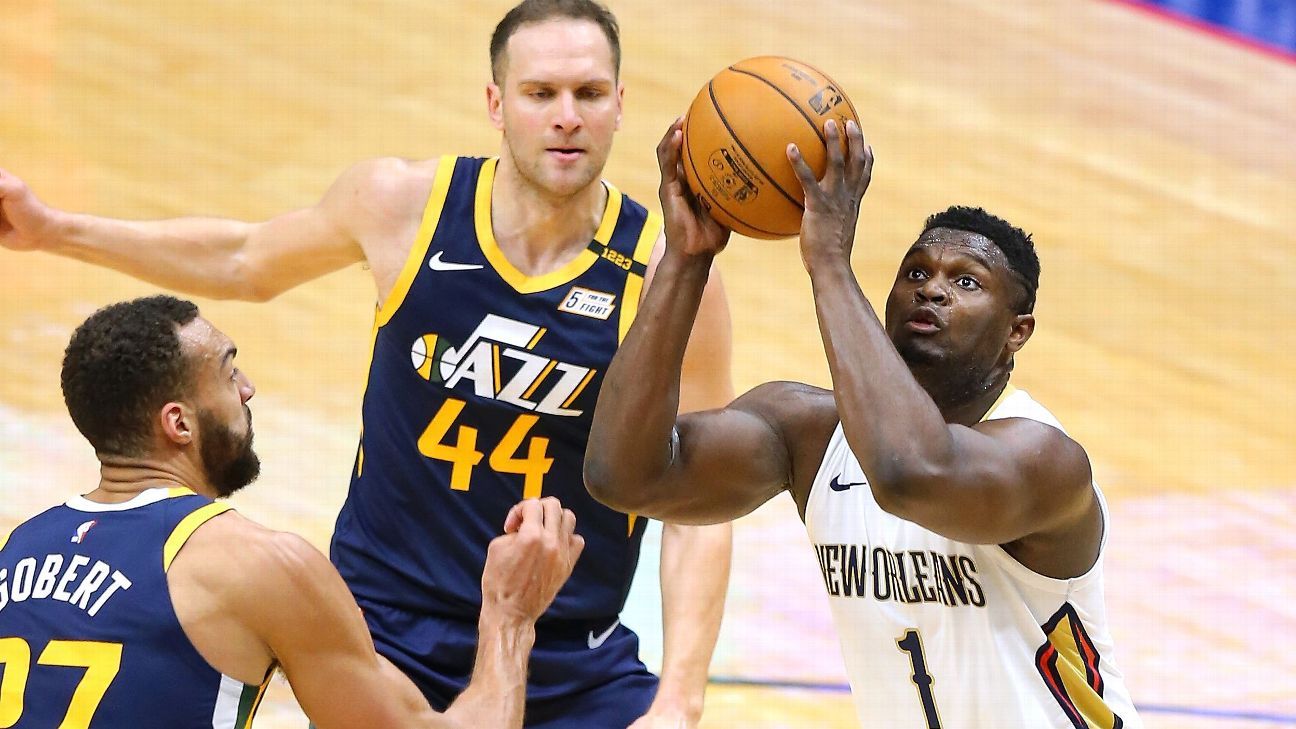 Last Saturday following a disappointing loss to the San Antonio Spurs, New Orleans Pelicans forward Zion Williamson told reporters he felt like his team was close to what it wanted to be. The Pelicans had just played two tough games with losses to the Milwaukee Bucks and the Spurs, but he thought things could turn around soon.

Consider Monday night a step in the right direction.

Behind Williamson’s charge in the third quarter, the Pelicans toppled the team with the best record in the league, holding on late to defeat the Utah Jazz, 129-124.

The Pelicans held a 17-point lead early in the fourth quarter, but watched the Jazz cut it all the way down to 1 in the final minute before holding on with a pair of stops on Utah’s final three possessions. Pelicans coach Stan Van Gundy joked that his team didn’t hold on to the lead as much as it was able to build it up high enough to where Utah couldn’t come back.

Williamson scored 15 of his 26 points in the third quarter as the Pelicans built their lead.

“My mindset was whatever I can do to get my teammates energy, that’s what I’ll do,” Williamson said. “In the third quarter, after the first two quarters of me reading their defense, I really got a feel for it and I was on the attack.”

Attacking the basket was the Pelicans’ focus throughout the night. They finished with 74 points in the paint, the most any team has scored in the paint in regulation against the Jazz in the last 25 seasons, according to ESPN Stats & Information research.

“It’s crazy that we got to the basket so much with a defensive player like Rudy Gobert, where he’s at the rim all night, every single night,” Pelicans forward Brandon Ingram said of Utah’s All-Star center. “But we made it happen.”

Scoring so much in the paint meant the Pelicans didn’t have to rely on 3-point attempts. New Orleans went 7-for-11 from 3-point range, and the 11 attempts were the fewest in a game by any winning team over the last four seasons, according to ESPN Stats & Information research. Coupled with Utah’s 43 attempts from deep, the game had the largest differential between two teams for 3-point attempts this season.

When Williamson was scoring in the third quarter, the Pelicans stayed with him and he even went directly at Gobert, a two-time Defensive Player of the Year, on a few occasions.

“It means he’s fearless,” Ingram said of the 20-year-old Williamson. “Knowing that [Gobert is] a two-time Defensive Player of the Year or just a really, really, really good defensive player, he’s just fearless. He knows the angles of the shot. He knows what to do when he goes into the game. He’s not going to waver for anybody. He’s going to keep going and keep going until he gets to where he wants to get to.”

So far this season, the Pelicans have wins over Utah, Milwaukee and the Phoenix Suns as well as a 24-point comeback over the Boston Celtics, but also have losses to the Detroit Pistons and Minnesota Timberwolves, teams at the bottom of the standings in their respective conferences.

For a team Williamson thinks is “almost there,” Van Gundy said the Pelicans are talented enough to beat anybody in the league, but they make too many mistakes and haven’t been consistent enough on defense to string together wins the way they want to.

“For us to take it to the next level, we have to continue it for the next few games,” Williamson said. “We gotta be consistent with it.”