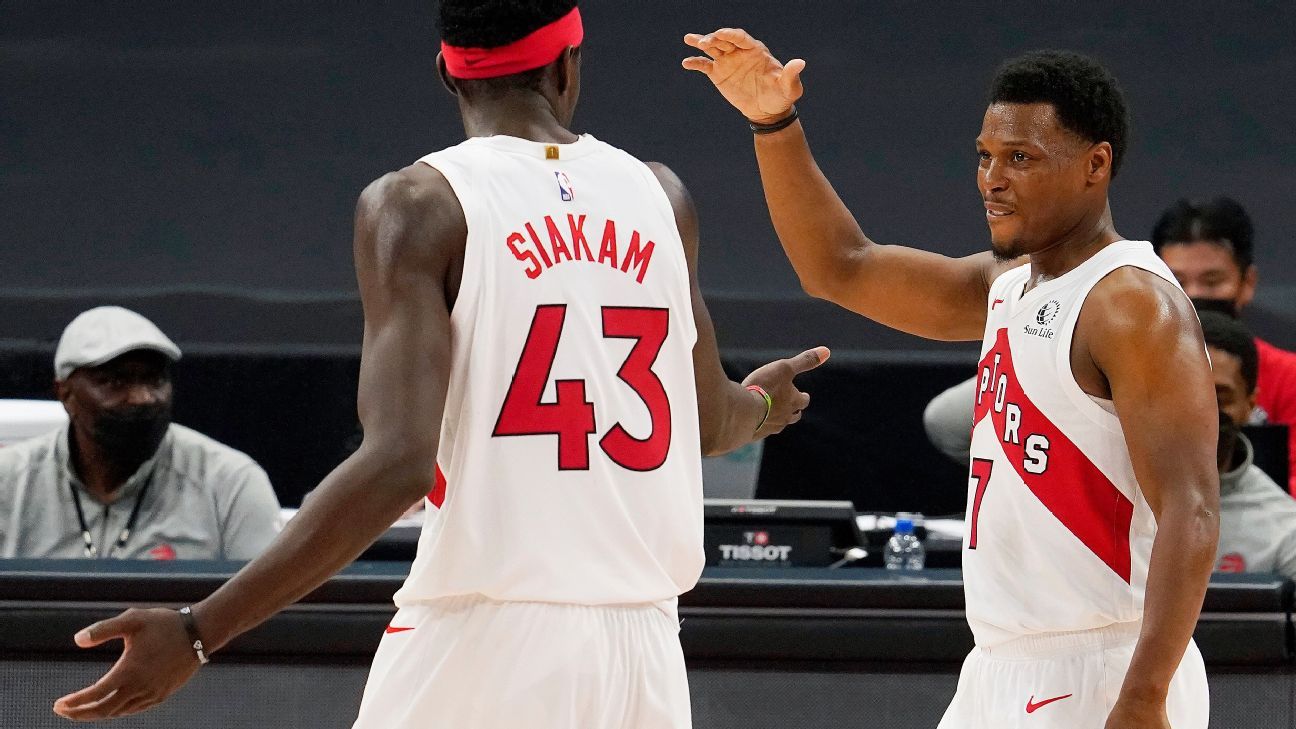 But that didn’t stop an air of finality from hanging over the proceedings following a 135-111 victory over the Denver Nuggets, as the greatest player in Raptors franchise history spoke to the media for what likely will be his final time in a Toronto uniform.

“It was kind of weird tonight not knowing what the next step would be just with understanding there are things that could possibly be done,” Lowry said. “It was different tonight, for sure.

Although the Raptors’ win snapped a nine-game losing streak, giving them their first win since Feb. 26, the focus after the game was almost exclusively on what will happen Thursday, when the Raptors won’t play a game but will instead potentially trade away two stalwart members of the team’s massively successful run over the past few seasons in Lowry and guard Norman Powell.

Both players are on expiring contracts, and with Toronto plummeting down the East standings and in the middle of a season being spent in Tampa, Florida, because of the ongoing COVID-19 pandemic, they enter Thursday as two of the best players to potentially change teams.

It was a big enough occasion that Canadian icon, and frequent courtside Raptors fan, Drake spoke to Lowry via FaceTime in the middle of his postgame media session, offering to translate his answers to the media — an offer Lowry declined.

Lowry began his media session by saluting the five women on Maple Leaf Sports & Entertainment — Meghan McPeak, Kia Nurse, Kate Beirness, Amy Audibert and Kayla Grey — who earlier became the first all-female NBA broadcast crew. He spoke fondly about his time in Toronto. He talked about how, after an up-and-down first few years of his career, he found a home with the Raptors, the team that forged him into a star and future Hall of Famer and with whom he won a championship two seasons ago.

“Well, I think if you go back, [then-Raptors general manager] Bryan Colangelo traded for me to become — unfortunately they missed out on Steve Nash — and he traded me to become the point guard,” Lowry said, referring to the trade that brought him to Toronto from Houston in 2012. “The trade was made for me to be given the keys. And honestly, like, you know, I wanted to take advantage of it.

The same sentimentality about Lowry’s time in Toronto also translated to his teammates and coaches — all of whom have come to Toronto after Lowry did.

“We’ve developed together really,” Raptors coach Nick Nurse said. “I always say when he kind of first, when I first got here, I was new to the NBA and he kinda wasn’t really a starting player, like legitimately starting.

“So it’s been that growth all the way to six-time all-star, Olympic gold medal, and an NBA title which is really incredible for Kyle Lowry, I think. And he’s broken most, or he’s really high up there, on all the Raptors records, he’ll go down as maybe the greatest Raptor ever, I think, to date.”

Lowry, though, wasn’t the only one who was potentially facing his last night as a Raptor. Powell, who has only played for Toronto in his six NBA seasons, could also be on the move tomorrow.

He said that the strangest part of the days and weeks leading up to Thursday’s deadline wasn’t hearing his name being bandied about in the media, but instead in the conversations he’s had with members of Toronto’s organization about what it will be like for him to play elsewhere.

“I haven’t been watching SportsCenter, to be honest,” Powell said. “I really don’t see a lot of stuff. I mean it’s weird around me. I feel like, with some people in the organization I’m always being asked what can happen, this, that and the other. But I tell them the same thing every single day. Some of the people in the organization, our medical staff were emotional and things like that, and I’m telling them to relax and calm down.

“But it’s a business. You build connections with people … it doesn’t really bother me any type of way. Whatever happens, I can’t speak on emotions that aren’t here right now. I’m going to wait and see like everybody else.”

Things are different, though, for Lowry, whose transformation from NBA vagabond to All-Star and champion has mirrored the Raptors’ rise from a forgotten franchise to one that has been a consistent winner for the past several seasons. That, despite the fact that he and his teammates haven’t played a game in Toronto in more than a year, has forged a connection that adds extra meaning to whatever happens Thursday.

Lowry, who has already said in a previous media session that he will retire as a Raptor no matter what happens at the trade deadline or this summer in free agency, will turn 36 on Thursday.

He said he hopes to play golf and will have his phone on but will just wait to see what his agent, Mark Bartelstein, has to say when he calls him, as opposed to staring as his phone waiting to see what will take place.

Whatever it is he winds up hearing, Lowry said he’ll be at peace with whatever jersey he’s going to put on once Thursday’s deadline passes.

“At the end of the day, everything will be fine no matter what happens.”

And, if he’s no longer in Toronto, Lowry will leave behind an indelible mark on a franchise that he’s made his own over the past eight-plus seasons.

“I’ve heaped about as much praise as I can on him, [and] I certainly don’t mind doing that,” Nurse said. “My one comment that I always make, that I think is the highest compliment I give him is he plays harder than anybody I’ve ever seen.

“On the court coaching or coaching against or watching games or anything, he plays harder than anybody I’ve ever seen. I can’t give him a higher compliment than that.”

Embiid latest Sixer with foot injury, will sit next 2
The Whiteboard: What’s wrong with the Warriors bench?
Lillard (right leg) to be reevaluated in 1-2 weeks
For the struggling 76ers, it might get worse before it gets better
LeBron James shades the Lakers with cryptic comments on Aaron Rodgers