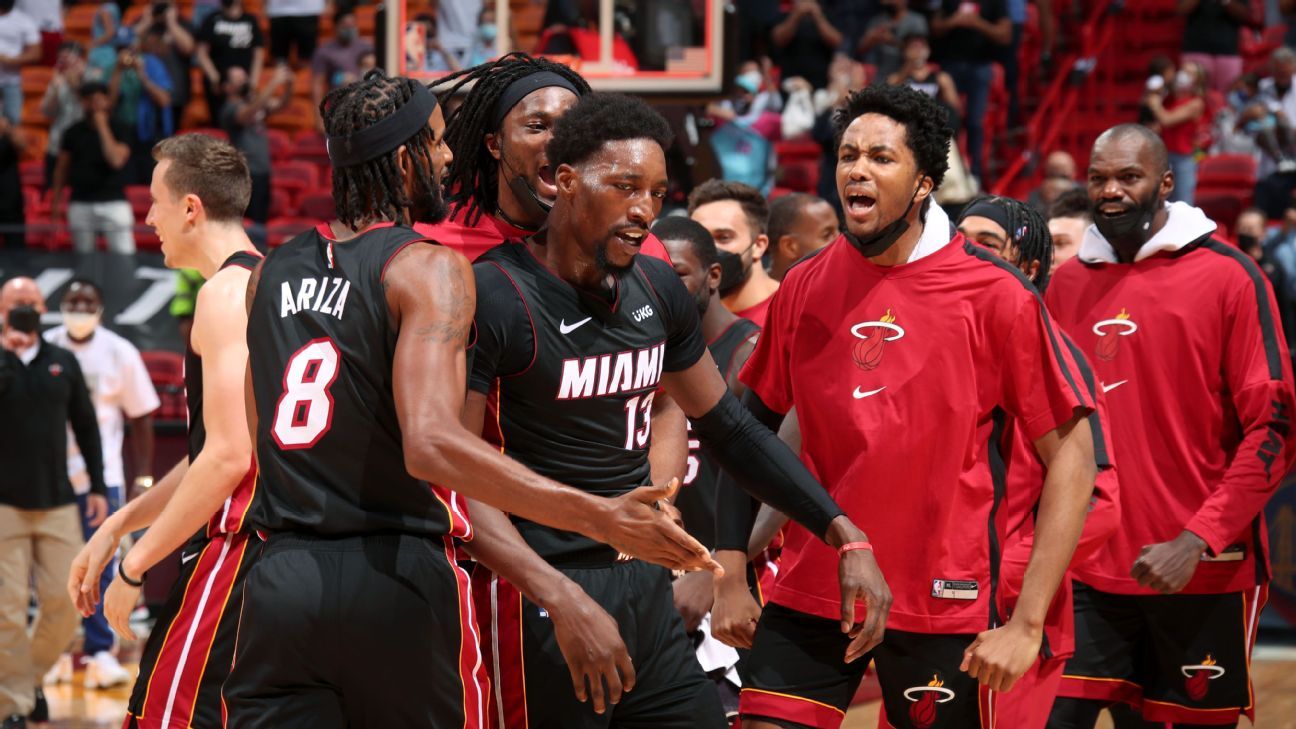 Miami Heat big man Bam Adebayo pulled out his phone, looking to see who had texted him after his game-winning baseline jumper to beat the Brooklyn Nets on Sunday, 109-107.

“Let’s check,” he said, scrolling through a pile of messages. “My mommy. Juwan Howard. And all my friends and homeboys. Closest people.”

With the game tied, the Heat cleared out one side of the floor for Adebayo. Guard Goran Dragic fed him the ball and Adebayo faced up at the 3-point line against Nets forward Jeff Green. Dragic faked a screen and popped open on the other wing briefly, but Adebayo held up his left hand briefly, as if to say, ‘I got this.’ He drove left on Green, gave a small shoulder to create separation and pulled up from about 12 feet, rattling home the winner.

“He handled it the right way,” Heat coach Erik Spoelstra said. “He looked over to the bench, and at that point we just made eye contact. My hands were up, and it was like, ‘OK, it just better be the last shot.'”

Adebayo’s game-winner was the first for the Heat since Dwyane Wade hit one in 2019 and Adebayo confessed postgame he had thoughts of going full D-Wade in the celebration. “I wanted to stand up on the table like D-Wade,” Adebayo said with a smile. “But not today.”

Adebayo said he’s “always dreamed of that moment,” it being his first NBA game-winner, and his first game-winning shot since high school (a game he dropped 50 in, he made sure to note). But it could also potentially be something bigger — a possible spark to the Heat’s roller-coaster season.

“A season can turn around after a game,” Adebayo said. “Crazier things have happened in this league.”

After making a surprise run to the NBA Finals in the bubble last summer, the Heat started the season slowly, falling seven games below .500 in early February. A 15-4 stretch righted the ship prior to the All-Star break, but with another recent slide, the Heat currently sit seventh in the East at 29-28 and if the season ended today, would take on the 8-seed Charlotte Hornets in the play-in round.

They are also only 1.5 games behind the New York Knicks to escape the opening play-in round.

After a three-game losing streak this week culminating with a stunning loss to the league-worst Minnesota Timberwolves, guard Jimmy Butler had a message on Friday, calling the Heat soft and specifically focusing on Adebayo saying he needs to play “bully ball.”

With Butler out with a sprained ankle against the Nets, Adebayo took over the bulk of the offensive responsibility scoring 21 points on 9-of-16 shooting, plus 15 rebounds and 5 assists.

“It’s just not about scoring,” Spoelstra said. “That’s the hard thing in this league, that the main thing people look at is how many points people score. Bam has so many things that he does for us that are important for us to be successful.”

Case in point, Adebayo’s defense down the stretch was critical, with him switching onto Kyrie Irving multiple times, including on the final Brooklyn possession where he forced a contested step-back miss by Irving on a straightaway 3. Per ESPN Stats & Info, when defended by Adebayo, the Nets shot 3-of-17, with Irving specifically going 0-of-8 when guarded by Adebayo.

“He has great potential,” Dragic said of Adebayo. “I still feel he’s not done yet. He’s gonna hit another level.”