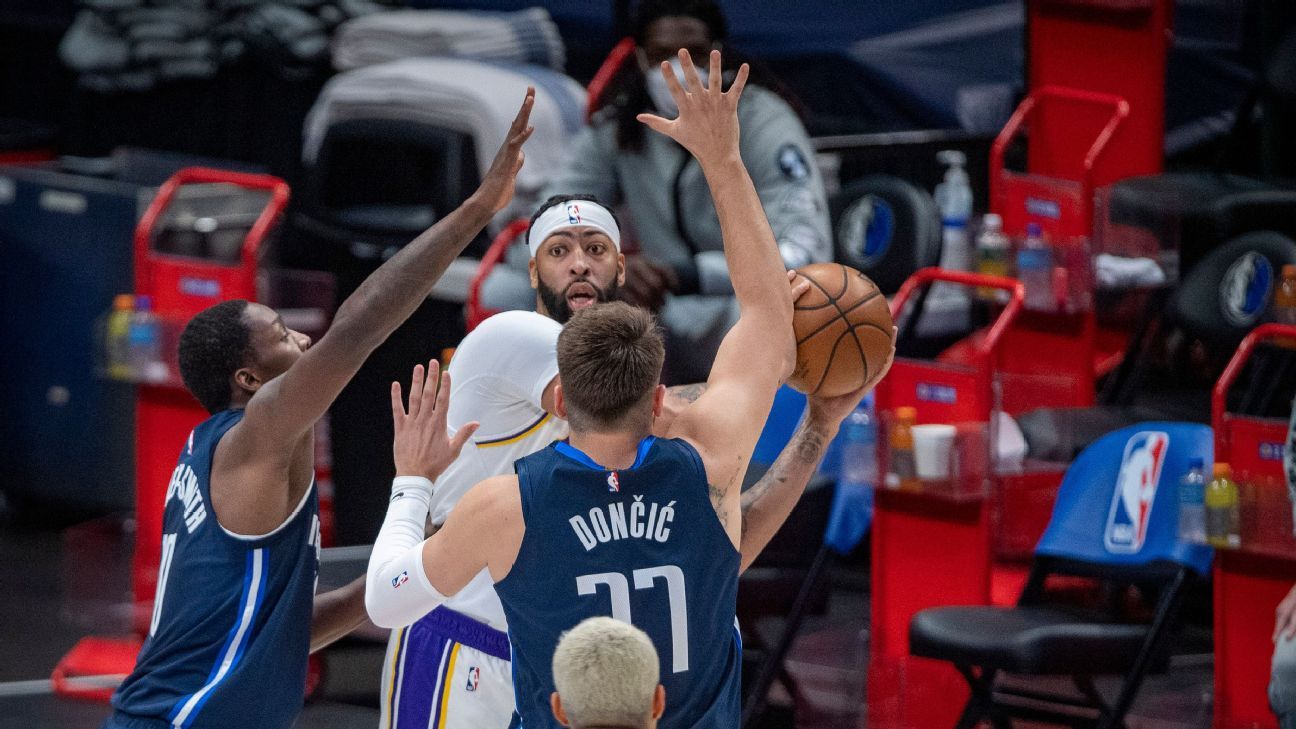 There’s only a dozen games left in the regular season for the Los Angeles Lakers after Saturday’s 108-93 loss to the Dallas Mavericks. And even though the defending champions have been playing together for more than four months since the start of training camp, Lakers star Anthony Davis said the critical juncture the team finds itself in feels like a complete reset.

“It’s like you’re starting over with the guys and just trying to find a connection with these guys again,” Davis said after his first two games back from a nine-week absence amounted to going 7-for-29 from the field in two losses. “They’re trying to find a connection with me. So, it’s like we’re starting from zero, which is tough so late in the season.”

Davis’ return from a calf strain and Achilles tendinosis in his right leg didn’t give L.A. the immediate lift it was hoping for. The Lakers are currently on a three-game losing streak and with two of those defeats coming against Dallas, their hold on the No. 5 seed in the Western Conference standings was cut to a precarious 1 1/2 game lead over the Mavs.

Davis scored 17 points in 28 minutes on Saturday and shot just 5-for-19 while doing so — including a 1-for-5 mark in the fourth quarter when Dallas outscored the Lakers 29-14 to turn a tied game after three into a blowout.

“We’ve got to be able to get some wins,” he said, looking ahead to the final two games of their road trip against the Orlando Magic and Washington Wizards. “This was tough for us. Orlando and D.C. are must wins for us, for sure.”

The alternative would seemingly be disastrous as the Magic are 23 games below .500 and the Wizards are seven games below the even mark, but have gone 9-1 in their last 10 games.

Also chasing the Lakers, two 2 1/2 games behind, are the Portland Trail Blazers, currently in the No. 7 spot. Seed Nos. 7-10 will participate in a play-in tournament to earn the final two postseason berths at the conclusion of the regular season. The higher-seeded teams in the 7 vs. 10 and 8 vs. 9 matchups will need to win one game before the lower seeded teams can win two in order to advance.

While Lakers coach Frank Vogel said before the game, “honestly, the standings don’t really matter to us,” and Kyle Kuzma echoed him afterwards by saying, “it matters for a lot of other teams in the league … I don’t think it matters much for us,” perhaps L.A. should take heed. Especially with point guard Dennis Schroder admitting after the Dallas loss that L.A. would be in adjustment mode with Davis’ re-integration and LeBron James‘ yet-to-happen return, “even probably some games in the playoffs.”

If they’re anticipating the recalibration period to last that long, securing the No. 6 seed or higher will bring with it the breathing room of a guaranteed seven-game series, rather than hoping those tweaks don’t become problematic in a play-in scenario.

Vogel already made one adjustment to his rotation on Saturday, keeping Montrezl Harrell on the bench all game for the first time all season with a DNP. While the move was meant to free up minutes for Marc Gasol at backup center, even Gasol acknowledged how difficult the change was.

“It’s not an ideal situation for anybody,” he said. “We have a very deep team and if coach wants to play three guys or two guys for one spot, it’s going to take a lot of buying in.”

When questioned if Vogel’s communication helped him navigate his own personal stretch of three straight DNPs prior to Saturday, he quipped, “You guys are asking the wrong guy. It’s coach’s decision. It’s coach’s call. … So, don’t ask me. I just work here.”

It’s as if Davis’ return solidified just how much more work the Lakers have to do to get themselves right before they can be looked at as top contenders again. Davis’ mere presence wasn’t an immediate panacea. James’ eventual return — which could still be a week or two away — might not be either.

“We’re going to talk about it,” Schroder said, acknowledging the kinks that need to be ironed out. “I think when Bron comes back, we’re going to have a conversation as a team. Because our chemistry, like AD said, off the court is great. But on the court, we just got to turn it up some more.”

Indeed, they will attempt to turn it up more with less and less time remaining in the regular season before the games really count and their repeat title bid is on the line.

“You’ve got to try and figure it out on the fly,” Davis said, “which we’re going to have to do.”