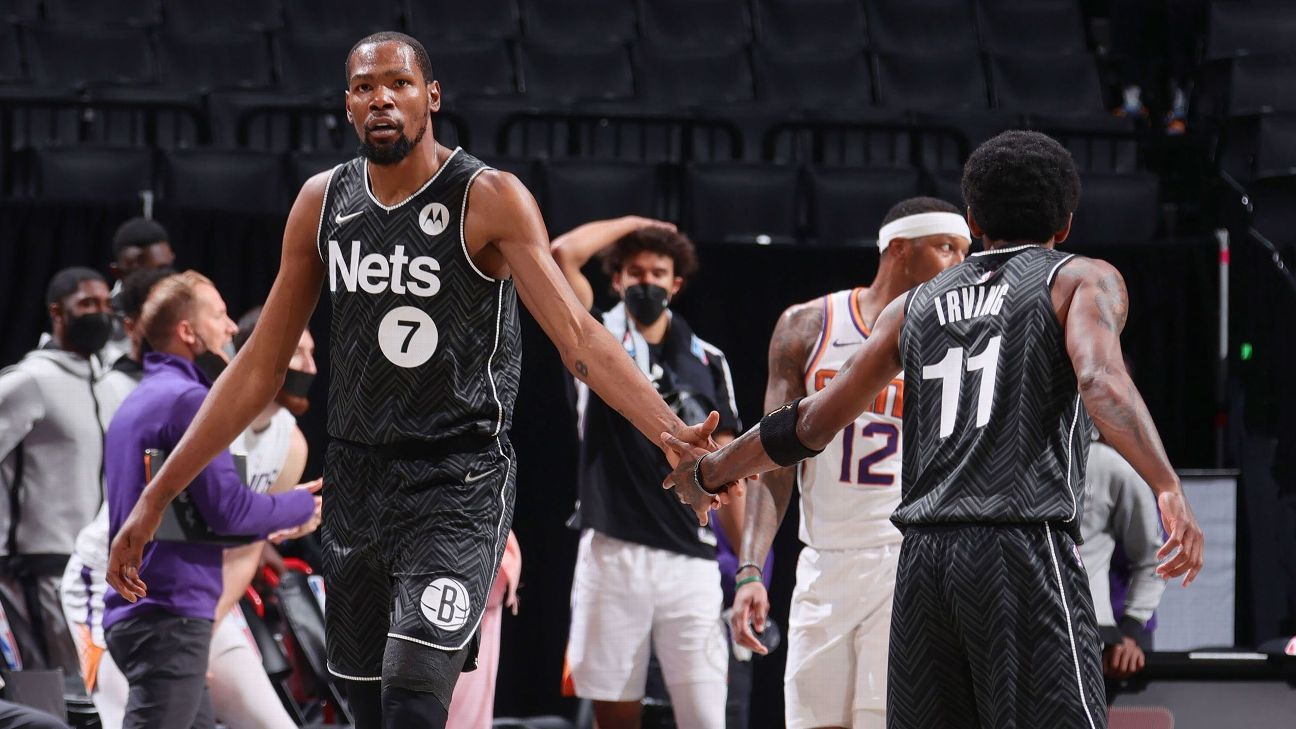 After missing the past three games because of a bruised thigh, Brooklyn Nets forward Kevin Durant returned on Sunday and erupted for 33 points in 28 minutes in a 128-119 victory over the Phoenix Suns.

“It’s like riding a bike,” Durant said. “You get your footing right and just get your rhythm going, and I think my teammates did a great job of looking for me all game, and I just wanted to resort back to that work I put in. The shots I work on at practice and shootaround, try to get to those as much as possible to gain my rhythm and then start to get a little more creative as the game progressed. It was a good start. Hopefully I build on this game and keep going.”

For the third time this season, Durant came off the bench for the Nets, checking in with 8 minutes left in the second quarter. The Nets wanted to backload Durant’s minutes, playing him more in the second half where he spent 20 of the final 24 minutes on the floor.

Coach Steve Nash said in consultation with the performance staff that the plan was to keep Durant at around 28 minutes of playing time. Choosing how to best allocate the minutes led to the option of bringing Durant off the bench.

“You think big picture. I’d rather fall behind and have Kevin in the back pocket than go up and have to say, ‘OK, Kevin, you’re done,’ in the third quarter,” Nash said. “I think that’s kind of the give and take with it, and he’s been on board with it, so props to Kevin to being willing to try something like this that I think gives us a chance to be as flexible as we can be under these circumstances.”

Durant seamlessly fit back into the Brooklyn offense, playing off Kyrie Irving who cooked from tipoff, scoring 34 points on 10-of-19 shooting (5-of-7 from 3) plus 12 assists.

“It’s more the norm than the extraordinary for those two,” Nash said of the two stars’ combined efficiency.

It’s one of Durant’s many rare talents, an ability to find an instant rhythm and withstand any possible rust from a long layoff. Durant has had to deal with a run of injuries and issues the past two years, starting with his Achilles injury two years ago, then league COVID-19 protocols forcing him to sit this season, then a hamstring injury that forced him to miss multiple weeks.

“Kevin has shown his scoring doesn’t seem to get affected by a long layoff, whether it was coming off the Achilles or coming off the hamstring,” Nash said. “He seems to come right back and his rhythm and timing are excellent. It’s very impressive, for sure.”

The Nets took control of the game late in the third quarter and early fourth as Durant heated up with a flurry of buckets. Even without James Harden, who continues to recover from a strained hamstring, the Nets handled the Suns, who had just gone on a tour through Eastern Conference peers like Milwaukee, Philadelphia and Boston.

“It’s just another game. I think they look at us as a measuring stick,” Durant said of the Suns. “They’re fresh on the scene as an elite team so this is pretty new to them. So we wanted to gauge and take that physicality they bring, the toughness and quickness they bring, but that’s all it was. Another day at the office.”

As the Nets plod through the remainder of the schedule, the focus is on recapturing chemistry and rhythm for their primary rotation pieces, while also keeping an eye toward health and wellness. With the win, the Nets have taken a 1.5-game lead for the East’s top seed over the 76ers.

“Right now, especially this point of the season, it’s about working on us,” Blake Griffin said. “We haven’t all been on the floor together and we’re coming down the stretch here where we really need to tighten things up.”