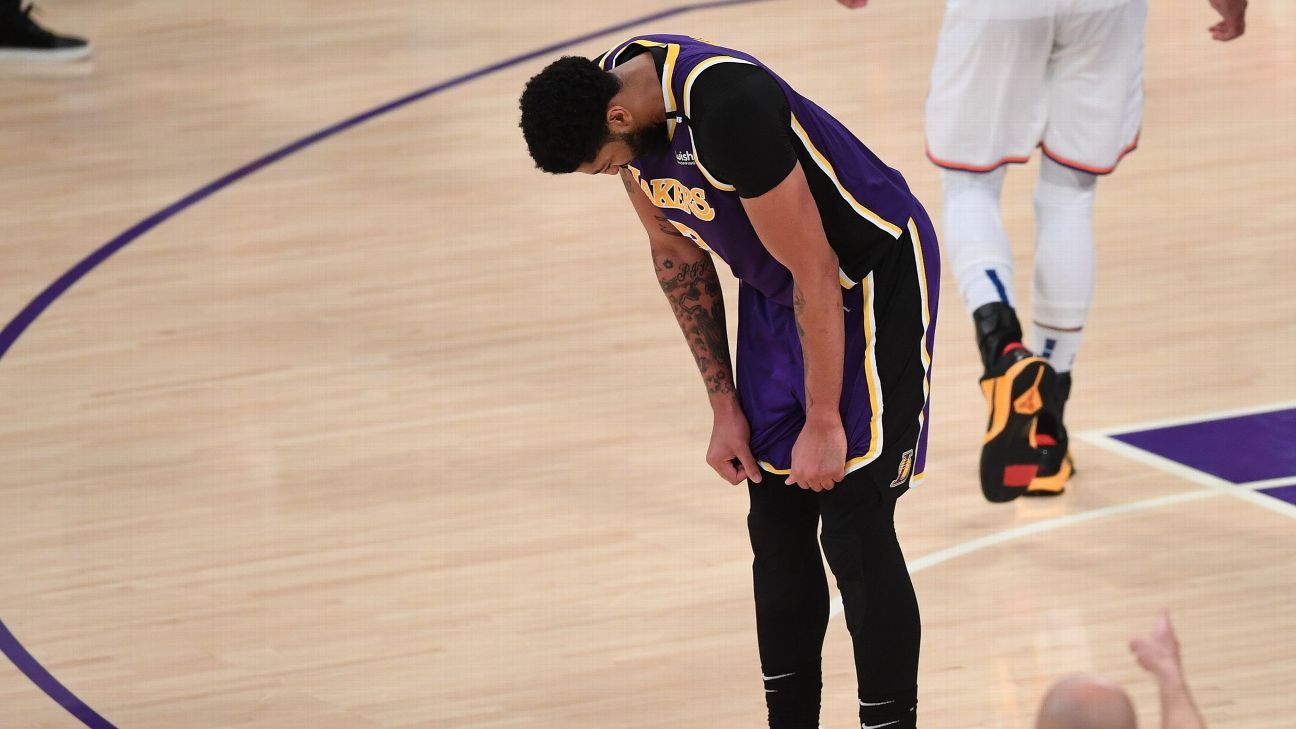 LOS ANGELES — The final few possessions that Talen Horton-Tucker was involved in during the Los Angeles Lakers‘ 101-99 overtime win against the New York Knicks on Tuesday mimicked the situation his team finds itself in as the regular season winds down.

Things might not have gone as planned up to this point, but there still could be some magic in store for the defending champs.

Horton-Tucker, playing point guard down the stretch with Dennis Schroder still sidelined because of the league’s health and safety protocols and Alex Caruso leaving the game early with a sore right foot, had back-to-back turnovers in OT, only to bounce back by hitting the go-ahead 3-pointer with 21.1 seconds left to lead L.A. to victory.

“Honestly, just, I was trying to make up for [the turnovers],” Horton-Tucker said after finishing with 13 points and 10 assists in 34 minutes off the bench. “Just being in that position, I thought, ‘Why not?’ The opportunity presented itself, and I just tried to keep my confidence and good things happen.”

L.A., now trailing the No. 5 Portland Trail Blazers and No. 6 Dallas Mavericks by a game apiece, still has an opportunity to lift itself out of the No. 7 spot in the Western Conference standings and avoid the play-in tournament.

If the Lakers go 3-0 to finish the regular season, with a home game against the Houston Rockets on Wednesday and a road back-to-back to close things out Saturday against the Indiana Pacers and Sunday against the New Orleans Pelicans, they can move up over the Blazers or Mavs if either team goes 1-2 or worse down the stretch.

Portland plays on the road against Utah and Phoenix and home against Denver to close things out. Dallas has it easier with home games against New Orleans and Toronto and a road game in Minnesota.

The Lakers hope to have LeBron James back in the lineup for Wednesday’s game against Houston. He’s expected to return soon from a five-game absence spent rehabbing his high right ankle sprain that had already caused him to miss six weeks.

Nearly seven months to the day after winning the 2020 NBA title in the bubble in Orlando, Florida, the team will unveil its championship banner in front of nearly 3,000 fans at Staples Center before the Rockets game.

But L.A. could still be undermanned even with the return of James, as Anthony Davis said he would not know his availability for the Rockets game until going through treatment for a strained groin on Wednesday afternoon.

“I’m hurting,” Davis said after Tuesday’s game. “Not more so my body, just my groin got tight. … I’m not sure about [Wednesday]. I mean, I’m going to get treatment and see how I feel. I want to say I’m going to play, but it was really bothering me tonight. We’ll see how I feel tomorrow, and then later on in the day.

“Very, very strong possibility that I fight through it and play since the next day is an off day. But I also don’t want to have this lagging and then now I’m out for a couple games.”

The Lakers also lost Caruso, who could not finish Tuesday’s game because of a sore right foot that he’d been playing for about the past week.

If Caruso and Davis cannot go against the Rockets, L.A. will simply plug and play other guys, something it’s gotten used to this season.

“The thing we talk about all the time is being a team-first team,” said Lakers coach Frank Vogel. “That everybody matters, everybody’s got to stay ready. That’s never been more true than the last couple weeks when guys were called upon where they weren’t expecting it and they come in and step up. … Just speaks to our identity that every player matters, every player’s important and we’re going to need everyone.”

Anthony Davis snubbed from NBA All-Star Game and Lakers fans are in their feelings
The Bulls must choose a path at the NBA trade deadline
Irving: Felt ‘very disrespected’ at times with Nets
NBA Trade Rumors: 3 players Suns can trade for after missing Kyrie Irving
Heat vs. Knicks prediction and odds for Thursday, February 2 (Fade Knicks at home)