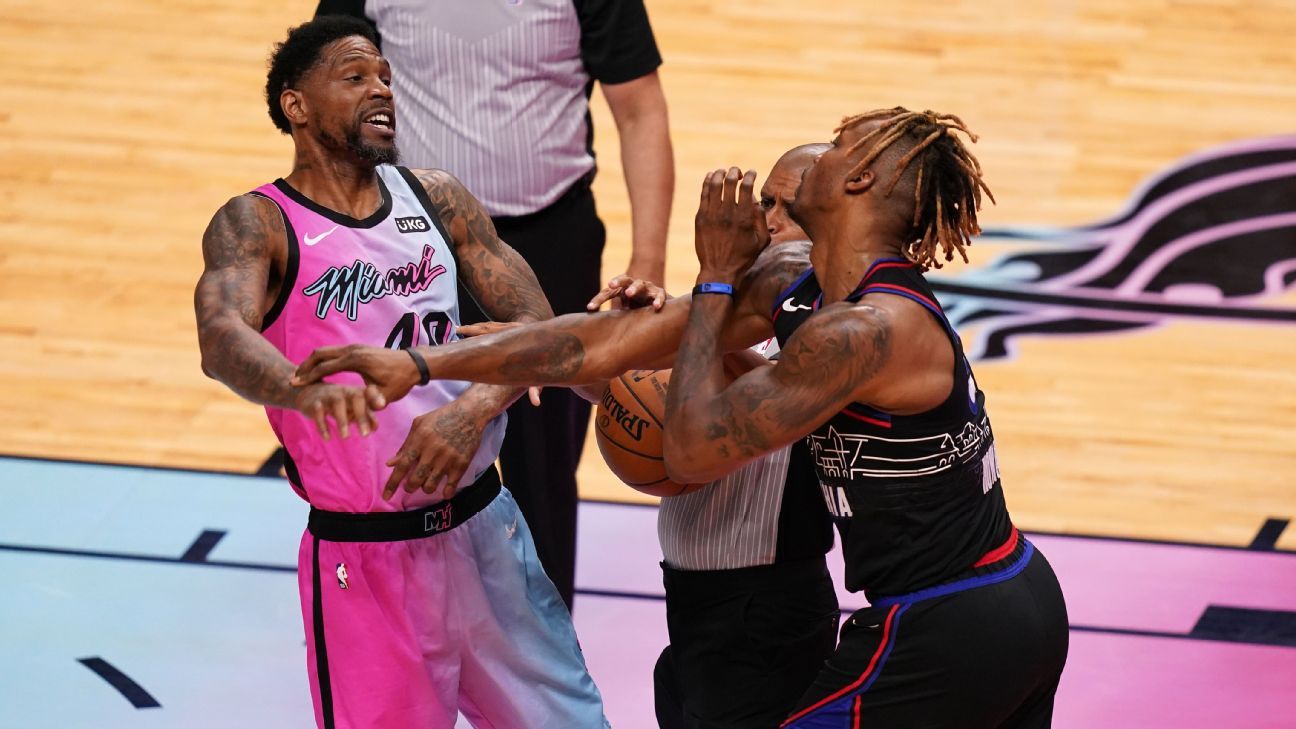 It took almost five months for Udonis Haslem to play in a game for the Miami Heat this season — and he didn’t last very long.

Haslem, who appeared in a game for an 18th straight season, played three minutes before getting ejected early in the second quarter of Thursday night’s game against the Philadelphia 76ers.

He checked in with 59.3 seconds to go in the first quarter of what is Miami’s final home game of this season, getting a standing ovation from the several thousand fans in attendance.

And, briefly, he had some success. The first time he touched the ball was to nearly save it on the baseline late in the first quarter, and he followed that up with a nice catch and finish on the break to end the quarter. Haslem then took a charge on the first possession of the second quarter, and followed that up with a baseline jumper from the deep corner in front of Miami’s bench a couple of possessions later.

But after Sixers center Dwight Howard threw Haslem to the ground on one possession, Haslem sat on the ground for a moment, appearing to gather his thoughts, before eventually getting up. At the next whistle, however, he got into Howard’s face before shoving him, resulting in him being ejected from the game.

The irony of Haslem’s dustup with Howard was that earlier in the first quarter, he had served as a mediator when teammate Trevor Ariza got into it with Sixers superstar Joel Embiid after Ariza took exception with Embiid rolling into Ariza’s leg, causing him to hurt his ankle.

A Miami native, Haslem has only played for the Heat, whom he signed with in 2003 as an undrafted free agent after spending his first year after college at the University of Florida playing in France.

He told reporters in Miami recently he was unsure whether he would return next season for a 19th year in the NBA, though it’s clear the Heat will continue to employ him for as long as he wants to be around.

“I haven’t thought about it,” Haslem said. “But I’m sure [Heat coach Erik Spoelstra] and our guys keep those things close to hand and understand the importance of that. But for me, if we don’t win the Detroit [regular-season finale] and I got in, it really wouldn’t matter.

“My thing is, let’s win out this season, let’s get this best playoff spot we can possibly get and let’s go in here and try to get it done.”