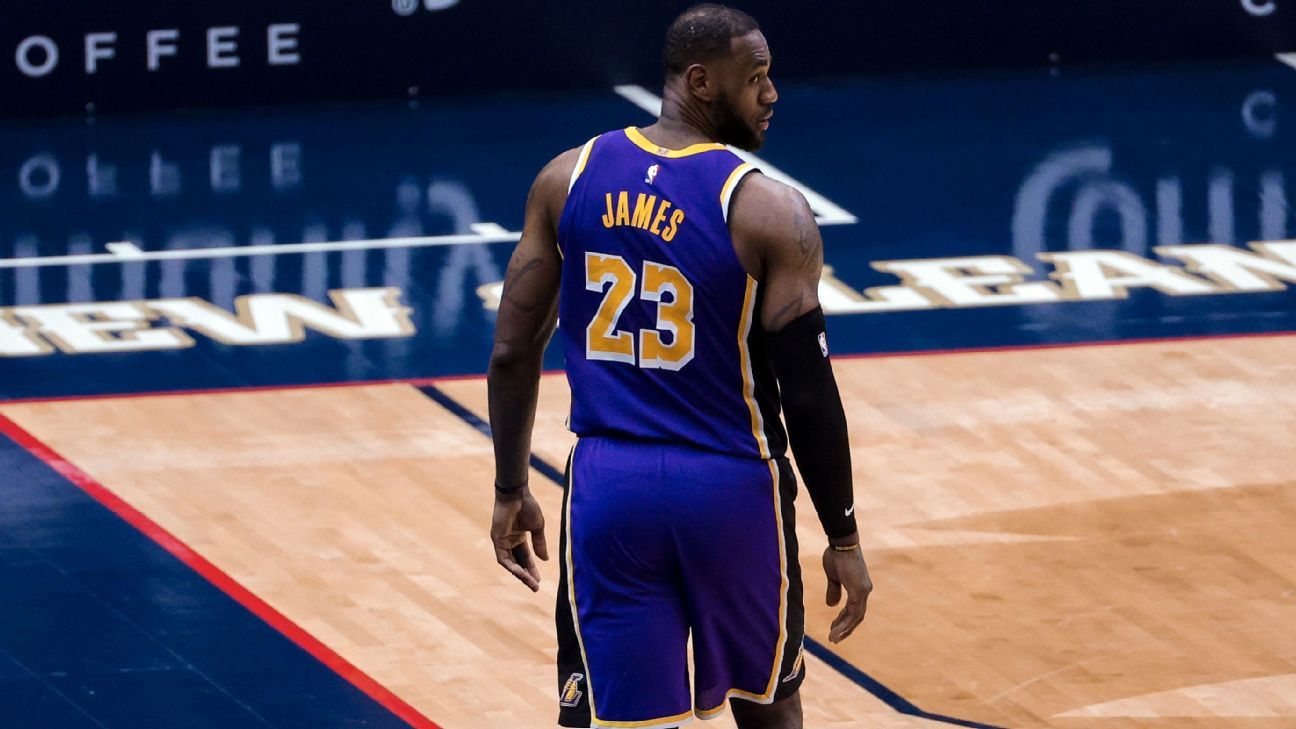 The Los Angeles Lakers‘ repeat title bid will commence with LeBron James facing a familiar foe in the Golden State Warriors during the play-in tournament, led by James’ pick for MVP, Stephen Curry.

“I mean, just look at what he’s done this year,” James said after L.A.’s 110-98 win at the New Orleans Pelicans, coupled with a Denver Nuggets loss on Sunday, locked the Lakers into the No. 7 spot. “I don’t know anything else if you’re looking for an MVP. If Steph is not on Golden State’s team, what are we looking at?

And now the fate of the Lakers’ postseason seeding will come down to Curry, the league’s leading scorer, and the No. 8 Warriors coming to Staples Center on Wednesday (10 p.m. ET, ESPN), with a first-round berth against the No. 2 Phoenix Suns on the line.

The loser will go on to face the winner of the No. 9 Memphis Grizzlies and No. 10 San Antonio Spurs‘ play-in game, with the winner of that contest earning the No. 8 seed and a first-round date with the No. 1 Utah Jazz.

While L.A. finished the regular season on a five-game winning streak — with James averaging 24.5 points on 50% shooting, 7 assists, 4 rebounds and 1.5 steals in his past two games, after missing 26 of the Lakers’ previous 28 games with a high right ankle sprain — James’ teams had never entered the playoffs seeded lower than No. 4 in his previous 14 appearances.

“I don’t look at our seeding. It doesn’t matter. Obviously, we know we wanted to play a lot better this season, but the injuries took a toll on our team,” James said, alluding to his ankle woes and Anthony Davis‘ nine-week absence because of a calf strain and Achilles tendinosis in his right leg. “But I look forward to the challenge. It’s another challenge for me in the postseason. I’m looking forward to it.”

If L.A. is to repeat as champions — earning James his fifth ring and the franchise its 18th to pass the Boston Celtics for the most all time — it will have to pull off something unprecedented. The 1995 Houston Rockets were the lowest-seeded team in league history to win it all, entering the postseason in the No. 6 spot.

“It will be the hardest challenge any team has ever had in NBA history,” Lakers reserve Jared Dudley said when asked about the path ahead. “We’re up for it. We’re the defending champs. They’ve got to worry about us. We’re getting healthy at the right time, and no one wants to see a healthy Laker team.”

Dudley, when asked, questioned the strategy of the LA Clippers, who could have faced the Lakers in a first-round series if the Clippers finished No. 3 and the Lakers ended up No. 6; but the Clippers avoided that scenario by resting their stars and dropping their final two games to cellar dwellers in Houston and Oklahoma City to end up as the No. 4 seed.

“If I was another team, I would want to play us early,” Dudley said. “I would want to play when LeBron James is coming off of an ankle injury. We’re trying to find our chemistry. You think that we’re going to be better later or better now? I mean, the more chemistry and the more games, the stronger we get.”

Indeed, the Lakers appeared mighty ripe for a potential early playoff exit when James stepped on the foot of the Pelicans’ Nickeil Alexander-Walker in the fourth quarter on Sunday and tweaked his ankle.

Lakers coach Frank Vogel said James would have “no issues” from the tweak. “I’ll be fine,” James added.

Davis, who sat out a game earlier in the week with tightness in his groin and was a game-time decision on Sunday because of shoulder discomfort, also sounded optimistic about his health and that of the team.

“We feel good,” Davis said. “We feel confident about our team.”

That wasn’t the case just 14 days ago, when L.A. was beaten by an undermanned Toronto Raptors team to lose for the sixth time in seven games.

“Coach told us after that game, he said, ‘Stay together. Just imagine where we’ll be in two weeks,'” Davis said. “And it’s been two weeks to the day. So, we’re a much better team. We’re a much healthier team, which is most important. We’re finding our rhythm on both ends of the floor.”

Vogel said he never felt like things were “unraveling,” even with the late-season swoon.

“The message was: ‘Remain together; let’s not anybody overreact,'” Vogel said. “No one’s happy that we’ve lost these games, but we’re going to be OK if we stay the course, keep grinding, keep having a growth mindset each day.”

In a few days, the Lakers will get their first test in a postseason that will require 17 wins to reach the Larry O’Brien Trophy — one more than any previous champion has ever had to earn.

“We won’t call this [season] successful until we raise a banner, but we’re in position to do something special no matter what seed we’re in,” Davis said. “It’s only successful if we’re going to win it all.”