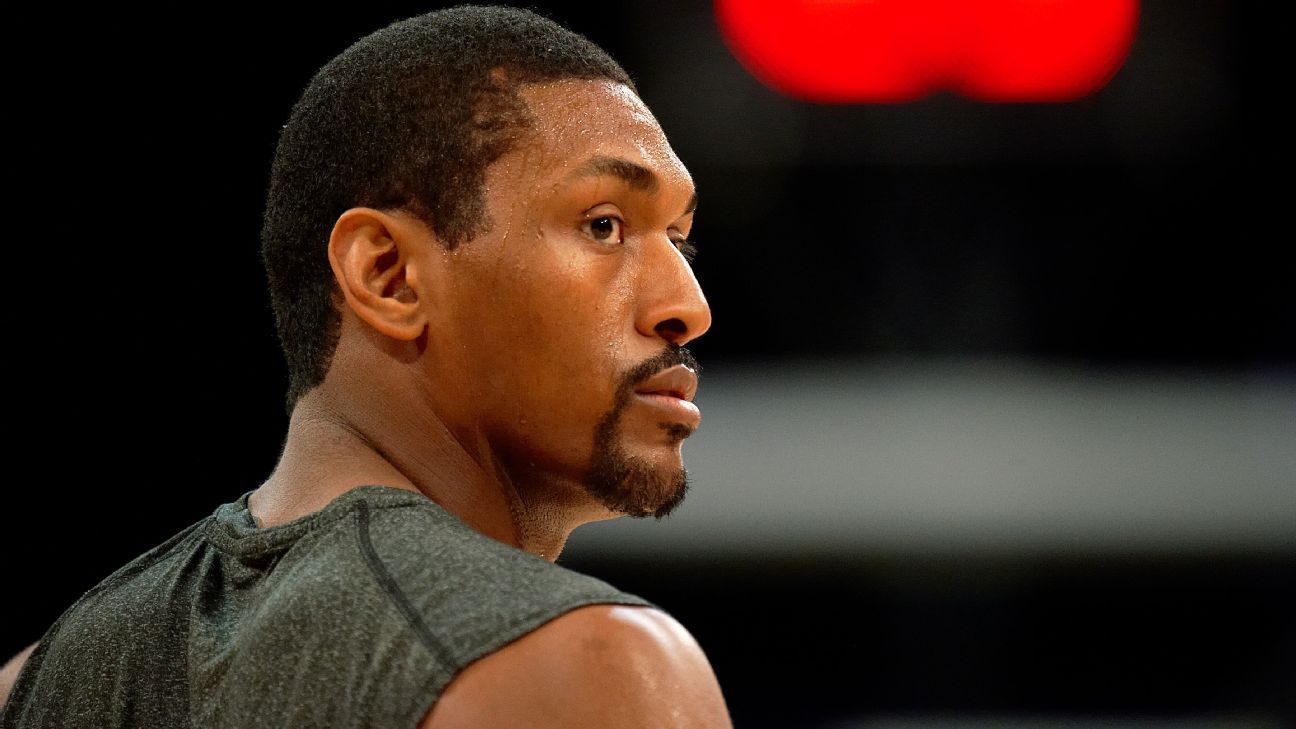 On November 19, 2004, Indiana Pacers forward Metta World Peace (then named Ron Artest) laid on the scorer’s table at the Palace of Auburn Hills, former home of the Detroit Pistons, where a confrontation was afoot. With 45 seconds left and the game in hand for the Pacers, World Peace had committed a hard foul on Pistons strong man Ben Wallace, who reacted by pushing World Peace and sending him to that aforementioned spot to cool down.

Then, it happened — a blue cup thrown by Pistons fan John Green pegged World Peace, who charged into the stands and set off a vicious melee between players and fans. It was a fit of anger that’s now synonymous with World Peace’s career and perhaps the perception of his personal well-being. But World Peace avowed it was less indicative of his mental health than it was retaliatory.

“They always [go to] that scene…me running into the stands,” World Peace recalled to ESPN. “[But] the Palace happened because somebody from the stands hit me, which changes the narrative.”

The true narrative was more nuanced. World Peace, who retired in 2017 after 17 years in the NBA, already had been in therapy for some time, attempting to channel the intensity that made him the NBA’s premier defender. But still, the consequences from that night sent him into a depression, part of a longtime struggle with personal peace.

Six years later, as he celebrated the 2010 championship with the Los Angeles Lakers, World Peace thanked his psychologist. About 11 years after that, earlier this month as part of Disney’s company-wide conversation about mental health, World Peace spoke with ESPN ahead of Mental Health Action Day.

This interview has been edited and condensed for clarity.

On growing up in New York City’s Queensbridge housing project, where he experienced trauma that left an indelible mark:

Different things happen in the streets that you’d be traumatized from. Things happening in the household; a brother goes away for 10 years; drug trafficking. I’m very familiar with the gun game. It just is a pile on. You got babies as a [teenager], [like] myself. All that stuff starts to add up. It’s always a conflict of interests. You’re in a professional world, but you’re not professional. I was conflicted being in a corporate environment. It was something that I wasn’t comfortable with at that age. I would drive back 13 hours on the weekend — go right back to my ‘hood and just relax for a little bit — and drive back to Chicago [where he was drafted by the Bulls in 1999] every time we had a day off.

On looking up to Dennis Rodman, whom he recognized as struggling with mental health before many others did:

Dennis Rodman was the first one to come out [and publicly say he was managing his mental health] — he was on Oprah [in 1996] — he talked about his family. When I saw that, I’m like, “Oh, wow. I didn’t know that about Dennis Rodman.” I just grew attached to Dennis. Like, “Oh, I feel you, I understand what you’re going through.” But people didn’t see it like that. Nobody wrote stories on, “Hey, Dennis Rodman was going through something.” His parents weren’t there, and he was homeless. That’s why I changed my number to 91 [Rodman’s number].

On prescient comments from one of his two college head coaches at St. John’s, where he arrived as a McDonald’s All-American from Manhattan’s LaSalle Academy:

I played extremely hard but, sometimes, it can go over the top, and I’ve been like that since high school, probably middle school. If you have any anxiety then that’s not a good mix, right? I know my old coach, Fran Fraschilla [the current ESPN college basketball analyst who coached him as a freshman], told me my intensity was a gift and a curse, but I never really understood it until later. Coach Fran, he was right. Sometimes, you can hold on to things that you should try to figure out ways to let it go. I made it to my goal, which was the NBA. At this point, I should really cherish that moment and try to release some of the old pressures. But when you’re going through it, you don’t really realize it. Basketball was amazing for me. I was trying to figure out a way to love it. I shouldn’t be unhappy on the court.

On being drafted 16th overall in 1999 and joining the scuffling Bulls, who had won 13 games the previous season — the first after Michael Jordan retired. (He made his debut at 19 years old. Chicago would win just 32 more in his two full seasons with the team.):

The Bulls, when I got there, I got in a couple of fights. And I was just on edge, like I always am. It would carry on off the court. I was so intense. I couldn’t even see it. It’s a beauty to watch, because you got a guy working hard every day, but then you also understand this guy is going through a lot. Then losing games — I hate losing. I’m not used to losing. I [had never really lost], and then you get to the NBA, you’re losing. So that really bothered me, and I didn’t understand that, “Hey, you’re a rookie, and [there are] pros here, and you’re going to get your butt kicked every day until you get a better team.” I thought I was supposed to win. It didn’t work like that.

On receiving mental-health support early in his career from his employers:

The Bulls … they were really good, actually. The Bulls were ahead of their time, but I didn’t really accept their help. I just thought it was a general diagnosis vs. customized. But that’s back then. When I got to Indiana, we started to really get a [mental-health] diagnosis, and then I just started to do therapy and breathe in and meditation and different things like that. That was really cool, when I started to work on that type of stuff. We got way more holistic. Just going through childhood stuff, talking about it. I think that was way more useful than just [prescribing medicine]. Some people try to do that, and I don’t think that’s the right approach. You got to diagnose somebody the right way.

On mental-health support from his teammates:

It’s hard for a [teammate] … if you don’t really have the experience yourself, but I had a lot of players come up to me [throughout my career] to make sure I was [doing alright]. So, you want to just be there to support and encourage but, at the same time, maybe, “Why would you lash out in practice?” It’s that balance between giving that encouragement, then also asking, “Hey, what’s wrong? You need to come down. This is basketball. Maybe you should go see a therapist.”

On the fallout from “The Malice at the Palace,” (which suspended him for the final 72 games of the 2004-05 regular season — the longest in NBA history for an on-court incident — and the subsequent playoffs. After playing 16 games at the start of the 2005-06 season, World Peace told the Indianapolis Star that the Pacers were better off without him and he wanted out.):

I wanted to play, man, but I couldn’t play at all [during the suspension]. I was hoping that I could just take the fine, take all the money and just let me play. They did both. I worked out from November until the playoffs. And then beyond the playoffs, in the summertime, I started to get depressed. And then the season’s coming back, then I started to panic a little bit when that season came back. So, then that’s when I requested the trade. I was like, I just need to get out of here. Then, I really went into depression. I went from 248 to 273 [pounds] when I got to Sacramento [where I was traded]. When I went back after the suspension, I was more worried about what was going to happen in the arena. You’re worried about if somebody is going to test you. Somebody [could] throw something at you. I was just super-panicked, but I had a support system. I still had my therapist.

On how to cope, especially as someone who had success on the court — he was an All-Star, Defensive Player of the Year and All-NBA selection — despite mental-health struggles:

Balance is key. Let’s just say you’re playing extremely well, but you’re not emotionally there. To find balance, you got to go in the opposite direction sometimes, which will pull you from your greatness. But for me, I had to take a couple of steps back from giving my all to the game. I had to give a little bit to me personally. It was unfortunate because I was in the prime of my career but, in the end, I felt better. It took a long time. Though, I would say about the age of 28, 29 was where I started really being able to understand what was going on.

On thanking his psychologist, Dr. Santhi Periasamy, while talking to ESPN NBA analyst Doris Burke as confetti fell at Staples Center, where the Lakers defeated the Celtics in Game 7 of the 2010 Finals:

A lot of therapists actually reached out. I know players that were going through stuff also, different issues than what I was going through. A lot of therapists hit me back [saying], “Thank you, you made my job easier just by coming out like that.” I know we had [Kevin] Love and [DeMar] DeRozan who came out [and talked about their mental health]. I thought it was really good because I didn’t realize they were actually going through a few things. And I thought that was big.

On the importance of mental-health infrastructures for kids and young players:

Look at the new leagues coming up. They’re not necessarily starting with mental health, they’re starting with the business of basketball. But the NBA, they got a [financial] cushion and they got the resources to add that. There are a ton of case studies that show that they should have that. It doesn’t cost much every year to have a program. And I think they’re doing a good job. I’m 41. I’m just talking to youth about [mental health]. I actually try to coach kids that kind of grew up similar, give them some different options.