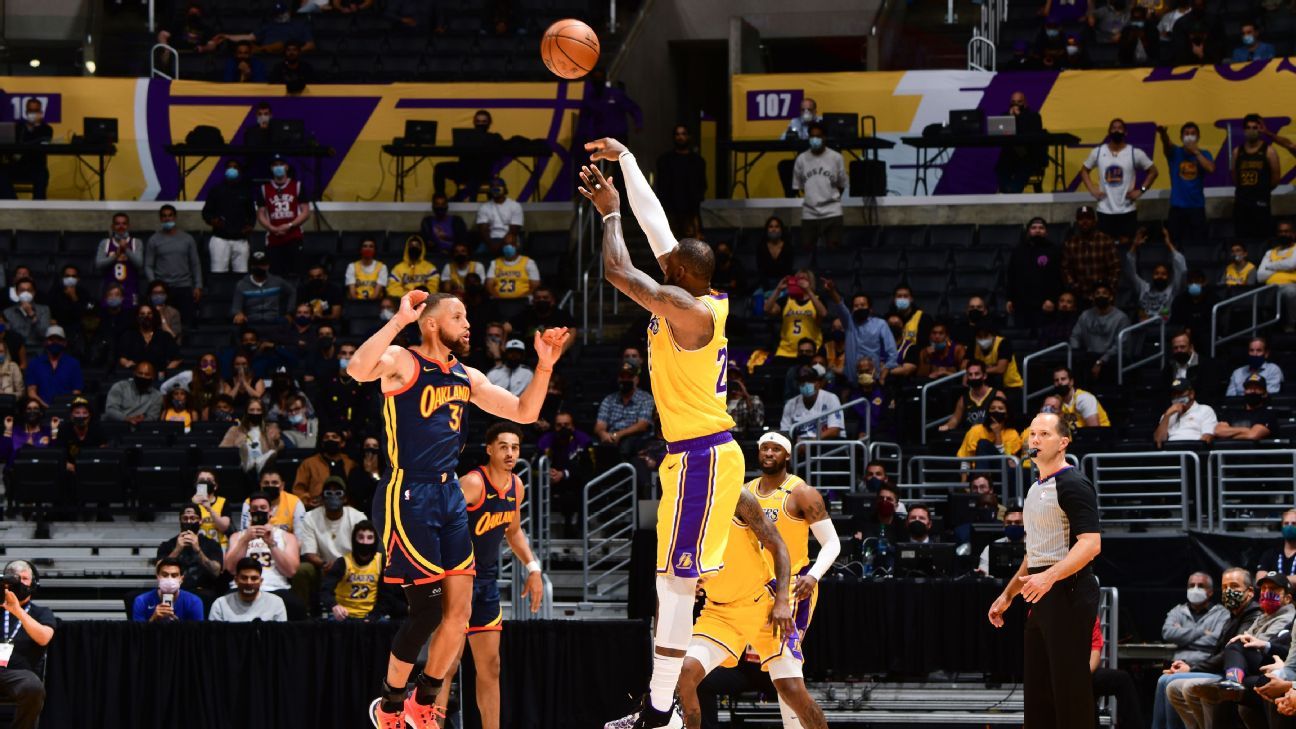 LOS ANGELES — By all accounts, the play-in tournament has been a resounding success for the NBA this year. It created exciting new scenarios toward the end of the regular season and mostly stemmed the widespread tanking which had made a mockery of the final month of play for the 14 teams who weren’t making the playoffs.

And it gave us a delicious matchup between the Los Angeles Lakers and Golden State Warriors Wednesday night at Staples Center.

The game was an instant classic, with two of the league’s brightest stars, Stephen Curry and LeBron James matching each other with brilliant performances and clutch shot-making that felt more like one of their classic NBA Finals matchups than the play-in game to get to the actual playoffs.

James got the better of Curry on Wednesday, hitting a 34-foot 3-pointer over him to seal the Lakers’ 103-100 win. The triple was the longest go-ahead shot in the final three minutes of a game in James’ career, according to ESPN Stats & Information.

He finished with 22 points, 11 rebounds and 10 assists for his 128th career triple-double (including regular season, play-in and playoffs).

“It was good to get that first punch,” James said. “Mike Tyson always said, ‘Everybody got a plan until you get in the ring and you get punched.’

“We did that and it felt good. It felt great. It settled us. It wasn’t comfortable, but it settled us and we were able to bring the fight to them. We are looking forward to what is going to be in store for the postseason.”

The Lakers’ win gives them the seventh seed in the Western Conference and a first-round playoff matchup against the Phoenix Suns, but drops the Warriors, now fighting for the eighth seed, into an elimination game Friday against the Memphis Grizzlies (9 p.m. ET on ESPN).

It’s fair to question if the reward for all that excitement is worth the risk of potentially losing one of the league’s marquee franchises before the playoffs officially begin.

“This is a bitter pill to swallow,” Kerr said after the game. “This was our game and we couldn’t get it done.”

The Warriors now have less than 48 hours to regroup before facing the Grizzlies in San Francisco. It is a bit redundant from the Warriors’ May 15 regular-season finale win over Memphis, which determined the eighth seed in the play-in tournament.

In any other year, that win would have sent the Warriors into a first-round series against the top-seeded Utah Jazz. But this year, they’ll have to play two extra games, one of which is an elimination game, just to advance to the same series.

The original proposal for a play-in tournament, according to league sources, was to have the ninth and 10th place teams face off for a chance to play for the eighth seed. It came up in competition committees for five or six years, before finding a perfect opportunity for a trial run last season in the NBA Bubble. That worked so well, the league opted to expand it to the current format, which also involves a play-in for the seventh seed.

All season long, teams and stars who fell to the seventh spot in the standings lamented the new format, which could effectively take what had been a guaranteed playoff spot and turn it into a vulnerable position.

Was there self-interest behind those gripes? Sure. But there was also the stark realization that this could exact a heavy toll on a team like the Lakers, who were devastated by injuries to star players in the second half of the season. Or a team like the Warriors, who won 15 of their final 20 games to snag what would have been a guaranteed playoff spot in previous seasons.

“You guys asked me a few days ago how I felt, I said I’m ready to go”,’ James said about the play-in format. “May the chips lay where they may. I showed up and we showed up. And we were ready to play.”

In the first half, LA looked like a team that could’ve used the week of practice, shooting just 32.6% and missed 31 shots — both season lows. The trio of James, Anthony Davis and Dennis Schroder scored just 13 points. Curry alone had 15 points, including a contested 3-pointer over Alex Caruso to end the half with the Warriors leading 55-42.

The Warriors defense deserves some of the credit for the Lakers’ first-half struggles, too. Golden State quietly became a good defensive team by the end of the season behind former Defensive Player of the Year, Draymond Green, and Andrew Wiggins, the former No. 1 overall pick who has been a bright spot for Golden State after his underwhelming start in Minnesota.

According to ESPN Stats & Information, the Lakers went a combined 2-for-18 when defended by Green (2-for-9) or Wiggins (0-for-9) in the first half.

The Lakers roared back in the third quarter, finally giving up on playing Andre Drummond at center. With the Warriors zipping the ball around, creating energy and space for their shooters, LA almost had no choice but to switch Davis to center, a position he does not prefer.

But Davis wasn’t having much success as a power forward in the first half, shooting just 2-for-12 from the field, so there wasn’t much reason to stick with alignment.

The switch bore immediate results. The Lakers went on a 25-10 run, hitting 11-of-15 shots after Drummond was taken out of the game with 5:16 to go in the third quarter. The Lakers were +6 in the 21 minutes Davis played at center Wednesday.

“The message at halftime was we have to play more physical, that’s the public way to put it,” Vogel said. “The rotational tweak was, a play-in game, an unprecedented situation for us. In a playoff series series you have to make your adjustments from Game 1 to Game 2 or Game 5 to Game 6. We knew coming into this that adjustments were gonna have to be made in-game.

“We looked at our big lineups, in the first half, that was the plan. To evaluate at halftime, whether to run it back or to adjust and play small … AD struggled to get going with the big lineup, with Draymond out there muscling him and not calling anything. So a combination of what I knew Wes [Matthews] would bring to our toughness and open things up for AD and start playing him at the 5.”

Of course, the Lakers’ run also overlapped with the 1:37 Curry was out of the game at the beginning of the fourth quarter. Kerr generally likes to get Curry more rest than that, but the Lakers scored six straight points with Curry out to take their first lead of the game, 81-79, on Kyle Kuzma’s hook shot off a pass from James with 11:05 to go in the game.

It was only the second time Curry has played within the first two minutes of the fourth quarter all season.

But this was a playoff-level atmosphere (an estimated 6,000 fans), with playoff-level stakes, even if it is not officially the playoffs yet. So Curry had to play.

“The guy is just flat-out unbelievable,” Lakers coach Frank Vogel said. “Steve Kerr said we were going to throw the kitchen sink at him and we did — and he still had 37.”

According to Second Spectrum, the Lakers blitzed Curry on 15 pick plays on Wednesday, 13 of which came in the second half. That’s the second-most times LA has blitzed a single player in a game this season.

Curry has handled defenses like this all season. But the game tightened. In the fourth quarter, the teams traded leads three times, with James scoring eight of his 22 points, Davis finally finding his stroke (13 of his 25 points) and Curry scoring 11 of his game-high 37 points.

James stayed in the game after getting poked in the eye by Green and landing awkwardly on his left leg with 2:07 remaining in the game. He hit one of the two free throws, tying the score at 98.

But it was the off-balance 3-pointer he hit in front of Curry with 58 seconds to go — James’ longest make of the season — that sealed the game for the Lakers.

“After Draymond’s finger to the eye, I was literally seeing three rims out there,” James told ESPN’s Rachel Nichols after the game. “I just shot for the middle one.” It was the kind of deep, 3-point shot that Curry has hit over hapless defenders so many times over the years. And Curry bore the same reaction to James’ dagger he normally leaves on others.

Green — who did not make a field goal in the game but had nine rebounds, eight assists, three steals and three blocks — passed it on to Jordan Poole, who missed a 3-pointer with 35 seconds remaining.

“Walked in the locker room and guys were upset, frustrated, angry we didn’t get the job done,” Curry said. “But we’ll be ready on Friday … biggest game of the year.”