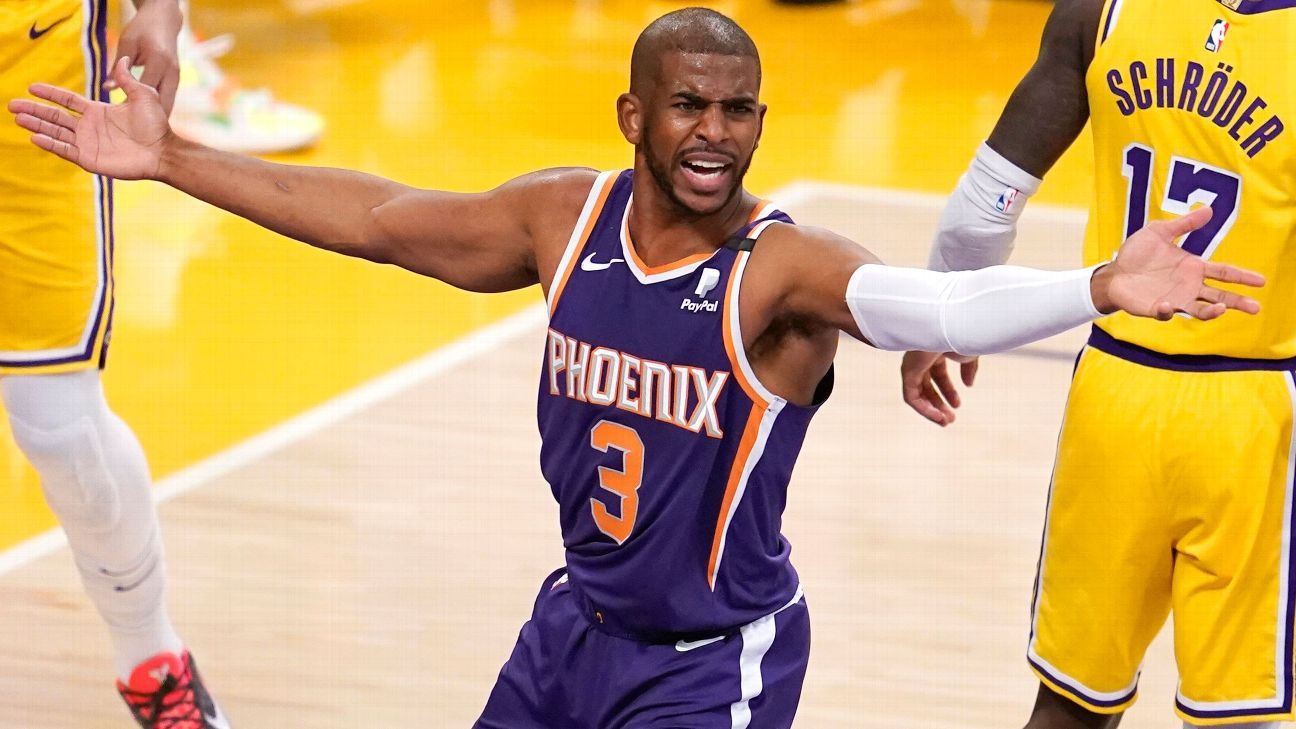 There’s a look Paul gets when he’s locked in — something between completely-in-control and about-to-jump-into-any-fray — and then there’s the look he had on his face throughout this first-round playoff series against the Los Angeles Lakers while playing through yet another ill-timed, painful injury.

“I’ll watch his face to see if I see the same look I typically see from him on a night in, night out basis,” Williams said before the Suns’ 109-95 loss to the Lakers Thursday night to drop them into a 2-1 hole in the series. “I’m not going to put him in harm’s way.”

No matter how much Paul pleads his case by citing Kobe Bryant quotes and videos.

No matter how hard it would be for the 36-year-old to see what had seemed like a golden, late-career opportunity to win a championship slip away.

The defending champion Lakers were always going to be a betting favorite against the second-seeded Suns, despite their seventh seed and myriad questions about their health, chemistry and consistency.

But the story of this series thus far has been Paul’s injury, not the Lakers regaining their championship form.

“It is what it is, you control what you can control,” Paul said. “I know I do everything on a daily basis to prepare myself to be ready to play. When things happen, they happen. You gotta overcome it and get through it.”

Time is running out for Paul and the Suns to heal and regain the swagger they brought with them into the playoffs. But this is a bad movie Paul has lived too many times throughout his Hall of Fame career.

In the 2018 Western Conference Finals, Paul pulled his hamstring just as the Houston Rockets had the Golden State Warriors on the ropes. That was after a hamstring injury derailed Paul and the Los Angeles Clippers in 2015, and a hand fracture in 2016, then a foot fracture to his Clippers co-star, Blake Griffin in 2017.

So many injuries, each so cruelly-timed.

“I’m probably not the guy to talk to about cruel stuff, I know what cruel is, so it’s just basketball,” Williams said, alluding to a car accident that killed his former wife, Ingrid, in 2016. “I know how bad he wants to win, but at the end of the day, when we get paid to do what we do, you got a beautiful wife and children with a Hall of Fame career.

“He’s handled these things well, and I don’t doubt that Chris will come through this stronger and better. But what we’re going through now is not the worst thing in the world. Now, as it relates to his career and legacy, it is hard, and I get that. To be where he is and how he’s played for us, and not be able to play at the highest level, that’s hard. But Chris is mentally strong, he’ll be able to handle it and help us the right way.”

Paul looked better in the first half of Thursday’s game than he did at any point in Tuesday’s Game 2 loss. He was able to shoot a few of his signature mid-range jumpers and battle for rebounds and loose balls.

But in the second half, he was a shell of himself — going scoreless in just over eight minutes. He seemed to hurt himself after running into Cameron Payne following a missed free throw by LeBron James with 10:26 remaining.

Paul bent at the waist, clearly in pain after being kneed in the groin, but stayed in the game for another minute before Williams pulled him out for good with 9:34 to go in the game and the Suns trailing by double digits.

The Suns have put up a good fight as their leader and MVP candidate has been hampered by injury the past two and a half games. But this is not what the team that had the second-best record in the league hoped their first playoff appearance in 11 years would be.

“I kind of feel like our poise kind of wavered a little bit tonight, and we gotta get back to the meat and potatoes of our team,” said Payne, who had 15 points, six assists and four steals. “I feel like we just got to be more aggressive and play Phoenix Suns basketball for a whole 48 minutes.”

Game 3 was an ugly, defensive grind for both teams. According to ESPN Stats & Information, the Suns and Lakers’ 83 combined points in the first half is the fewest for any two teams in any half this season. The second half wasn’t much better, if you’ve grown accustomed to the kind of exuberant offense that took hold in the NBA this season.

But the Lakers at least found a superstar to carry them as Anthony Davis finished with a game-high 34 points on 11-of-22 shooting and 11 rebounds, despite playing with a hyperextended left knee.

The Lakers made a point of getting the ball inside to Davis and attacking the rim as often as possible Thursday. According to Second Spectrum, 16 of Davis’ touches started in the paint — the second-most in a game since he joined the Lakers two seasons ago — and led to 24 points for the Lakers.

Thursday night was the first Lakers home playoff game since 2013, as they won the title last season inside the NBA Bubble at Disney’s Wide World of Sports Complex in Lake Buena Vista, Florida.

“Staples Center was exactly what it needed to be,” Davis said. “Once it gets full capacity it’ll be even louder, but that’s how we want it. We fed off the crowd tonight. The crowd was loud and gave us some extra energy to make shots and some big plays defensively and ultimately win the game.”

James finished with 21 points, nine assists and six rebounds as he continues to work his way back from a high-ankle sprain that cost him 27 games.