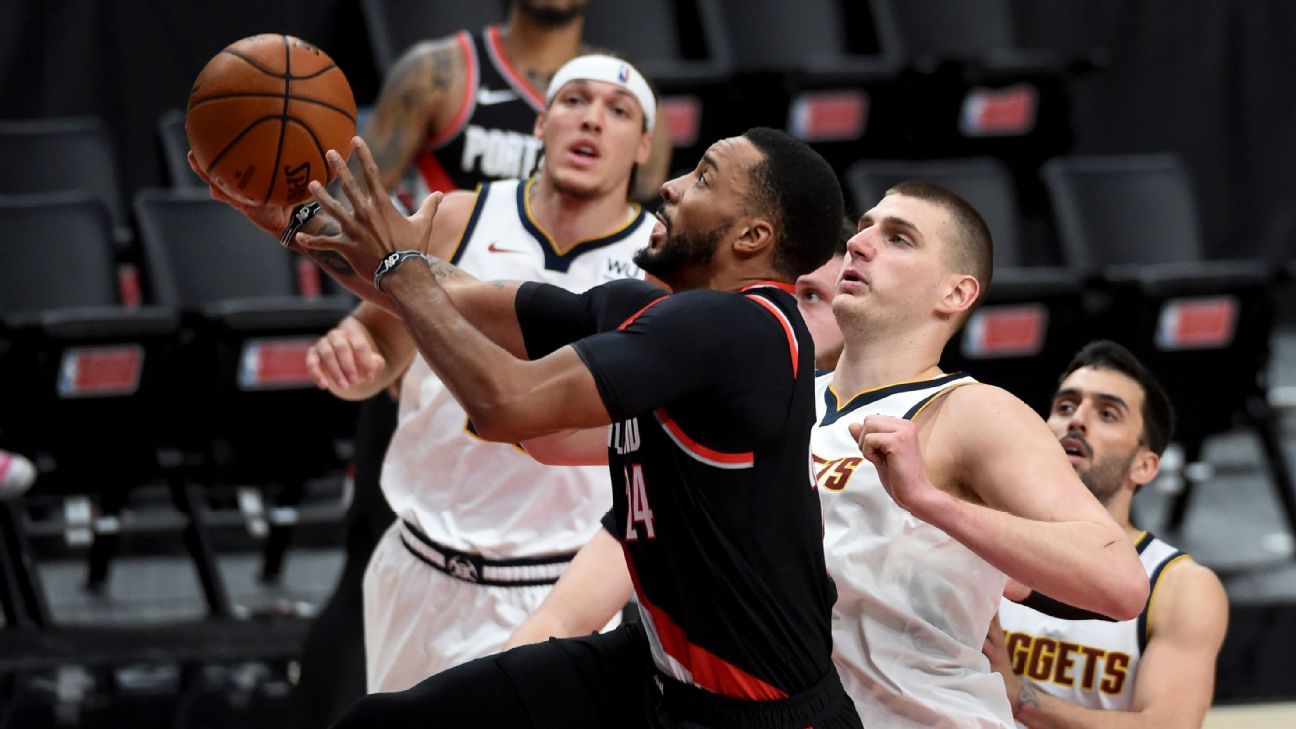 It’s not unusual for Denver Nuggets coach Michael Malone to tell it like it is and he put it quite bluntly again after a 115-95 loss in Game 4 to the Portland Trail Blazers.

“Our starters were awful,” he said. “I thought we had some guys that were tentative, that looked a little scared, who played soft… we’re going to have to be a lot better going home.”

The Nuggets fell behind early in Game 4, a developing trend in the series that they overcame in Game 3. But with the Blazers bottling up Denver’s offense, along with newfound balanced scoring, the margin widened in the third quarter, eventually turning into a full-fledged blowout as Portland evened the series, 2-2.

“The urgency has to be there. Maybe this will be a wake-up call for our starting group just to play harder,” Malone said. “Good things happen when we play hard and we didn’t play anywhere close to hard enough tonight.”

The Nuggets starters were outscored 49-26 in Game 4, shot just 30% from the field and allowed Portland to shoot 65% when they were on the floor.

“Their starters beat us by a lot and we didn’t respond well,” Nikola Jokic said. “We need to be much better.”

What’s shocking about the loss — and the final score — is it came in spite of Damian Lillard making just one shot in 31 minutes. Lillard finished 1-10 from the floor, his lone bucket coming on a step-back 3 in the first half. He did make an impact in other ways, dishing out 10 assists to go along with 8 rebounds.

It was a collection of Blazers that made up for Lillard’s lack of scoring, with Norman Powell tying a playoff career-high with 29 points on 11-15 shooting, CJ McCollum scoring 21 and Jusuf Nurkic adding 17.

“If you would’ve told me going in that Damian Lillard was going to be 1-10 from the field and we’re going to get blown out, I probably would’ve had a hard time believing that,” Malone said.

The attention Lillard draws is enormous, with the Nuggets sending multiple defenders and schemes at him at all times. An adjustment in Game 2 to put the bigger Aaron Gordon on Lillard was a game-changer in that game, but he has since responded with 37 points in Game 3. But as Denver dedicated its defense to making it difficult for Lillard, he stayed committed to making extra passes and moving the ball, especially with the way his teammates were playing.

“When the game is going like that, I just try to manage the game and make sure it goes right,” he said. “Obviously I’m going to still try to find my spots and not get too passive, and I didn’t shoot the ball well, but once I saw guys had it going and we had a good flow to the game and we were defending, I knew I wasn’t going to have to force my way into it.

“If it came down to it I knew I’d put my head down a little bit more and start to search a little more, but when guys step up and are feeling good and making shots, and we’re winning the game with what we’re doing, my job is to understand that and manage it and ride that out.”

With the Blazers up 20 or more for basically the entire second half, there was no call for Dame Time — Lillard spent most of the fourth on the bench.

“I didn’t have to come out and try to score 50 points or just dominate the game and have a hero performance or nothing like that. It was just like, our team needed to have a really good game,” he said. “We defended on a string, our communication was on point, our execution of the scouting report was on point and on the offensive end the ball was just hopping around.”

The Blazers made some rotational adjustments, going small in their second unit with Rondae Hollis-Jefferson taking Enes Kanter‘s minutes, along with tweaking their pick-and-roll coverage to try and stay tighter to Denver’s ball-handlers.

Their approach throughout the series, though, has been to go with largely single coverage on Jokic, forcing the presumptive MVP to turn into a scorer rather than a typical full offensive buffet of scoring and passing. Nurkic matched minutes with Jokic, and after fouling out in the previous two games, stayed out of foul trouble in Game 4.

After logging just one assist for the second time in four games, Jokic has just 12 total for the series, tied for his fewest in any four-game span (regular-season or playoffs) in the last three seasons.

According to Second Spectrum, Jokic had only two potential assists in Game 4 (shots that would’ve been credited with an assist if it went in), the fewest potential assists in a game over the last four seasons. Nurkic’s presence was a big part of it as he held the Nuggets to 5-17 shooting as the primary defender in Game 4.

With the series back to even, it transitions to a best of three with Game 5 in Denver on Tuesday.

“If the effort and energy isn’t going to be now, when is it going to be?” Jokic said. “I think that every player needs to take that on himself and that cannot even be a question.”