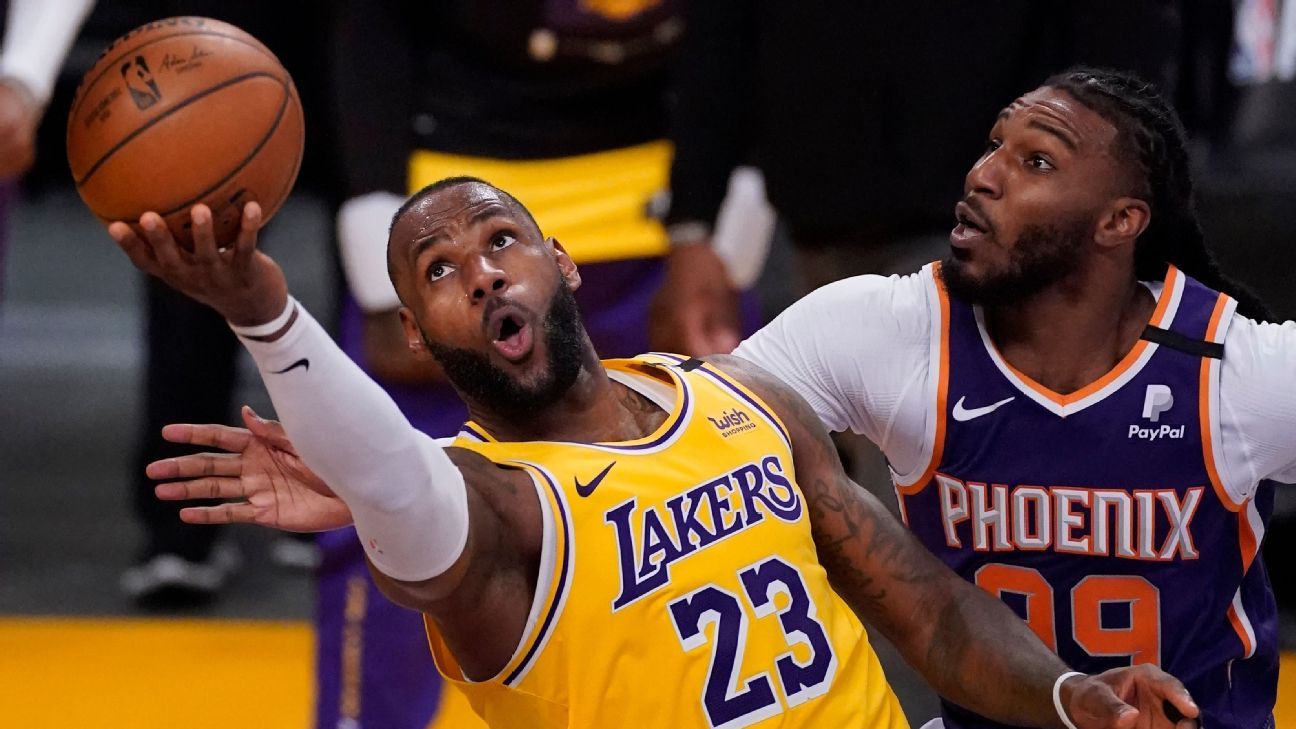 The Milwaukee Bucks have taken care of business, blitzing past the Miami Heat in four games. The Philadelphia 76ers, Brooklyn Nets and Atlanta Hawks are each one win away from joining them in the Eastern Conference semifinals.

What happens next in the Western Conference playoffs, though, is anyone’s guess.

Outside of the Utah Jazz vs. Memphis Grizzlies series, which the Jazz lead 3-1, the three remaining matchups — Phoenix Suns vs. Los Angeles Lakers, LA Clippers vs. Dallas Mavericks and Denver Nuggets vs. Portland Trail Blazers — are tied, with critical Game 5s ahead.

Which factors will decide the series that are locked at 2-2? How many matchups are going seven games? Can the New York Knicks send their series back to the ATL?

Our experts discuss what lies ahead in the first round.

1. Aside from Anthony Davis‘ health, what will most determine the winner of Suns-Lakers?

Tim Bontemps: The combination of Chris Paul‘s health and Deandre Ayton‘s play. I thought this was a toss-up series to begin with, and Paul’s shoulder issue swung the pendulum in L.A.’s favor in Games 2 and 3, while Anthony Davis’ groin injury helped swing it back to Phoenix in Game 4. Davis’ health will loom over the rest of the series, but if Paul continues to play like he did in Game 4 and Ayton remains an impactful player, the Suns should be favored to close this series out. Even if Davis plays, it’s hard to envision him back at 100 percent.

Andrew Lopez: Chris Paul’s right shoulder. It has been bothering him ever since the second quarter in Game 1 when he first injured it. Paul fought through the rest of that victory, but it was clearly hampering him in the following two games. After Game 4’s win, Paul told ESPN’s Rachel Nichols that Suns coach Monty Williams was going to hold him out of Sunday’s game but he protested — and went on to score a team-high 18 points with nine assists and no turnovers.

Brian Windhorst: Whether the Lakers can score. These guys are elite defenders, almost no matter the adversity they face. But, man, is it vital, because their offense just isn’t there many days. They rely heavily on greatness from their superstars and the occasional hot 3-point streak. (In last season’s bubble, they had tremendous outside shooting, and it eased the burden on LeBron James.) With Anthony Davis and Kentavious Caldwell-Pope banged up, it’s a big lift. But they’ve had a lot of open looks in this series that they’ve missed, so the defending champs just need some better execution.

Royce Young: Paul’s right shoulder. Paul looked much more like himself in Game 4, even declaring, “I’m back,” after hitting his patented midrange leaner. But his control of the offense is critical to Phoenix’s execution, particularly late in games. Devin Booker is sensational, but Paul’s stability in crunch time — he was sixth in the league this season in clutch points — could be what decides the series.

2. What will most determine the winner of Clippers-Mavs?

Bontemps: The Clippers’ defense. Can they keep up their intensity from Game 4 throughout the rest of the series? Yes, the Mavericks were unsustainably hot from 3-point range in the first three games of this series. But the Clippers also played with a different level of energy in Game 4, led by Nicolas Batum getting four steals and two blocks while finishing a plus-27 in 36 minutes.

Lopez: The health of Luca Doncic. He acknowledged the nerve pain he was feeling in his neck, and Mavericks coach Rick Carlisle told reporters, “It appeared to me that he couldn’t turn left, couldn’t look to his left.” Aside from that, how the Mavericks continue to adjust to the Clippers’ new starting lineup with Nicolas Batum instead of Ivica Zubac also will be key here.

Shelburne: The Clippers deserve a ton of credit for how they played in Dallas after dropping the first two games at home. But Luka Doncic was the best player on the court until he hurt his neck in Game 3, and that’s saying a lot, considering how good Kawhi Leonard has been. I’d like to see this series with everyone at close to full strength, because it is a fascinating matchup. But if Doncic isn’t healthy, it’s hard to see how the Mavericks win now that the Clips are rolling.

Windhorst: Can Doncic pass? His neck injury has affected the series but especially his passing. The Mavericks crushed the Clippers’ defense in the first two games, shooting an outrageous 35-for-70 on 3-pointers. But with limited mobility in his arm and neck, Doncic just hasn’t been as effective setting up the offense. The Clippers are pushing hard now, and the Mavs need a full-powered Doncic.

Young: The health of Doncic. He quite clearly didn’t look right in Game 4, and the trickle-down effect has massive implications in a number of areas for the Mavs. Doncic puts so much pressure on a defense; so, if the Clippers don’t have to be as concerned with him, they can put locks on the role players who were so good in Games 1 and 2.

3. What will most determine the winner of Nuggets-Blazers?

Bontemps: The play of Michael Porter Jr. Nikola Jokic‘s poor Game 4 was clearly an outlier, and he’ll all but certainly be great in Game 5. But the Nuggets simply have to get more from MPJ than they did in Game 4, when he scored only three points in 23 minutes. If Porter can’t provide a big offensive game alongside Jokic, this series might not make it back to Denver for a Game 7.

Compete for $30,000 throughout the NBA postseason! Make Your Picks

Shelburne: Norman Powell. He was awesome on both sides of the ball in Game 4, leading the Blazers with 29 points on 11-for-15 shooting and stout defense on the much taller Michael Porter Jr. Powell held MPJ to just three shots in Game 4. Three! Portland has never been known as a great defensive team, but if the Blazers can keep throwing different looks at Denver, they’ve got a shot at the upset.

Windhorst: The play of Michael Porter Jr. He played at an All-NBA level down the stretch of the season, elevating his output after Jamal Murray tore his ACL and becoming the type of weapon that the Nuggets believe will lead to a title someday. But the Blazers have challenged him, applying pressure to Nikola Jokic and his ability to create offense because they’re betting Porter won’t step up. Porter has shot just 41% in the past three games, and he took just three shots in Game 4. If this continues, Portland will probably win it.

Young: Whether Denver’s role players hold up. The Blazers have made a bet since Game 1 that the Nuggets’ role players won’t be able to consistently produce throughout the series. They’ve tried to make Jokic one-dimensional, turning him into a score-first center. Denver got an answer in the form of Austin Rivers in Game 3, but no one showed up in Game 4. Simply put: The Nuggets need two big games from Michael Porter Jr.

Stephen A. Smith sounds off on Julius Randle’s play throughout the Knicks’ first-round playoff series with the Hawks.

Bontemps: A good game from Julius Randle would be a start. To have any chance of extending this series to a sixth game, the Knicks will need more from the NBA’s 2021 Most Improved Player, who has shot 20-for-73 from the field — including an abysmal 13-for-49 on 2-point shots — through the first four games.

Lopez: Win the non-Trae Young minutes. In their regular-season sweep of Atlanta, the Knicks were plus-42 when Young sat and minus-16 when he was on the court. In Game 2, the Knicks were plus-14 when Young was on the bench and minus-5 otherwise. In Knicks losses in Games 1, 3 and 4, the Hawks won the battle when Young wasn’t out there, although it was even in Game 4 because of garbage time stats. (Atlanta was plus-9 before the benches emptied with 3:05 left.)

Shelburne: Reggie Bullock. He has been expending so much energy defending Trae Young, it’s hard for him to get much going offensively. Normally, that’s a trade the Knicks would make. But with Julius Randle struggling too, they need to reestablish Bullock as a 3-point threat to create space and make Young have to work defensively.

Windhorst: Make some shots. The Knicks are defending well enough to win, but their offense, mostly because Julius Randle is in the middle of a gruesome slump (27.4% shooting for the series), isn’t workable. The Hawks have improved defensively under Nate McMillan, but the Knicks’ shooting deficiencies are being aired for the world to see. Only the Heat, who were swept, have been worse offensively in the playoffs than New York.

Young: Make Trae Young work. The Knicks need more from Julius Randle and RJ Barrett, but they also have to figure out a way to slow down Atlanta’s explosive offense. That starts with wearing down Young, and not just with more traps and blitzing. They need to attack him on the defensive end, running him off screens and isolating on him. The Knicks must go after Young and take advantage of the mismatches.

5. How many first-round series will go seven games?

Bontemps: I’ll go out on a limb and say none. The East series still taking place should all end in Game 5. In the West, the teams that won Game 4 in the 2-2 series — the Suns, Blazers and Clippers — seem well-positioned (in Phoenix’s case due to the Davis injury; the others because of successful changes made in Game 4) to close out their respective series in six games. However, I’ll be the first to say that I hope I’m wrong. I’ll happily take a weekend full of Game 7s.

Lopez: Two. I’m not sure Knicks-Hawks makes it to seven now, so that might take care of the entire Eastern Conference. I could certainly see the three West series that are all tied at 2-2 going seven, but I’ll pick two of them to do so: Suns-Lakers and Blazers-Nuggets. The winner between Phoenix and Los Angeles will come down to health, but on the court, it’s been a good series. For Portland and Denver, the Nikola Jokic-Damian Lillard battle just feels like it should go the distance.

Shelburne: Two. Lakers-Suns, Mavericks-Clippers, Knicks-Hawks and Blazers-Nuggets all feel like the kind of series that can go seven games — because of injuries to stars or adjustments being made game to game by the respective coaching staffs. I’ll say two of the four actually go the distance.

Windhorst: Two. Lakers-Suns and Clippers-Mavs. Injuries are playing big roles in these series. Uncertainty and recovery will define them and likely continue to stretch them out.

Young: Three. The Clippers and Mavs look destined for seven, especially if Doncic improves physically. The Suns and Lakers are both excellent teams, and health factors are opening doors to extend it. And the Nuggets and Blazers seem contractually obligated to play seven games in the playoffs. Everything else should be wrapped up in five or six.

NBA trade rumors: Jae Crowder trade may be coming after unexplained delay
NBA Trade Rumors: Warriors could finally get their Gary Payton II replacement
NBA Trade Deadline Tracker: Live updates on every transaction
Stats prove the refs aren’t out to get the Lakers this year
3 players besides Kevin Durant and Kyrie Irving the Nets could trade to rebuild