In the 2021 NBA Finals, the Phoenix Suns (55-36-2 ATS) have lost three consecutive games to the Milwaukee Bucks (45-49 ATS). Up till Game 4, the Suns had not lost back-to-back games in the postseason. Now, the total has gone over in five of the Suns’ previous seven games. The total has also gone over in nine of Milwaukee’s past eleven games played against Western Conference opponents. Additionally, the Bucks are 57-26 as selected favorites and 4-7 as underdogs, whereas the Suns are 53-20 as favorites and 12-8 as underdogs. In Game 5, the Bucks won the first road game in the series for either team. Referencing StatMuse, the Bucks are 9-1 at home in the playoffs this season. The total was set at 220 in the fifth game of this series, and the total went over +22 (242).

Per Bovada and Odds Shark, oddsmakers are projecting the Bucks to win Game 5, for the team to cover the spread, and for the total to go over 222. At 63 percent, the spread consensus currently favors the Phoenix Suns. Leading into Tuesday night’s game, this could work in their favor, considering it is an elimination game for the road team. Moreover, the Suns have never won an NBA title. Their last finals series loss was back in the 1992-93 season. They lost the series four games to two versus Michael Jordan and the Chicago Bulls. To add to that fact, the Bucks have not won another championship since the 1971 NBA Finals. They swept the Washington Bullets to win their first title.

Two-time MVP Giannis Antetokounmpo closed out his Game 5 performance with 32 points, nine rebounds, and six assists. Per Basketball-Reference, the Greek Freak has scored a total of 584 points in the 2021 playoffs. He has a total of 40 playoff double-doubles in his NBA playing career. While he’s not yet in the top 20 all-time for postseason double-doubles, he is 29 shy from tying Dave Cowens (69).

In the post-game press conference, after being asked about his passion for the game and overall effort, Giannis said to the media, “I kind of try to focus on the moment, in the present. That’s humility, that’s being humble. That’s not setting no expectation. That’s going out there, enjoying the game, competing at a high level.” It should go without saying that his love and enthusiasm for the game has shown itself on numerous occasions in this particular series.

Sealed with a steal. Jrue was unreal.

Milwaukee’s Khris Middleton also had 29 points, seven rebounds, and five assists, based on a team-high of 44 minutes played in Game 5. Moreover, the Bucks shot 50-for-87 (57.5 percent) from the field, while the Suns shot 48-for-87 (55.2 percent) on their home court. Putting aside the field goal percentage comparison, if one skimmed through the Game 5 team statistics sheet, he or she would be under the impression that Phoenix won.

However, at 18.4 seconds remaining in the fourth quarter with a 120-119 Bucks’ lead, Jrue Holiday knocked the ball away from the Suns’ Devin Booker. Then, Antetokounmpo sealed the deal at the 13.5 seconds mark, completing an alley-oop dunk to bring the score to 122-119. This one costly turnover for Phoenix lost them the game.

As if yielding a two-game series lead in the NBA Finals was not enough to cause some Phoenix fans to boo their players, the Suns also blew a 16-point lead in the first half of Game 5’s loss. Not to mention, they squandered a six-point lead in the fourth quarter as well. Needless to say, the Suns are struggling to close out their finals performances with more energy, aggression, and consistency.

The Suns shot 10-for-11 (90.9 percent) at the free throw line, so they have to play better defensively. Giannis is running right through them. Furthermore, Devin Booker is carrying this team at the moment. He is averaging 30 points, 3.6 total rebounds, and 3.8 steals per finals game in this series. In the Suns’ 123-119 defeat in Game 5, Booker scored 40 points and Deandre Ayton ended his night with 10 rebounds.

.@DevinBook is tonight’s @FanDuel Stat Line of the Game. pic.twitter.com/HMUqagQT7S

In an average of 36 minutes played throughout the course of this series, Chris Paul is averaging 21 points, 2.8 total rebounds, and 8.8 assists. Thus far, Paul is certainly assisting other players to bring the ball to the basket, but he is costing his team with turnovers, too. Paul is responsible for 18 turnovers in the NBA Finals, leading all other players on both teams. He has to limit his turnovers in Game 6 or Bucks’ fans will have several reasons to start celebrating before tomorrow’s game even begins.

According to multiple die-hard NBA fans and basketball experts, they would be the first to tell casual viewers without a second’s hesitation that Paul’s performance on the grandest stage has been nothing short of disappointing. After Game 5’s loss, Devin Booker told the media, “We came out and did what we intended to do, get off to a great start, and we let it go.” Evident by their franchise history, the Suns are notorious for falling apart in these finals games. Game 6 will be their do-or-die situation.

Nonetheless, in Game 3, Booker scored only 10 points. This one game should be something to keep in mind before placing a bet. In addition to the numbers listed above, he scored a whopping 42 points in Game 4. And, of course we cannot forget about his 40-point performance this past Saturday night in Game 5.

As for Khris Middleton, he finished with 29 points in Game 1 of this series. Middleton then proceeded to score 11 points in Game 2 and 18 points in Game 3. He is averaging 25.4 points in this NBA Finals, so taking a bet on Khris earning more than 25.5 points is risky. Most of all, it could be an unnecessary risk. While he did score a playoff career-high of 40 points in Game 4, it is difficult for Khris to take control of the floor each game. He was on the court for 43 minutes, too.

In Game 5, Middleton scored 29 points, and this was based on 44 minutes played. Either way, it is still possible for his point total to go over 25.5 points in Game 6. In addition to the total points bet, Jrue Holiday is averaging 9 assists per game in this series. Bettors should keep a close eye on him. The Greek Freak is projected to earn another playoff double-double. Giannis could earn his 41st playoff career double-double in Game 6. 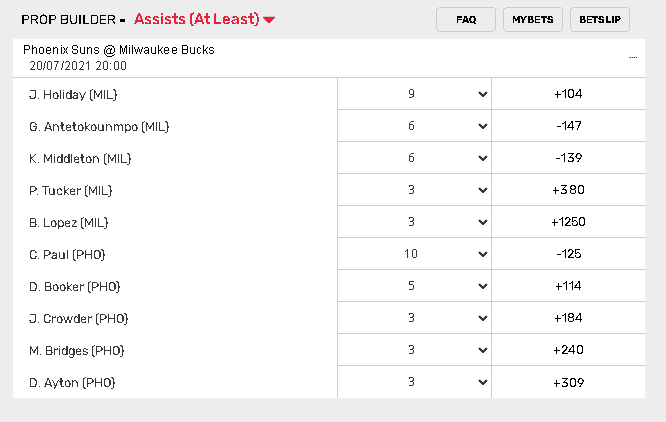