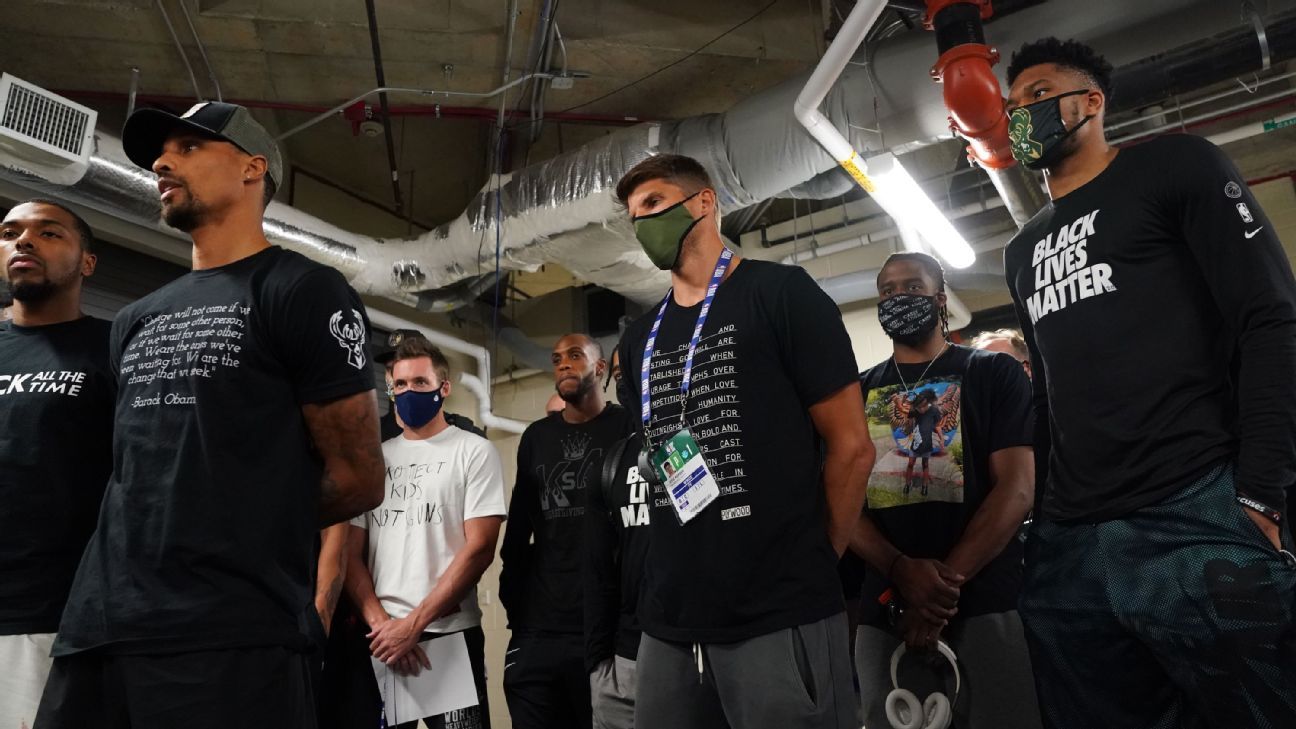 As the world navigated the COVID-19 global health crisis and an outcry for social justice, the NBA set a high standard for how leagues can address health policies, athlete activism and racial and gender hiring practices.

The NBA earned an A in racial hiring practices and a B in gender hiring practices, according to The Institute for Diversity and Ethics in Sport (TIDES) at the University of Central Florida, which released its 2021 NBA Racial and Gender Report Card on Wednesday. The overall grade for the 2021 NBA report card was a B-plus, a slight decrease from an overall A-minus last year largely because of a grading change to include team ownership.

A year ago today, on Aug. 25, the Milwaukee Bucks were set to tip off against the Orlando Magic for Game 5 of their first-round series in the 2020 NBA playoffs. The Magic took the court for warm-ups at AdventHealth Arena inside the NBA’s bubble at the Walt Disney World Resort, but the Bucks were nowhere in sight. Minutes passed — no Bucks. When they still had not emerged from their locker room about 15 minutes before game time, the sports world began to grasp what their absence meant. The Bucks refused to play following a police shooting in Kenosha, Wisconsin, just 40 miles from their hometown, which left Jacob Blake, a 29-year-old Black man, paralyzed from the waist down. This was the most important act of athlete activism since Muhammad Ali refused to go to Vietnam in 1967 and Tommie Smith and John Carlos each raised a black-gloved fist at the 1968 Olympics in Mexico City.

Milwaukee’s action led to a three-day leaguewide shutdown as the NBA and its players devised a plan to help combat our nation’s dire social justice issues through the platform of sport. Commissioner Adam Silver and NBA leadership have a history of standing up in moments of crisis, and this moment was no exception. Since that day, the NBA has taken action in the form of social justice and inclusion initiatives, the launch of a foundation and a social justice coalition, civic engagement and notable hires.

In this year’s report card, in addition to grading the owners category, the NBA was graded for the first time for C-suite executive positions and vice president positions. The percentage of people of color represented in these positions at the team level was 24% and 25.5% for C-suite and team vice president, respectively.

Also new to the NBA report card in 2021, TIDES granted bonus points that impact the overall racial and gender grades. These points are based on crucial social initiatives and hiring milestones. In August 2020, the NBA board of governors, representing all 30 teams, announced that it would contribute $300 million over 10 years in initial funding to establish the NBA Foundation. To date, the foundation has provided two rounds of grants totaling more than $5 million in support of programs focused on STEM, workforce development, mentorship, internships and other forms of education. In addition to the foundation, the league formed a social justice coalition in partnership with the NBPA and convened a cross-departmental social impact task force. These initiatives speak to the league’s commitment to harnessing the power of the organization to create sustained change in the communities that its teams live and play in.

While the NBA has been deeply focused on developing initiatives like these to impact communities at large, they still empower individual players to use their voices for change. In 2021, the NBA created the Kareem Abdul-Jabbar Social Justice Champion award, which recognizes a current player for pursuing social justice and upholding the league’s values of equality, respect and inclusion. Forward Carmelo Anthony, a 10-time NBA All-Star now with the Los Angeles Lakers, was named the inaugural recipient for his activism off the court spanning nearly two decades. Among his many efforts, Anthony partnered with Chris Paul of the Phoenix Suns and NBA legend Dwyane Wade in July 2020 to create the Social Change Fund, which aims to address social and economic justice issues facing Black communities and break down the discriminatory barriers to success.

Although Anthony was named the 2021 recipient, numerous players throughout the league have made their voices heard in impactful ways in the past year. Players and teams supported civic engagement efforts to expand voting access and voter awareness ahead of the 2020 presidential election. Twenty-three arenas were transformed into polling places. Players spread the word with their warm-up gear, calling on fans to “VOTE.” They set the example themselves, with more than 96% of eligible players registered to vote.

But players did not stop there. “Our first step was voting, getting people out to register, getting people out to the polls,” Washington Wizards guard Bradley Beal said in a December media interview. “We accomplished that. Now it’s on to the next issue in society, addressing the systemic racism we still have, addressing the police brutality, addressing all these things we still deal with on a daily basis. The financial curve, that needs to be, that gap needs to be shrunk. There’s a lot of things we need to dive into as a society, and I think us as a PA, as a league, we’re going to continue to push those narratives.”

There were several notable racial hiring milestones for the NBA in the past year. While there was no progress for head coaches during the season under review as people of color remained at 30% for the second consecutive year, that changed dramatically when seven of the eight head-coaching vacancies during the hiring cycle at the end of the 2020-21 season were filled by Black men. That tied their 2012-13 total of 13 Black head coaches and brought the total one shy of the 2011-12 record high of 16 head coaches of color in the 2011-12 season.

Additionally, five people of color were hired to fill general manager vacancies following the 2019-20 season. With a total of 12 general managers of color, the NBA not only reached a record in this category, it also leads all men’s professional leagues. The league also saw an increase from 45.8% assistant coaches of color in 2019-20 to 52.7% in 2020-21. This is the first time in the history of the report card that more than half of the league’s assistant coaches were people of color.

The NBA also outperforms the NFL, MLS and MLB in the percentage of women serving as team vice presidents, at 27.8%. There were four women CEO/presidents at the end of the 2020-21 season. Cynt Marshall, CEO of the Dallas Mavericks, is the only woman of color in this role in the men’s leagues. The number of women representing this position in the NBA accounts for more than the number of women CEO/presidents across all other male professional sports leagues combined.

After several years of stagnation, the NBA saw a significant increase in the percentage of women holding team senior management positions. At 37.9%, an increase of 4.9 percentage points from last year, the percentage of women in senior management roles is higher than it has been in two decades. Women held 42% of all professional positions in the NBA league office, an increase from 40.3% at the end of the 2019-20 season. This constitutes the highest percentage since the 2009-10 report card. Additionally, eight female assistant coaches is the second-highest recorded number of female assistant coaches in league history. Becky Hammon of the San Antonio Spurs garnered well-deserved attention during the most recent hiring cycle as she interviewed for head-coaching positions with multiple teams. While more improvements need to take place, the NBA is on a positive trajectory for gender hiring practices.

This past year, the world called for health safety amid a global pandemic, social justice among countless cases of police brutality and forms of systemic racism, and civil action during the most important election in this lifetime. The NBA and its players listened and acted.

The Bucks’ boycott one year ago underlines the NBA’s level of influence across the sports industry. Not only did the rest of the NBA and its players follow the Bucks’ lead, but teams across the WNBA, MLS, NFL and MLB joined in protest. In fact, the WNBA and its players were leaders in calling for social justice long before the more recent rise of powerful and widespread athlete activism. This kind of impact can take place only in an environment where league leadership has incredible empathy for the players. I am grateful for Adam Silver’s example. “I understand that some of you feel the league should be doing more,” Silver said in a statement following the walkout. “I hear you — and please know that I am focused on ensuring that we as a league are effecting real change both within our organization and in communities across the country.”

My gratitude goes to the NBA and its players on how they have chartered the past year and a half. While there remains room for progress, I look forward to seeing the impact that the NBA continues to have, both on other professional sports leagues and on the United States itself.

Amanda Kiernan made significant contributions to this column.

Richard E. Lapchick is the chair of the DeVos Sport Business Management Graduate Program at the University of Central Florida. Lapchick also directs UCF’s Institute for Diversity and Ethics in Sport, is the author of 17 books and the annual Racial and Gender Report Card, and is the president of the Institute for Sport and Social Justice. He has been a regular commentator for ESPN.com on issues of diversity in sport. Follow him on Twitter @richardlapchick and on Facebook.