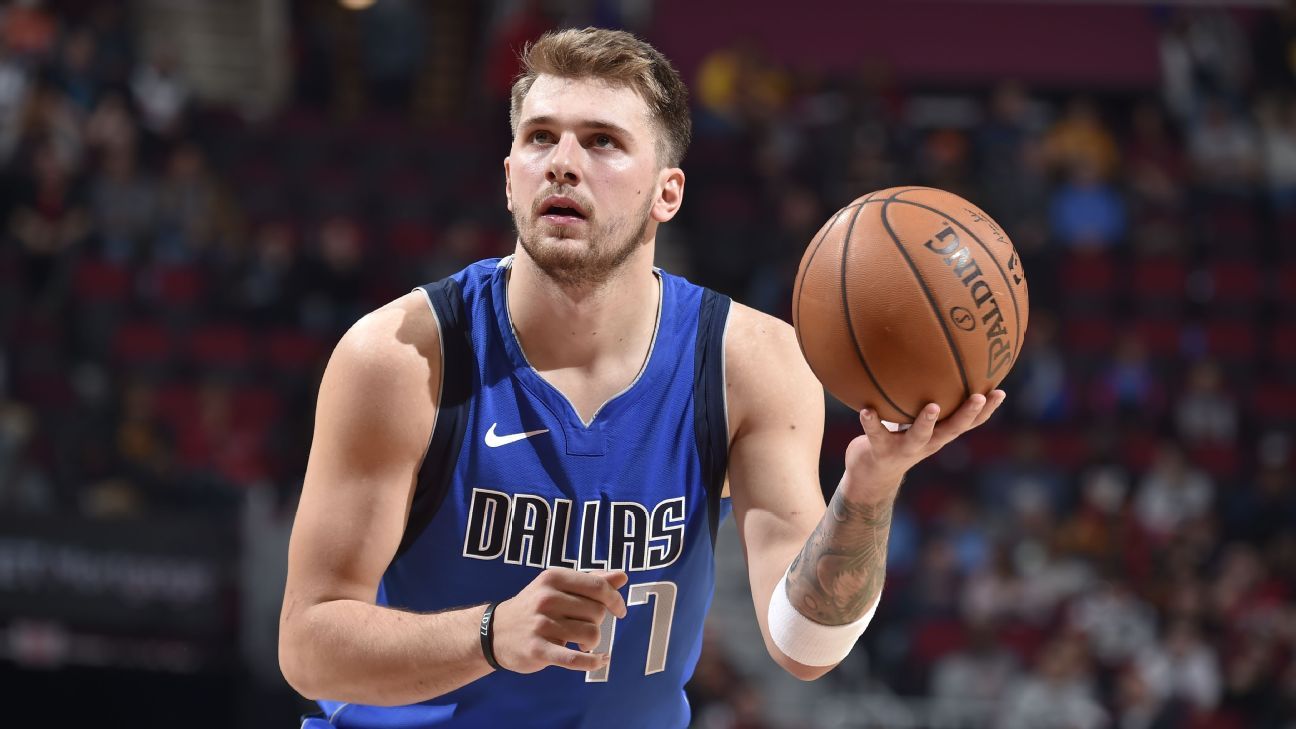 The best players in the NBA are elite for a reason. The Milwaukee Bucks‘ two-time MVP, Giannis Antetokounmpo, is one of the premier two-way players in the league. Dallas Mavericks phenom Luka Doncic is among the most dangerous players in the world at just 22 years old.

Still, even the best could be better.

What if Giannis had a jump shot? How much better would the Bucks’ star be if he could consistently score beyond the paint?

What if Russell Westbrook embraced a floater? Can the Los Angeles Lakers star add the shot as his dunk frequency continues to decline?

And what if Luka’s already stellar offense was helped along by reliable free throw shooting? Would the young star already be an MVP?

Can Karl-Anthony Towns improve his defense and become an elite two-way player for the Minnesota Timberwolves? His offensive prowess is already on par with that of Antetokounmpo and Philadelphia 76ers big man Joel Embiid, but Towns’ play on the other side of the ball has kept him out of MVP conversations.

Our experts break down which skills these four stars are missing from their repertoire that could take them to the next level.

Antetokounmpo is not only a newly crowned NBA Finals MVP, but he also is arguably the most dominant player in the world right now. Antetokounmpo led the Bucks to the title with an incredible two-way virtuoso performance. He made huge plays on both ends. He owned the paint. He led all Finals players in scoring, rebounding and blocks.

The one thing he didn’t do is score away from the hoop.

The missing piece in the bag is simple: shooting. In Milwaukee’s historic playoff run, Antetokounmpo made just 19% of his 3s and 59% of his free throws. If Antetokounmpo can develop a better feel for converting shots from these distances, he will emerge as one of the most dominant players this league has ever seen. It’s that simple. He already has the most dominant interior force in pro basketball right now, but if he can develop even an average shooting arsenal, his prime will be downright frightening.

At 26 years old, he already has logged a 50-point masterpiece to close out a Finals win. That game demonstrated how good he could be if he became an elite free throw shooter. He made 17 of 19 free throws; as a team, the Phoenix Suns made 16 of 19. As one of the most physical players in the game, a reliable free throw could enable Antetokounmpo to seek out contact, rack up easy points at the stripe and get opposing bigs into foul trouble.

On the flipside, a shaky free throw not only hurts his own productivity, it becomes a liability in big moments. His struggles at the line in the 2019 playoffs against the Toronto Raptors were costly. And during the Bucks’ run to the championship, he made just 8 of his 14 freebies in the epic Game 7 versus the Brooklyn Nets that came down to Kevin Durant‘s toe.

In 2021, shooting is the most important skill in the game, but Antetokounmpo’s title run proves that other things — like owning the paint on both ends — are still pretty important. Even so, if he can develop a consistent ability to score beyond the paint, the sky’s the limit for Antetokounmpo and Milwaukee.

It was March 2011, year three of Westbrook’s career. He had just made his first All-Star team and was rapidly ascending as one of the league’s brightest and boldest stars. His game, built on a combination of fury, force and tenacity, was taking him to heights no one anticipated when he was selected fourth overall in the 2008 NBA draft.

He led the league in turnovers as a rookie, was runner-up to Steve Nash in that category in year two and was on track to lead again in his third season. And many of those turnovers were happening the same way: Westbrook driving down the lane, launching at an absurd distance from the basket and barreling over a defender for a charge. So it seemed an adjustment could be beneficial, something to counter defenders who were anticipating his high-flying rim attacks.

A reporter gently made the suggestion that a floater could be a worthwhile development for Westbrook. With his skill set and ability to torch defenders at the point of attack, he could live in the space between the restricted area and free throw line. Because to that point, it was either a pull-up jumper or all the way downhill to the rim.

Westbrook absorbed the question and considered his response.

“That’s not my focus,” he said. “Why would I shoot a floater when I can dunk on you?”

Then-Oklahoma City Thunder coach Scott Brooks was asked about it too. His answer drilled down on the truth.

“Have you seen his floater?” Brooks laughed. “I’ve seen it three times. It’s not pretty.”

The 2021-22 NBA season tips off in October with a pair of star-studded doubleheaders on ESPN.

The floater has become a powerful weapon in the modern NBA, with stars such as Trae Young, Luka Doncic, Chris Paul, Kyrie Irving, James Harden and many more deploying it with regularity. As defenses try to nudge shooters into low-efficiency, non-paint 2-pointers, the floater has become a weapon to attack sagging drop coverage schemes.

Defiant as his original answer was, Westbrook has dabbled with a floater at times, though he has never fully committed. His mindset has largely remained unchanged: Why compromise with a floater when he can take two more dribbles and get all the way to the rim?

The reason was evident in his last two postseason series with the Thunder, when Rudy Gobert dropped deep into the paint, forcing midrange jumpers, and the Portland Trail Blazers the following season literally yelled from the bench, “Let him shoot it!” when Westbrook had the ball at the elbows. Contrast that against the Utah Jazz‘s next series against the Houston Rockets, when Harden put Gobert in a pretzel nearly every possession, alternating between floaters and lobs to Clint Capela as the Rockets won in five games.

Luka Doncic: One flaw at the free throw line

At age 22, Doncic has developed a remarkably deep bag of skills, allowing the Mavericks’ point guard to establish himself as one of the NBA’s elite offensive forces. Doncic sees the floor like few have, often making extremely difficult passes seem routine. He has the gravity and guile to manipulate defenses, creating angles for late-developing lobs or crosscourt laser beams to an open corner 3-point shooter. His passing is probably his best attribute — quite a statement for a superstar who has averaged 33.5 points per game in the playoffs.

Doncic has phenomenal handles, especially considering his husky, 6-foot-7 frame. He amazes Mavs player-development coach God Shammgod — the man who earned a reputation as a ballhandling legend while growing up on the New York City playgrounds — with how quickly he masters complicated dribble combination moves.

That has helped Doncic emerge as an effective, three-level scorer. He isn’t an explosive leaper, but he is an effective finisher around the basket (66.2% within five feet last season) due to his combination of craft and strength. He can launch his step-back 3 almost at will, the key to Doncic ranking 10th in 3s made (192) last season despite a slow start behind the arc. And Doncic unveiled a lethally effective midrange game last season, prominently featuring a Dirk Nowitzki-like, one-legged, turnaround jumper that he often pops after stopping on a dime and spinning.

It’s hard to find flaws with Doncic’s offensive game. Until he gets fouled.

In terms of skills, the simplest one stands out Doncic’s biggest weakness: He is a mediocre free throw shooter who is prone to go into funks.

That’s a problem for the player who has the ball in his hands so often and constantly draws contact.

It’s the one area of Doncic’s game that he hasn’t displayed significant progress since arriving in the NBA. He is a 73.5% free throw shooter for his career, and he shot 73.0% from the line last season. That shouldn’t be the case for a player who has such a soft midrange touch. Doncic was one of nine players who shot 48% or better from midrange on at least 175 attempts last season. His free throw percentage was an extreme outlier among the group, with seven of the other eight shooting 85% or better from the line and the straggler in that bunch hitting 81.2%.

Towns has averaged 25.0 points and 11.5 rebounds per game during the past three seasons, numbers very comparable over that stretch to elite big men like Joel Embiid (26.4 PPG, 12.1 RPG) and Anthony Davis (26.1 PPG, 10.3 RPG). But while both of the latter two have finished in the top three in MVP voting at least once, Towns has never even received a vote. Why?

Embiid and Davis are excellent defensive players, capable of anchoring their teams’ defenses and leading them to strong results. Defensive anchors are typically big men who excel at playing strong off-ball defense, helping their teammates and protecting the paint against high-percentage shots. For a big man, while on-ball defense is a plus, the true impact is typically measured in off-ball defense.

And to put it mildly, Towns has struggled as an off-ball defender, particularly when trying to defend in situations when he is involved in screens. According to Second Spectrum, over the past two seasons, Towns has allowed 1.072 points per direct off-ball screen when it’s his man who sets the pick. This ranks 335th of 446 players to have defended at least 100 screens. And when the man Towns is defending is screened off-ball, Towns has allowed 1.183 points per chance and a whopping 1.5 points per direct pick. These both rank last in the NBA, 333rd among 333 players to have been screened off-ball at least 100 times.

Towns’ off-ball defensive struggles also are captured in his impact on his teams’ defenses. The Timberwolves have ranked 28th and 20th in team defensive rating over the past two campaigns, with Towns posting a negative defensive real plus-minus in both. During the 2019-20 season, Towns had by far the highest offensive RPM among centers in the NBA, with a 5.8 that dwarfed then-future MVP Nikola Jokic‘s 2.5 and Embiid’s 1.81. However, Towns also finished last among centers with a minus-3.68 DRPM, so his net score was far behind the other elite bigs.

If Towns were to improve as an off-ball defender and become a true anchor, it could vault him into the MVP conversation, as well. And with the young talent that they have amassed in Minnesota, an MVP-caliber, defensive anchor in Towns could be the difference between an exciting young Timberwolves squad and one that could legitimately challenge for the playoffs and beyond.