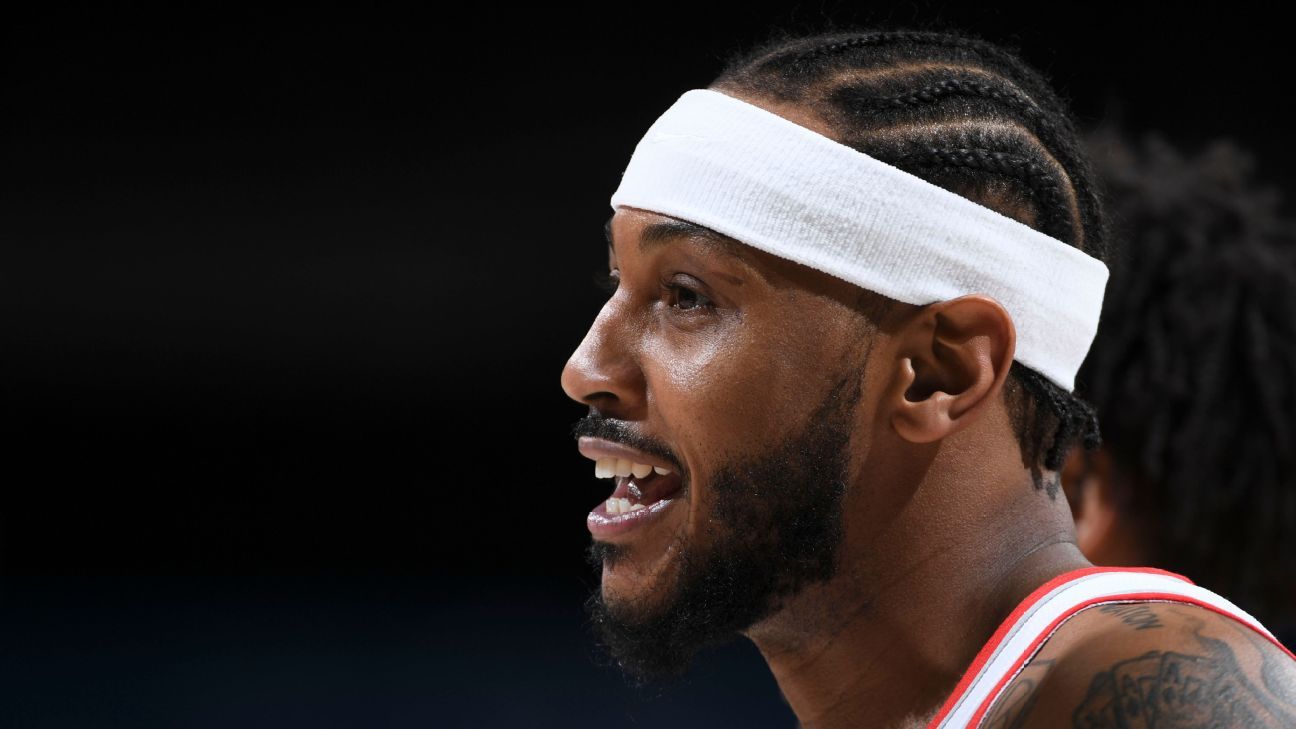 EL SEGUNDO, Calif. — Nineteen seasons into his NBA career and with a slew of accomplishments to show for his tenure, Carmelo Anthony‘s résumé would suggest an automatic featured role for this season’s Los Angeles Lakers.

However, Anthony, 37, is open to whatever his new team asks of him as he continues to pursue the championship that has eluded him throughout his time in the league.

Anthony played 69 games for the Portland Trail Blazers last season and was a starter in only three of them. It was the first time in his career, save for the ill-fated 10-game stint he had with the Houston Rockets in 2018-19, when he was primarily used as a reserve.

“I’ve had experience being a starter for 18, 17 years and had an experience of coming off the bench for one year,” Anthony said. “It’s not something I think about.”

Lakers coach Frank Vogel said he is still thinking through the lineup combinations he’ll have at his disposal this season, but has already let Anthony know he will be a necessary piece to L.A.’s success.

The coach will have to wait to see how Anthony fits in a game situation. Anthony, LeBron James and Russell Westbrook will all sit out Sunday’s preseason opener against the Brooklyn Nets for rest, Vogel said. Trevor Ariza, who has missed most of training camp with a sore right ankle, will also be sidelined. Anthony Davis will play, but likely just the first quarter, the coach said.

But when Anthony does play, there will be minutes for him. Vogel recalled pointing out to Anthony this summer how trading Kentavious Caldwell-Pope, a 41% 3-point shooter, and Kyle Kuzma, who shot 36.1% from deep, depleted L.A.’s pool of shooters that was already shallow to begin with. While Anthony played a career-low 24.5 minutes per game last season, he shot 40.9% from 3 — his second-best mark since coming into the league.

“We’ll probably not talk about it again until we get closer to the regular season,” Vogel said. “But I do think he’s going to have a big role on our team.”

Vogel’s communication plan is just fine by Anthony. He credited the “clarity” that his new coach has opened up camp with as he implements offensive and defensive schemes with a roster filled with 11 fresh faces since last season.

“Whatever he wants, let’s do it,” Anthony said. “I’m not even trippin’ about that at this point. Because let’s go. Let’s go win.”

As Anthony spoke to reporters his face showed that his message wasn’t just lip service. His left eyelid was scratched and swollen from a run-in with Davis on the practice court, but he laughed off the injury with the same good nature with which he is processing his role in the lineup.

“You got to ask Anthony Davis, man. Ask AD. He tried to take me out early,” Anthony said, clearly joking. “Little war wound, that’s it.”

That attitude reflects his appreciation for the game at this stage of his career, a career he isn’t trying to put an expiration date on just yet.

Lakers president of basketball operations and general manager Rob Pelinka has, on several occasions, cited the Tampa Bay Buccaneers‘ 44-year-old quarterback, Tom Brady, as a prime example of how professional athletes are redefining how long a prime can last. Anthony was asked about Brady’s claim that he could still compete in the NFL when he’s 50, and put a limit on just how long his passion will last.

“Brady’s got an offensive line,” he quipped. “They’re going to protect Brady. I don’t want to do that. I ain’t playing to no 50, I’ll tell you that.”