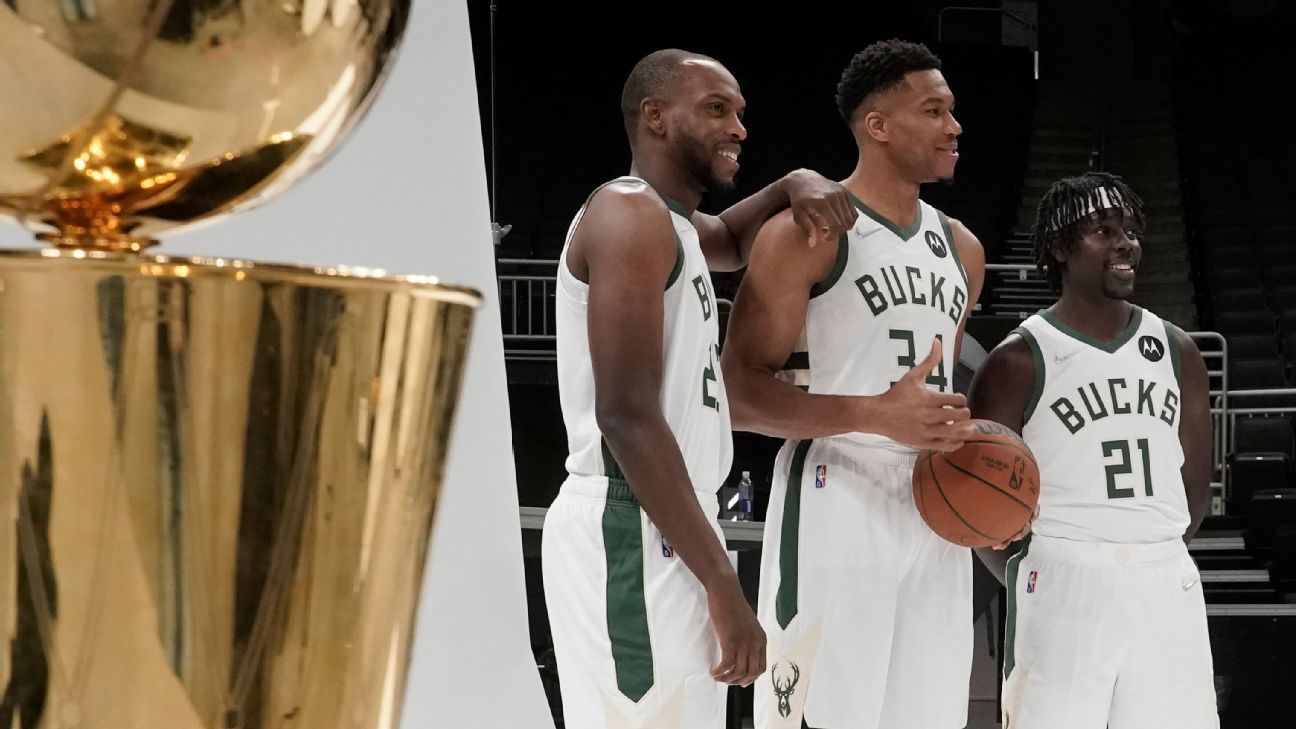 MILWAUKEE — Before winning his first NBA championship, Milwaukee Bucks star Giannis Antetokounmpo used to imagine how it would change his life: how it would be a weight lifted off his shoulders and how he’d finally be able to exhale.

“But it’s false,” Antetokounmpo said after the Bucks received their 2021 championship rings. “If you’re a competitor, your mind creates something different, a different challenge. You might say, ‘OK I did it one time, I need to do it a second time.’ And when you do it a second time, you want to do it a third time.”

For players like Antetokounmpo, there’s always a new goal to achieve, always a new slight — real or perceived — to acknowledge.

“We’re still the Milwaukee Bucks. At the end of the day, there’s a lot of people out there that still don’t believe we can do it again,” Antetokounmpo said.

Antetokounmpo, 26, has already found his place among the basketball legends; last week he was named to the NBA’s list of 75 greatest players of all time at the start of his ninth year in the NBA. He is already a two-time MVP. He has won a Defensive Player of the Year award. He has made five consecutive All-Star teams.

A week into the NBA season, the Bucks (3-1) don’t appear to be suffering from a championship hangover. Not on a team with Antetokounmpo as its best player. The Bucks, who have moved up to No. 1 in ESPN’s latest Power Rankings, had a dominant season-opening victory over the Brooklyn Nets, followed by wins against the San Antonio Spurs and Indiana Pacers despite a rotation undermanned by injuries.

Nets star Kevin Durant saw the difference in the Bucks from the playoffs a few months ago to opening night last week.

“[They] have a core of guys that have been together for four or five years,” Durant said. “And then the whole coaching staff just getting more comfortable with each other and then having some success winning a championship, that naturally brings confidence.

“That will be good for them all year. I know they are going to use that to squeeze out games — that experience of winning a championship and going through deep runs together — that is going to win them a few games this year.”

The Bucks have won the most regular-season games in the NBA over the past three seasons (162), although two of those campaigns ended in massive disappointments — losing a 2-0 postseason lead to Toronto in 2019 and an embarrassing loss to the Miami Heat in the bubble in 2020.

“We definitely have a lot more confidence in ourselves,” Bucks forward Khris Middleton said.

“It’s natural, we should. We are the champs. We’ve been through every type of situation you could go through. So at the same time, you know what to expect. There’s no need to worry about failing because you know what you need to do.”

Milwaukee’s stage is set for success

Before the Bucks’ first practice together in September, Middleton and Antetokounmpo addressed the team together on the practice court. Their message: Forget about last season.

Talk about setting a tone.

“We’ve got great leaders on our team,” Milwaukee guard Pat Connaughton said. “They’re humble. So we have that confidence, but it’s not cockiness. And I think that line is very important.”

“That holds a lot of value when you’ve got these guys that are champions now … and paving the way for all of us other guys,” said guard George Hill, who was with the Bucks from 2018 to 2020 before rejoining them this season. “It’s easy to follow suit when you have guys like that.”

Middleton and Antetokounmpo are entering their ninth season together in Milwaukee. They bonded seamlessly with their third star, Jrue Holiday, who was acquired in a trade before the start of last season. Middleton and Holiday became the first pair of teammates to win an NBA championship and Olympic gold medal in the same year since former Chicago Bulls greats Michael Jordan and Scottie Pippen did so in 1992.

Since returning from Tokyo, Middleton and Holiday forged an even tighter bond.

“Oh yeah, [their relationship], it’s grown a lot,” Antetokounmpo said on Zoom after the first preseason game. “They sit next to each other in the locker room now. Yeah, they go out to dinners. Dates and stuff.”

“Hey, you sound jealous, man. You all right?” Middleton, who was waiting to join the call next, inquired from the background.

While the jovial attitudes persist in Milwaukee, outside of it, the Bucks’ biggest foes in the Eastern Conference have been engaged in wars from within.

The Philadelphia 76ers have been locked in a public stare-down with disgruntled star Ben Simmons, who has yet to play in a game and was hoping to see his offseason trade request filled before now.

The Nets, the preseason betting favorites to win the NBA championship, started the regular season without guard Kyrie Irving, who will not practice or play with the team until he complies with New York City’s COVID-19 vaccine mandate.

There has been no such melodrama in Milwaukee.

Antetokounmpo quashed rumors that he might leave by signing a long-term extension before the start of last season. Middleton and Holiday are both locked in long-term as well. Both coach Mike Budenholzer and general manager Jon Horst received extensions this offseason. The Bucks have become the face of the anti-super team in the NBA, a small-market franchise whose best players didn’t decide to leave other teams to join forces.

But the path to repeating will still present its challenges. The Bucks’ offense was below average during the playoffs — 11th out of 16 teams in points per 100 possessions (although their defense was No.1) — and they will need to find ways to generate points more smoothly this season. Holiday and Middleton went straight from the Finals into the Olympics, so their durability will be tested after an abbreviated offseason.

Leaguewide, the Nets are loaded with All-Stars and offensive firepower. The Los Angeles Lakers have had their bumps out of the gate, but they reloaded with their own star experiment. The Heat, who have faced the Bucks two consecutive years in the playoffs, had a blowout win in their home opener against Milwaukee. And young teams such as the Atlanta Hawks and Phoenix Suns now have another year of experience after being dispatched by the Bucks last postseason.

After watching the highlight videos during the ring ceremony opening night, filled with flashbacks of a young Antetokounmpo and Middleton during their first seasons together, Antetokounmpo pointed to the way they laid out on the floor, diving for loose balls.

“If our approach to the game does not change, the guys that are out there and Coach Bud, it’s hard to change the culture of this team,” he said.

Dynasty in the making?

Prior to Milwaukee winning the title last summer, the Bucks’ road to contention provided far more questions than answers:

• Would Antetokounmpo re-sign with small-market Milwaukee?
• Was Middleton a worthy No. 2?
• Did they give up too much for Holiday?
• Who would be the next coach if they didn’t win?

Now? Not as many questions.

Get ready for the new season with the latest intel, projections and analysis from ESPN’s team of NBA experts.

“I feel like people are being taken care of and we’re going to do this for a long time. You see a lot of times in organizations that were not able to go over that hump, they break up. That did not happen to us. I’m happy that we’re able to … be able to do it for the next four, five, 10 years, whatever the case might be.”

That sounds like dynasty talk. Antetokounmpo wasn’t willing to get too far ahead of himself just yet. Real or perceived, that’s what Giannis and the Bucks are up against — to prove their small-market victory, one that came in a year with superstar injuries all across the NBA, wasn’t a fluky one-off.

Not since the Golden State Warriors‘ championship in 2015 has a title team looked like it was still on the ascent. Consider the way the Heat responded during the 2012-13 regular season after winning the title the season before: with 66 wins and a historic 27-game winning streak en route to a repeat. The NBA hasn’t seen a repeat champion since the Warriors won back-to-back titles in 2017 and 2018, and only three teams — the Warriors, Heat and Lakers — have repeated as champions since the turn of the century.

“Winning a championship, it fulfills a lot of dreams and a lot of hard work,” said Dallas Mavericks head coach Jason Kidd, who coached the Bucks from 2014 to 2018, crucial years in Antetokounmpo and Middleton’s development. “A lot of times there’s a dynasty — when you look at the Bulls, the Spurs, the Warriors. When you talk about Milwaukee winning that championship, all the hard work that Khris and Giannis put in to finally climb that mountain and be at the top. It helps you go forward.

“Is your appetite big enough to try and do it again? That’s what the great ones do.”