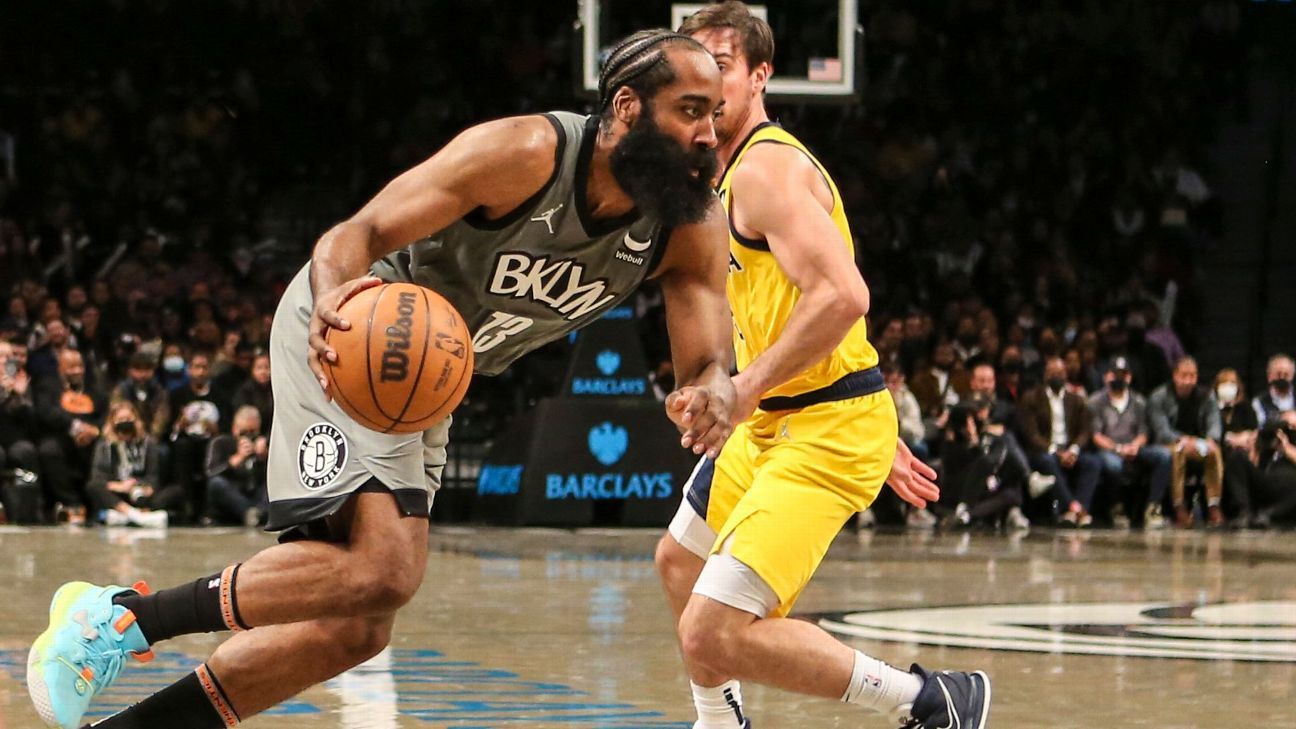 NEW YORK — James Harden was in his bag Friday night, dribbling, creating space, draining 3’s and letting everyone know that he was starting to feel more like himself as he yelled out during a timeout while clenching his fists and flexing his arms.

Harden also was finally back at a place he knows well — the free throw line. After going to the line a combined 15 times in his first five games, Harden went 16-for-19 from the stripe and scored a season-high 29 points to go with eight assists and eight rebounds to help the Nets take a 105-98 win over the Indiana Pacers at Barclays Center.

This was, by far, Harden’s best game of the season after getting off to a slow start and averaging 16.6 points entering Friday.

“It wasn’t 30, obviously,” said Harden, who admitted on Wednesday that his body and game aren’t quite at the point where he can score 30 or 40 points a night. “I keep saying it — every single game, I feel good, I feel better today, I continue to work on off-days and non-game days, and on game days continue to get to the basket and shoot my shots.

“Nothing’s gonna change. Eventually things are gonna happen where it’s consistent and I’m out there playing [like] myself.”

Earlier this week, Nets coach Steve Nash said he felt Harden had unfairly become the “poster boy” for this season’s rules changes, with officials cracking down on “overt, abrupt or abnormal non-basketball moves” of offensive players with the ball looking to draw fouls.

Before Friday night’s game, Harden had not gone to the line more than four times in a game this season. But against the Pacers, he went to the line nine times in the second quarter alone when he scored 13 points.

This was the 72nd time in his career that Harden had at least 15 free throws, the most in NBA history, according to ESPN Stats and Information research.

“It was just me being aggressive,” Harden said. “The first couple of games I wasn’t aggressive. I was aggressive in spurts, but just trying to be aggressive for four quarters. I had that burst, that speed of getting to my spots, whether I was getting to the basket or shooting my shots. I felt pretty good out there for an entire game.”

The Nets, though, were fortunate to have Durant in the fourth quarter. After play was stopped with a foul while Durant was driving, he fired the basketball into the stands with 4:40 remaining in the third quarter.

Crew chief Sean Wright told a pool reporter after the game that in real time, the official whomade the call didn’t think the ball entered the stands with force.

“After seeing the video postgame, we did see that the ball did go into the stands with force,” Wright said. “And Kevin Durant should’ve been ejected.”

Durant said he was trying to hit the backboard and shouldn’t have even done that.

“I don’t know, man, I thought I was at the gym by myself and in a pickup game, not an NBA game,” Durant said of his lapse. “And I can’t do that. I could have cost my team the game. But it won’t happen again — I hope so.”

Durant added: “I didn’t know you could get ejected over that. I’m glad I stayed in the game. I’m sure a hefty fine is coming, but I don’t mind giving.”

LaMarcus Aldridge helped pick up the slack for the Nets, scoring nine of his 21 points in the fourth quarter to help Brooklyn hold off a pesky Pacers team.

The 16-year veteran also became the 48th player to reach 20,000 career points and just the seventh active player to do so, joining Harden and Durant. It was a milestone that Aldridge didn’t think he would reach after he retired last April due to experiencing an irregular heartbeat. He was medically cleared to return this season.

“It feels good, man,” Aldridge said. “A true blessing. Definitely didn’t think it was going to happen after what happened last year. Stuck with it, fall back and definitely felt good to get it done and be back out there. Just feel blessed.”