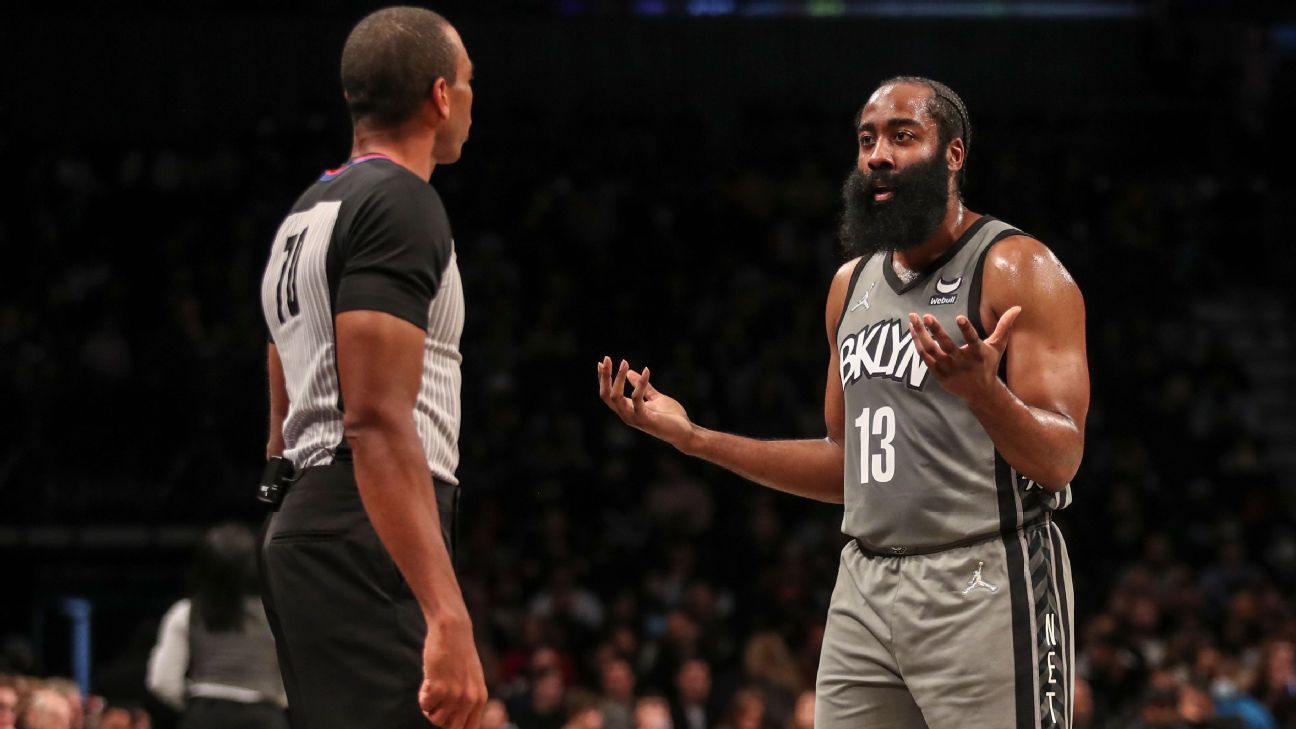 He added that his officials are still working to strike the right balance between not calling those non-basketball moves and missing some defensive fouls, and that the league is still committed to offensive players not being held and grabbed — what the league refers to as “freedom of movement.”

“The referees have done an excellent job,” McCutchen said on a conference call with a handful of reporters after a meeting of the league’s competition committee earlier Tuesday. “I think in any of this, there’s some adjustment period on the shooting foul itself, as to what constitutes the things we’re asking.

“There’ve been a few instances, nothing that’s raised to a significant level, where we would still want a defensive foul where it’s getting lumped into a non-basketball move. We’re in the middle of that adjustment period with the staff. We have staff calls at a higher cadence than we would when we’re not implementing something as significant as this, and we’re showing them examples so that we can adjust in real-time to meet the demands of the league.

Before the season began, the NBA — and specifically McCutchen — made it clear in a series of presentations that the league’s emphasis this year was to eliminate “non-basketball moves” — ones the league has deemed to be “abnormal, abrupt or overt” — from the game. The result has been a decrease in scoring, fouls and free throws per game and a near elimination of those kinds of plays being called as fouls through the opening two weeks of the season.

At the same time, there’s also been a perceived increase in physicality on the court — one that players have, at various points, voiced frustration over. League officials, however, said the data doesn’t support the players’ argument.

“I’ll just say that from a data perspective we’re not seeing any evidence of that increased physicality that we’re hearing about,” said Evan Wasch, the NBA’s Executive Vice President of strategy and analytics. “So, for example, the number of personal, non-shooting fouls is actually up slightly. That’s inclusive of plays on the perimeter, handchecks, etc. And we’re not seeing an increase in incorrect non-calls, or so-called missed calls, in our game review data, which you would expect to see if defenders were committing more fouls that were going uncalled.

“So again, we’re monitoring it, and listening to feedback, but we’re not seeing any direct evidence in the data of that so-called increase in physicality.”

Overall, though, the message from the league — and one it said was echoed by the members of the competition committee, which is made up of owners, executives, coaches and players — was that they are pleased with the way the non-basketball moves have been called, and the way it has, in their eyes, positively changed the way the game is viewed.

“It’s free flowing in one way, the actual ability for a guy to pump fake and go through a normal shooting motion thereafter is getting back to kind of the essence of the game,” said Byron Spruell, the NBA’s president of league operations. “And we’re getting away from the gimmicks. Not to mention names there, but getting away from the gimmicks, and I think that’s part of what we intended to set out to do here.

But while the league pushed back on the idea that there is an increase in physicality on the court, McCutchen said that he’s already working with the referees to try to take in the feedback from the players to both address their concerns, and make sure nothing becomes a problem that isn’t already.

“I think one of the first things we do when we hear that criticism is players are playing the game,” McCutchen said. “To discount what they’re telling us would not only be foolish, it would be at a point where we aren’t doing our job properly. So we always want to listen. The first place we look is the data.

“The data right now, there’s no evidence of that. But that doesn’t mean that just because the number of fouls aren’t there, doesn’t mean a different type of play isn’t starting to come along, and we need to monitor that. … we’re monitoring that. We’re looking at drives to the hoop to make sure we’re within our guidelines. We’re looking at freedom of movement to see we’re within our guidelines. Then when we do that with our expertise, and compare what we’re seeing through our expertise with the data, we have a fuller picture of whether we need to address that.”

Spruell added that there’s been minimal interaction about the new basketball, with Wilson replacing Spalding as the league’s official partner this season. He said outside of some brief discussion about the way the balls are wearing, he said there’s been little feedback otherwise.

Sources also confirmed to ESPN that on the competition committee call Tuesday, there was a discussion about the increase in “take” fouls — the practice of grabbing a player intentionally to stop a fast break. Already a fairly common practice, it’s been even more so this year. As a result, the committee agreed to attempt to come up with a potential rule change to eliminate the tactic. While such a change wouldn’t happen this season, it could happen as soon as next season.