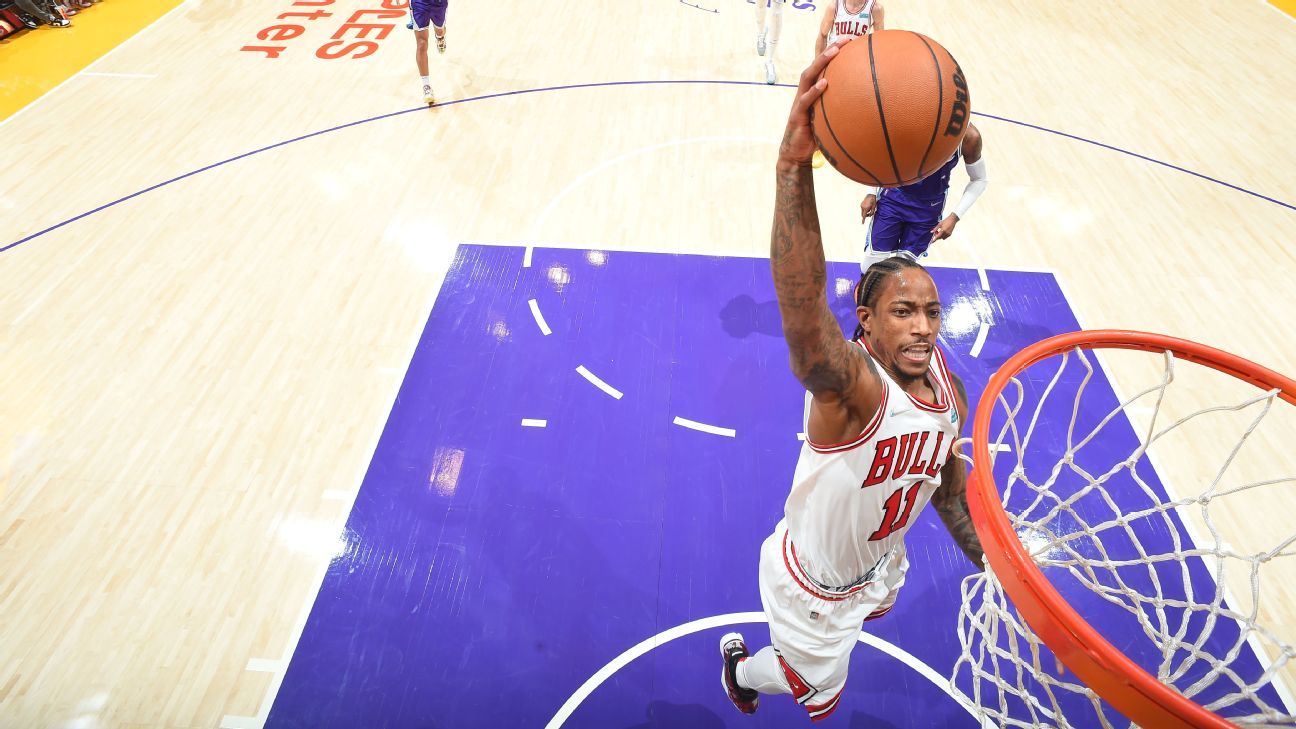 LOS ANGELES — Bulls forward DeMar DeRozan scored a season-high 38 points on Monday night to help lift Chicago to a 121-103 victory against the Los Angeles Lakers, the fifth time in the past nine games he has notched at least 30 points.

Even though DeRozan reached his season high early in the fourth quarter and had a chance for his first 40-point game since 2018, with some urging to go for it from teammate Zach LaVine, he was content with his final line as the Bulls secured a commanding win.

“[LaVine] was trying to force me to get 40 tonight. I told him I was tired,” DeRozan, who also had six assists, said with a laugh.

DeRozan is off to a fantastic start in his first season with the Bulls, scoring 26.9 points per game (third in the NBA behind only Brooklyn’s Kevin Durant and Golden State’s Stephen Curry) while shooting 51% from the field and adding five rebounds and four assists.

DeRozan cited people calling him “washed” in recent years and questioning his fit with the Bulls as motivation for his renaissance this season.

“I can go down the list of just being counted out, being looked over,” DeRozan said. “So many chips that’s on my shoulder that I carry. And just wanting to be a winner and wanting to enjoy this ride. We can’t play this game forever, so I want to get as much as I can out of it.”

Even in his 13th season in the NBA, at 32 years old, DeRozan is proving that he still has plenty left to contribute to a winning team.

“I never looked at age as being an issue,” he said. “I never looked at it. People put the age limit on everything, and I never did. The way I worked, the way I take care of my body, the way I prepare, I knew what I was capable of doing. I just took different roads the last couple years of playing basketball, trying to do the right thing, figuring it out.

“This time, just knowing my ability was always there, I never lost confidence. I never thought I couldn’t be who I was before. Chicago allowed me to completely be myself.”

The win marks the first Bulls victory against the Lakers since 2016, and Chicago completed a sweep of the Clippers and Lakers on a back-to-back at Staples Center to improve its record to 10-4.

DeRozan helped lead the charge by scoring at least 35 points on back-to-back nights, but he got plenty of help. Lonzo Ball knocked down seven 3-pointers and finished with 27 points, while LaVine added 26 points. Those three players combined to score or assist on 110 points on Monday night.

“I think we are one of the top teams in the NBA,” Ball said. “Obviously, we still have a long way to go, a lot to improve on. But we’re moving in the right direction.”

DeRozan has been off to one of the most efficient starts of his career while showing what a scoring threat he can still be in the half-court offense, where all but four of his points came on Monday night. He scored on five different Lakers, according to ESPN Stats & Information research, punishing Carmelo Anthony for 12 points on 4-of-6 shooting when they matched up.

And if the Lakers left DeRozan open, it usually resulted in points. Eight of his made field goals were uncontested, including both 3s he knocked down.

“I think a lot of people counted him out saying he’s on the back end of his career, but this is probably one of his best years that he’s had in the NBA,” Ball said. “I’ve always known what type of player he was. I don’t know how he got kind of lost in the shuffle in San Antonio, but he’s one of the best players in this game and I think he’s going out there and proving it every night.”

The Whiteboard: The Boston Celtics offense looks broken
JJ Redick goes all-in on Stephen A. Smith and fans are loving it
LeBron James got Pacers fans kicked out of their seats (Video)
NBA Twitter roasts Kyle Kuzma for outrageous pregame fit
How Carmelo Anthony went from No. 1 option to top reserve