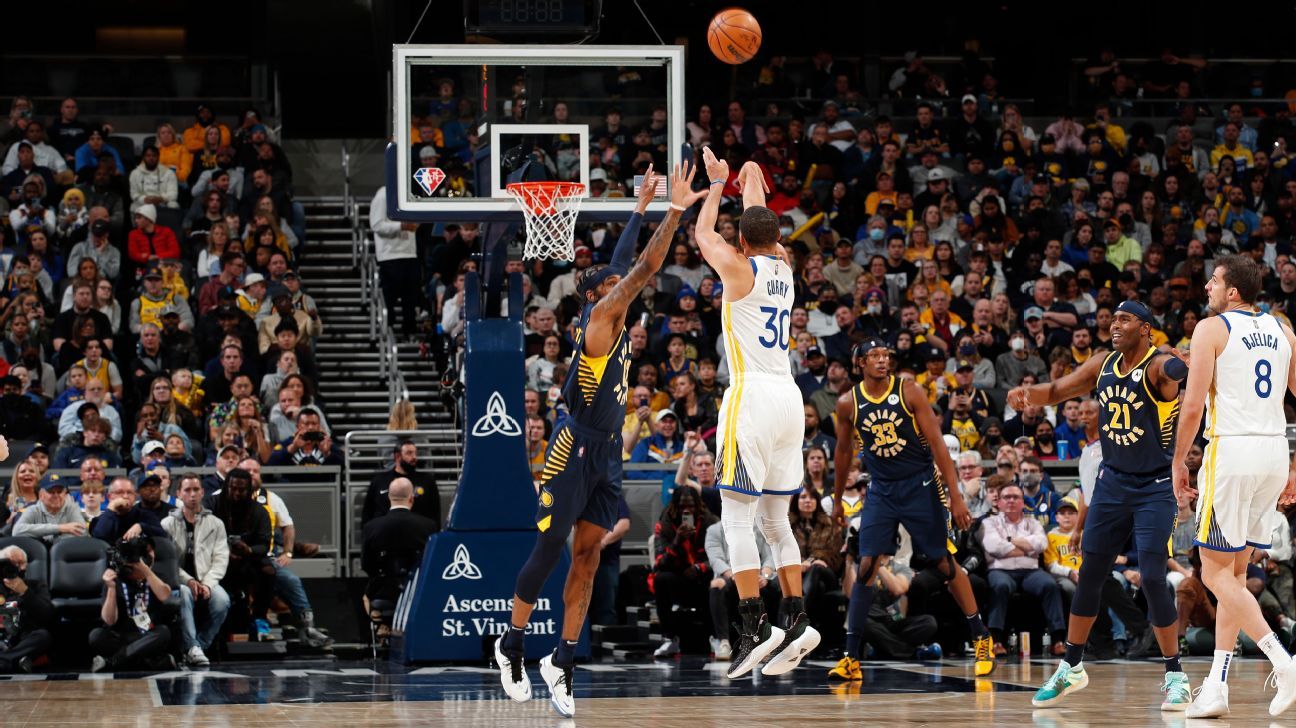 Golden State Warriors star Stephen Curry finished with five 3-pointers in Monday’s 102-100 win over the Indiana Pacers, putting him on the doorstep of the NBA’s all-time record that he will now look to break Tuesday night on the league’s grandest stage — Madison Square Garden.

The 33-year-old sharpshooting guard was 5-for-15 from beyond the arc against the Pacers, giving him 2,972 3s for his career — one behind Ray Allen (2,973) and two away from sole possession of the record.

A near-sellout crowd was less interested in the game’s result than seeing history. Fans roared each time Curry lined up a 3, gasped when he drove to the basket and erupted each time he inched closer to Allen’s mark.

For the final 90 seconds, everyone inside Gainbridge Fieldhouse was standing. Some stuck around to give the two-time MVP and three-time NBA champ a proper sendoff after he finished postgame interviews.

But this was not the indomitable Curry everyone expected. He missed his first three beyond the arc, and some of his attempts were badly off the mark. Even Warriors coach Steve Kerr noted Curry had been trying too hard over the past several games.

“I’m enjoying the moment, knocking on the doorstep. It’s pretty surreal,” Curry said. “You just keep playing basketball, taking shots you think you can make and enjoy the experience.”

Curry’s final 3 got the Warriors within 100-98, and on the next possession, he decided against a 3 and drove for the tying layup with 48.5 seconds to go. Then, after getting a defensive stop, Curry had a chance at tying the record, but his attempt was off the mark and Kevon Looney broke the tie with a putback with 13.8 seconds left.

“The play was set up perfectly, the 3 just didn’t go in and Loon did what Loon does, which is go get the offensive board to give us the lead and eventually the win,” said Draymond Green, who had 15 points and nine rebounds.

The Pacers made sure Curry didn’t become the new record-holder in Indianapolis. Their defense constantly tried to run him and his teammates off the 3-point line, and for most of the night it was successful: Golden State missed its first seven shots from beyond the arc before Curry finally ended the streak early in a 12-0 run that gave the Warriors a 39-36 lead midway through the second quarter.

It didn’t last long in this back-and-forth game in which Indiana led most of the way.

But Curry started heating up in the third quarter with his fourth 3 of the night to give Golden State a 79-78 lead. Indiana answered by closing the quarter on a 7-2 run and taking an 84-80 lead. The Pacers led the entire fourth — until Curry’s flurry followed by Looney’s decisive basket.

Curry finished the night with 26 points, 6 rebounds and 6 assists.

The Warriors make their third stop on a five-game trip Tuesday at the Knicks.