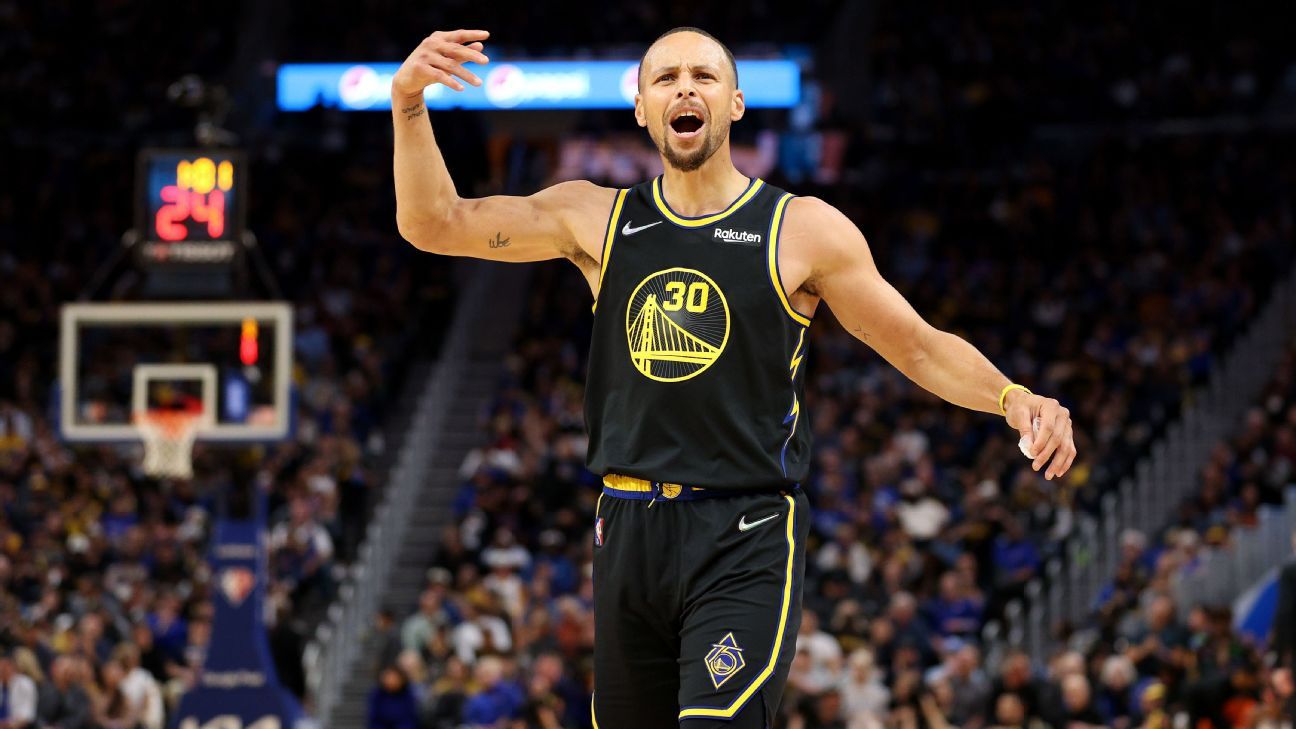 SAN FRANCISCO — The Golden State Warriors have a long-standing history of small-ball lineups. During the first championship run of their dynastic era, their small lineup was so lethal it was dubbed the “death lineup.”

It has gone through a few different renditions since then, but as the Warriors embark on their first playoff run in two years, it appears they have the newest version.

Stephen Curry, Klay Thompson, Jordan Poole, Draymond Green and Andrew Wiggins played just five minutes together in Game 1 of their first-round series against the Denver Nuggets, but in those minutes, they outscored the Nuggets by 14 points. And it was those five minutes that shifted the momentum toward the Warriors going into halftime of Saturday night’s eventual 123-107 win.

“It’s a scary sight when we really get going,” Thompson said. “This is really only our first time really playing together.”

Poole has been peppering his veteran teammates with questions about the playoffs for the past three years. He wanted to be ready whenever his chance to perform on the NBA’s biggest stage came. But according to Warriors coach Steve Kerr, it’s not just his questions that prepared the third-year guard. Their two play-in games last year gave Poole a taste of the pressure he’d face during their run this season.

“He’s not afraid of the moment,” Kerr said of Poole. “He’s looking forward to it.”

Curry singled out a play that occurred with about three minutes left in the first half, when Poole came in transition and cut back and forth through the key for a layup.

“He doesn’t lack confidence,” Curry said. “That play embodied it. Because you just have the creativity and confidence in yourself to make that play. You don’t second-guess yourself. You kind of live with the results and we’ve done it for years and he’s stepping into that not. It’s fun to see.”

Poole finished the night with a game-high 30 points on 9-of-13 shooting, including 5-of-7 from 3. Only one player in Warriors history scored more points in his playoff debut: Wilt Chamberlain (35 points).

On Friday, Nuggets coach Michael Malone said not to check Poole’s statistics against Denver during the regular season because “they were just off the charts.” In the three games he played against the Nuggets, Poole averaged 22.7 points, 58% shooting from the field and 61% shooting from the 3-point line.

Curry said that Poole’s play as of late — he has hit a league-best 78 3-pointers since March — is a reason he is comfortable easing his way back into his own play more slowly.

Saturday’s outing was the first time Curry had played a game since March 16, and he came in off the bench.

It was Curry’s decision not to start. He said that watching Thompson come back from his injuries — particularly the way the Warriors would allow Thompson to get 45 minutes of rest in real time before he returned to the floor — gave Curry insight into how to manage his minutes restriction. But it also gave the Warriors the flexibility they wanted within the limits of his minute restriction.

“I thought he looked great,” Thompson said. “His shot was short in the first half, but that’s to be expected when you come off a long layoff. But he’s still Steph Curry. … Just his gravity and the threat of him being out there is the best. It makes us a championship team.”

As Thompson said, Curry’s biggest impact on the game was simply his presence on the court. It forced the Nuggets to decide if they wanted to leave him in single coverage, which could have led him to catch fire, or they could throw multiple defenders his way, leaving another capable shooter wide open.

“It’s really hard to guard us,” Thompson said. “Technically, I guess, we are undersized, but you have to bring a defensive force and effort and energy.”

Added Curry: “Seeing [Poole] be able to make plays in the pick-and-roll with me and Klay spaced and Draymond setting and Wiggs splashing, it checks a lot of boxes on the list of like what would you want for a potent offense.”

The spacing Curry created was especially apparent playing in the Warriors’ three-guard lineup with Poole and Thompson. Thompson finished with 19 points on 7-of-15 shooting, including five 3-pointers.

Green did not play in any of the four regular-season matchups against Denver, and Malone cited that as a reason why the Nuggets went 3-1 in the series.

The Nuggets went shot just 5-of-19 from the floor when Green was the primary defender. Nikola Jokic went 3-of-12. On offense, the Warriors finished 9-of-14 on field goals off Green’s passes, including 5-of-6 on uncontested shots.

“You need tough and smart, and that’s Draymond,” Kerr said.

“He stepped it up a notch,” Poole said. “Him being our leader, we feed off his energy and being able to see head honcho go out there, be aggressive, knock down huge stops against the MVP, we feed off that. Being able to have the force that he is back there, and the way he controls our offense helps a lot.”

The Warriors only got a five-minute glimpse of their potential lethal closing lineup. But, in those five minutes, Golden State could finally see the lineup it has been talking about since Curry went down in March. It’s been in their playbook for longer — for nearly a decade.

It has seen players rotate out, such as Harrison Barnes and Kevin Durant, but at the end of the day, it will always be a key for the Warriors in the playoffs.

As for a new nickname for it?

“No,” Curry said. “See, it’s hard to keep doing it over and over again. Hard stuff we all must do.”