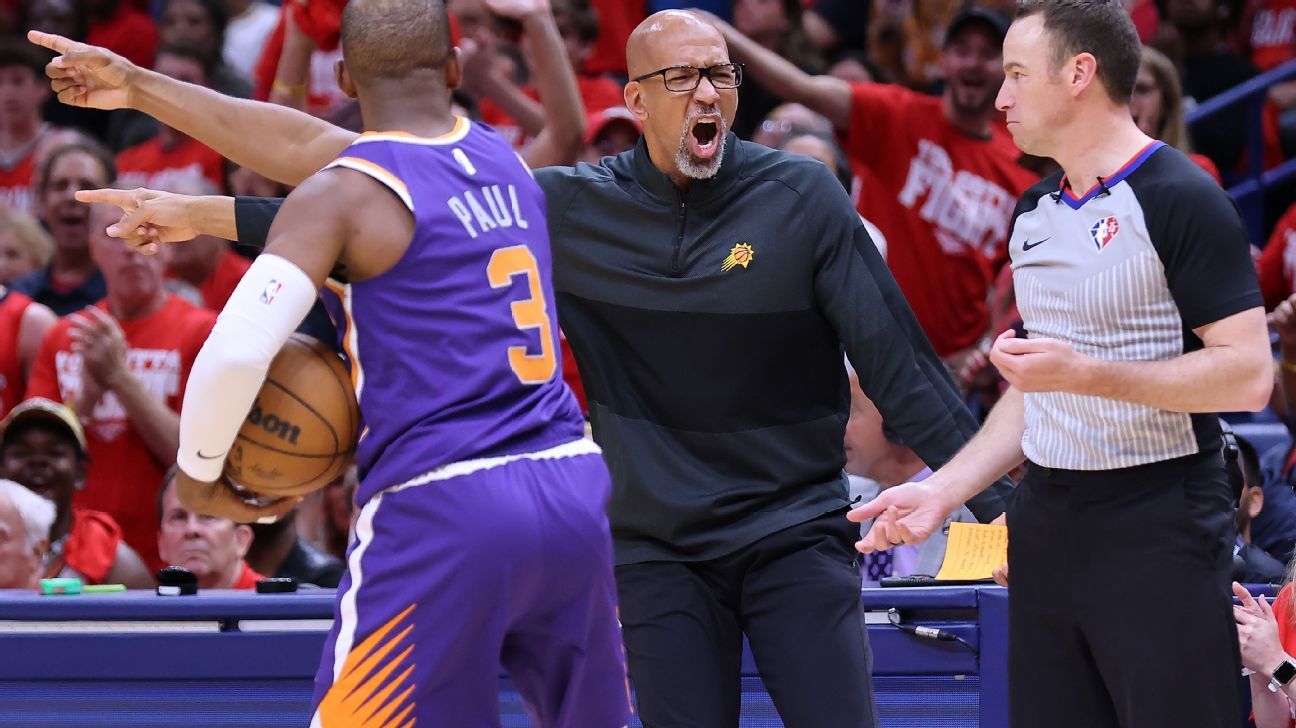 NEW ORLEANS — Normally low-key by design, Phoenix Suns coach Monty Williams had cutting remarks about the officiating after the New Orleans Pelicans took Game 4 on Sunday to even the first-round series at 2-2.

The Pelicans shot 42 free throws to the Suns’ 15 and it was a 17-2 disparity in the first half. The Suns were called for 12 more fouls in what was a classic physical playoff game.

“You can slice it any way you want to,” Wiliams said. “In a playoff game that physical, [the disparity] is amazing. Coaches shouldn’t have to come up to the microphone and feel like they’re going to get their heads cut off for speaking the truth.”

It was in the Pelicans’ game plan to test the Suns’ interior, and Brandon Ingram and Jonas Valanciunas combined to shoot 21 free throws. Ingram finished with 30 points, the first Pelicans player in team history to score 30 or more in three consecutive playoff games. Valanciunas rebounded from a poor showing in Game 3 to put up 26 points with 15 rebounds.

The Pelicans took 46 shots in the paint, but the Suns took 41 themselves. Chris Paul didn’t go to the line after going 14 times the first three games. He went scoreless in the fourth quarter, where he had been dominant in the series, and tied his career playoff low with just 4 points.

“It’s not like we don’t attack the basket,” Williams said. “They outplayed us, they deserve to win. That’s a free throw disparity that you have to look at … it’s hard [to] swallow.”

Said Paul: “It’s like the old NBA, isn’t it? I asked one of the refs one time, ‘Are we playing in the old NBA or the new NBA?’ I was fortunate enough to play in both of them, we just have to figure out which one it’s going to be.”

Pelicans coach Willie Green said his team had the mindset of wanting to get into the paint and to the free throw line.

“We were being aggressive. … They dominated the paint last game,” Green said. “Had 64 points in the paint. So we were well aware that we had to do better in that area.”

The Pelicans altered their late-game strategy against Paul; instead of relying on a switching strategy to deny him drives that had largely failed in the series, Green instructed his team to trap Paul in the fourth. Paul had four of his 11 assists in the fourth, but forcing the ball out of his hands clearly was effective.

“I was tired of hearing about him breaking records during the fourth quarter,” Pelicans guard CJ McCollum said. “It’s just a credit to our defense. Especially our intensity. But also, it’s a make-or-miss league. He is not going to make every shot. But some nights, he is going to make a lot of tough ones. Tonight, he missed some shots he made the last three games. Credit our defense. But it’s a make-or-miss league.”

Jose Alvarado, the undrafted rookie guard who has already developed a reputation as a defensive pest, appeared to unnerve Paul with his full-court pressure defense. Alvarado forced Paul into an 8-second violation and had two steals.

The normally in control and fourth-quarter master Paul lost his cool several times out of frustration. He committed a flagrant foul on Herb Jones, who played great defense all night with three blocks and two steals, and then was hit with a technical foul. Alvarado later goaded Aaron Holiday into a technical foul as well, as the crowd in the Smoothie King Center chanted the rhythmic “Jose, Jose, Jose” to the famous “ole, ole, ole” melody.

“He’s a good kid who plays hard,” Paul said of Alvarado. “He’s a really good energy guy. I’ll be better next game, I’ve got to be.”

The Suns were without star Devin Booker for a second consecutive game as he works back from a hamstring injury suffered in Game 2 last week. Booker is progressing in his recovery but there is no official timetable for his return.

Without Booker, the Suns’ offense has cratered. After going 4-of-26 on 3-pointers in a narrow Game 3 victory last Friday, they went just 7-of-27 on Sunday. Booker’s replacement in the starting lineup, Cam Johnson, is just 6-of-19 shooting in the two games.

“We can’t worry about [Booker],” Williams said. “Obviously we need Book back but that’s not why we lost the game.”