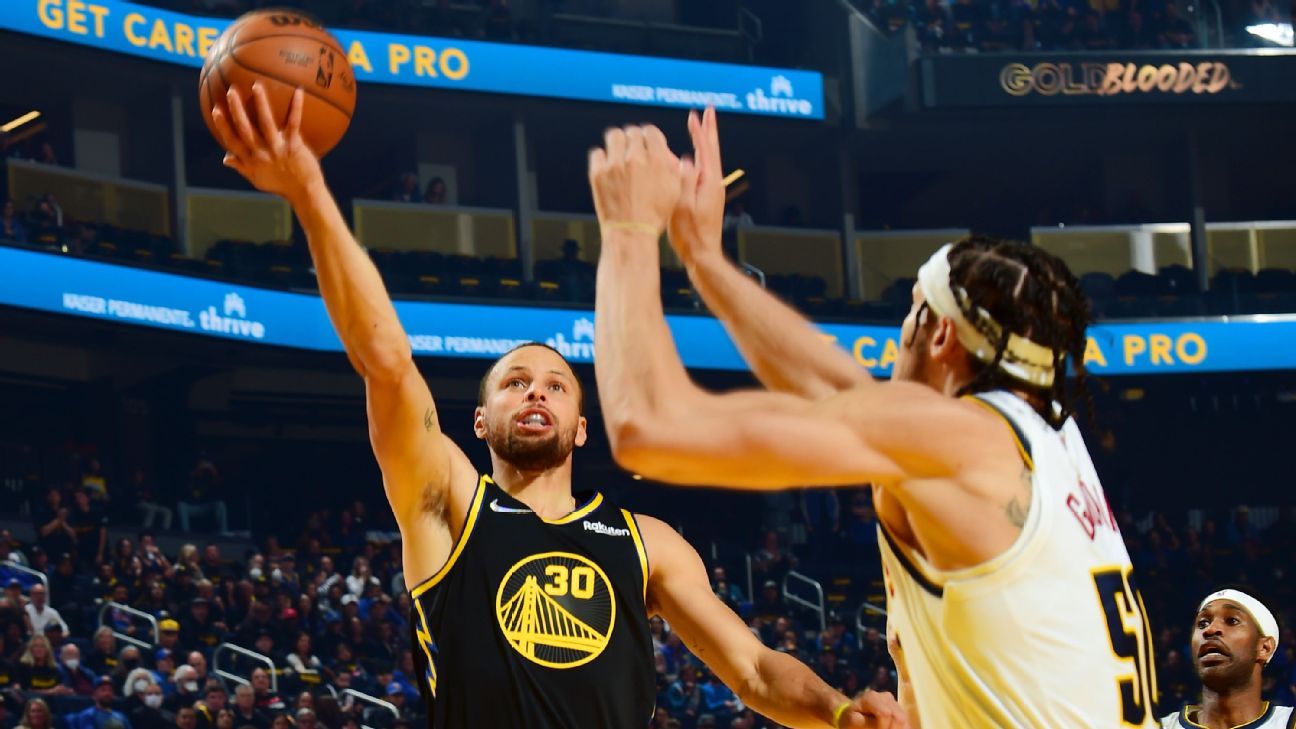 SAN FRANCISCO — Stephen Curry dribbled through nearly the entire Denver Nuggets team before putting up the perfect tear-drop layup to put the Warriors up with 30 seconds left in the game Wednesday night. As he came down the court, he looked at the audience and clasped his hands under one side of his head, signaling to the Nuggets that it was time to go to sleep.

Curry’s bucket was the dagger that ended the Nuggets’ season and propelled the Warriors to the 102-98 victory, punching Golden State’s ticket to the Western Conference semifinals. The Warriors advance to face the winner of the Timberwolves-Grizzlies series, with Game 1 happening as soon as Sunday. Memphis has a 3-2 series lead over Minnesota going into Game 6 on Friday night.

For the first 30 minutes Wednesday night against the Nuggets, the Warriors looked lifeless, and Chase Center was nearly dead. The uncertain and nervous energy was palpable.

At the 6:20 mark of the third quarter, Draymond Green hit a 26-foot 3-pointer to bring the Warriors within six of the Nuggets. It gave them their initial push to breathe life back into themselves and the building. Then the fourth quarter is when they really came alive.

The Warriors finally found an offensive rhythm, while also slowing the Nuggets on the other end. Nikola Jokic got into foul trouble — picking up his fifth personal just seconds after checking into the quarter — aiding the Warriors.

Curry led all scorers with 30 points on 10-of-22 shooting, including five 3-pointers in 38 minutes.

Game 5 was Curry’s first start of the postseason, also making in the first time the Warriors’ newfound lethal small-ball lineup was the starting unit. The unit’s first stint lasted just three and a half minutes before Kevon Looney checked in for Jordan Poole. But because of early fouling, the Warriors didn’t go back to that combination much.

Klay Thompson added 15 points, while Draymond Green had 11 points, six assists, three blocks and a steal. Gary Payton II provided an instrumental boost off the bench, playing his patented defense and scoring 15 points on 6-of-8 shooting, including a wide-open 3 to give the Warriors a much-needed 86-84 lead as they entered the final stretch of the game. He hit another 3 to put the Warriors up with just under a minute left in the game.

After two blowout games in Games 1 and 2, and two competitive ones in Denver — one win and one loss — all the Warriors had to do was tie the bow on their first-round series against the Nuggets in Chase Center’s first closeout game.

Thompson went as far as to say Game 5 was a must-win game. Not in the sense that it was win-or-go-home, but in a way that was clear they couldn’t give this Nuggets team, which has made two improbable playoff comebacks before, any more life and go back to Denver.

The Warriors let them stick around more than they wanted to in Game 5, but ultimately, they achieved their goal.

The Clippers are committed to the Kawhi experience — for better or worse
Sources: AD expected back Monday vs. Pacers
‘Getting boring’ jokes Kidd after Luka’s latest feat
3 moves the Golden State Warriors can make to turn their season around
Will the Indiana Pacers be buyers or sellers at the NBA trade deadline?