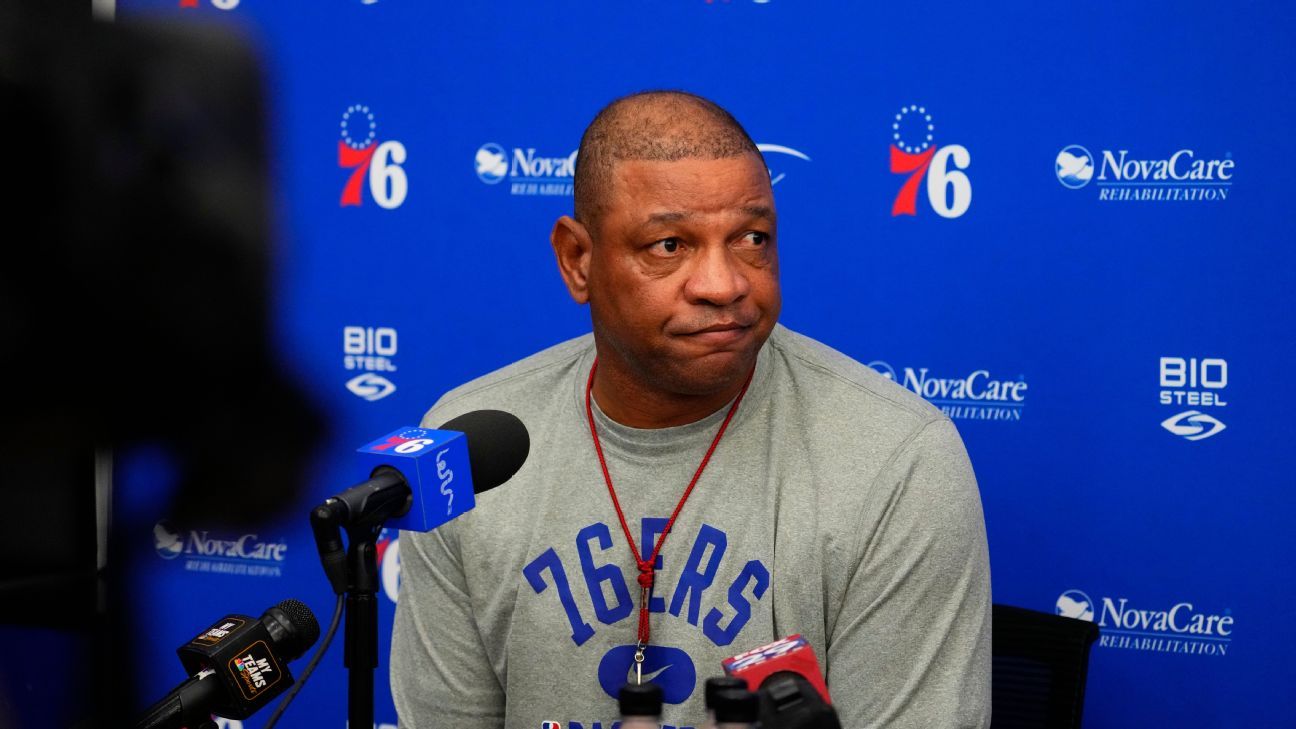 MIAMI — After dropping their first two games on the shores of Biscayne Bay to open up this Eastern Conference semifinal against the Heat without superstar big man Joel Embiid, one question looms over the Philadelphia 76ers as the series shifts back to the City of Brotherly Love for Game 3 Friday night:

Will Embiid be able to play in Game 3?

“I really don’t know,” 76ers coach Doc Rivers said after Wednesday night’s 119-103 loss to Miami in Game 2, which Philadelphia once again played without Embiid due to the facial fracture and concussion he suffered against the Toronto Raptors last week. “We talked [Tuesday], and we talked [Wednesday].

“He looked good, as far as talking. But he’s got so many steps to go through, and I don’t think he’s cleared any of them right now. So we just have to wait and see.”

Without Embiid, Philadelphia was once again overwhelmed in Game 2. Miami dominated the paint, outrebounding Philadelphia 44-34 and getting 21 second chance points.

“I liked the shots tonight,” Rivers said. “We had some wide-open looks.

The Heat, for their part, bounced back from their own rough shooting performance in Game 1 to go 14-for-29 in Game 2.

Like in Game 1, Philadelphia found ways to hang around even without its superstar center for much of this game. Tyrese Maxey exploded for 34 points, constantly breaking out in transition or slicing through Miami’s defense to the rim. Tobias Harris had yet another strong two-way performance, finishing with 21 points, four rebounds, four assists and four steals.

James Harden also played better, finishing with 20 points and nine assists, as he continues to see the same kind of massive attention being paid to him that the Heat gave to Hawks star Trae Young in the first round.

“They did a really good job of putting two on the ball and trying to deny me basically the entire court, so it was giving our guys more space to be aggressive if they’re going to deny my wherever I am on the court.

“Give them credit. But I feel like, if we make shots, and I keep saying that, but it opens up the floor a little bit more, and you have to respect our shooters now.”

Something else would divert more attention away from Harden: Embiid getting back on the court.

And while Rivers wouldn’t say whether Embiid would return, the Heat certainly expect to see the finalist for the NBA’s Most Valuable Player award for a second straight season take the floor in Game 3.

“It changes dramatically,” Heat coach Erik Spoelstra said, when asked what Embiid’s return would mean for the series. “You’re talking about MVP talent, you know? So we’ll just have to see.

The question now, though, is not only whether Embiid will be able to play in Game 3 – but whether his return will be enough to tilt this series back in Philadelphia’s favor. Georges Niang was favoring his knee in Game 2, and Rivers admitted he’s been playing at less than 100 percent for “some time now.”

Matisse Thybulle, who was a part-time participant in Philadelphia’s first round series in Toronto because he didn’t meet Canada’s vaccine requirements, has looked lost offensively. Danny Green is now 2-for-14 from 3-point range in the series.

Embiid’s presence would certainly help take some of the pressure off his teammates, and would clearly give Harden more room to operate. But it is far from assured he’ll be back at 100 percent even if he is able to return.

“If Joel’s back that’s great,” Maxey said. “If he’s not back then you just got to keep fighting. It’s a fight. It’s gonna be a fight again on Friday. I think [one thing] that we take away from [these games] is go at them. Attack them. Don’t dance, don’t play with the ball in front of guys. Go right at them, go downhill and then once they help spray it out to our shooters or finish over the top.”

Whether Embiid is on the court or not, though, Rivers said his team will be prepared to fight to get back into the series in front of its home crowd Friday night.

“That’s what the film is for, and that’s what adjustments are for,” Rivers said.