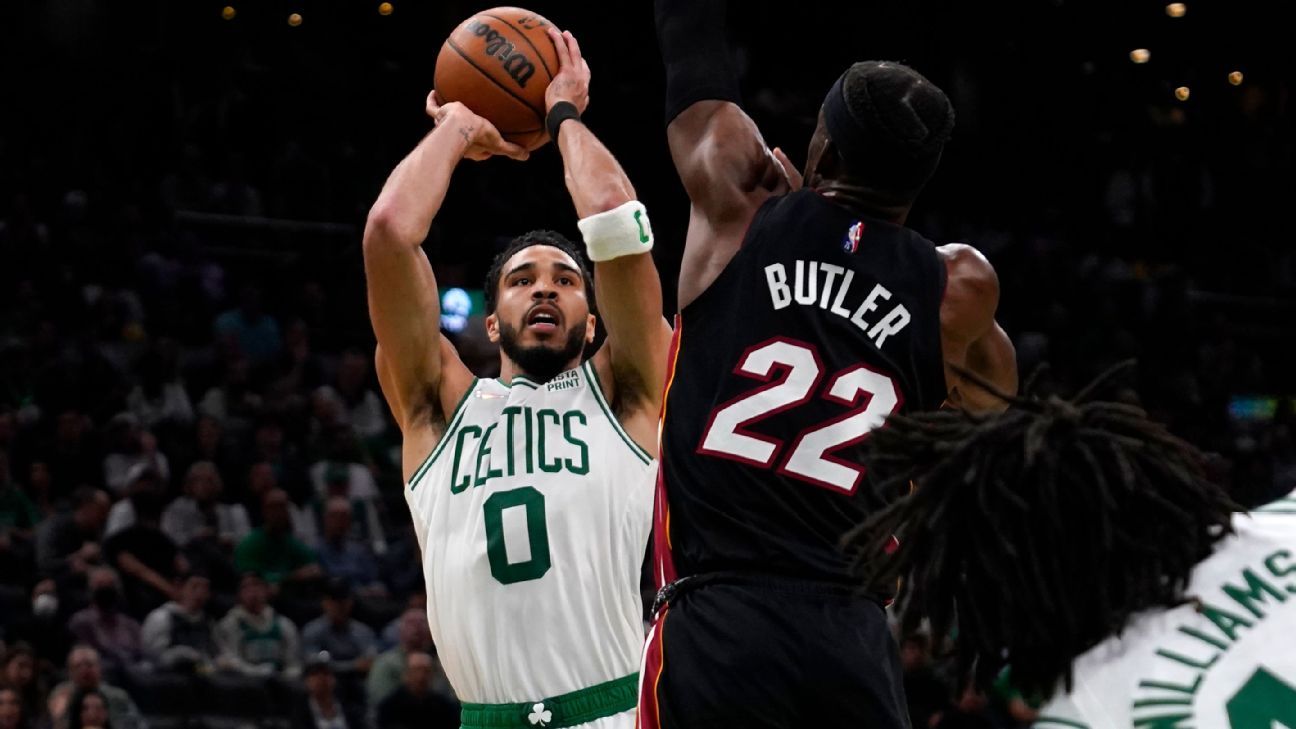 BOSTON — When things have gone poorly for the Boston Celtics in the Eastern Conference finals, it’s been when they’ve lost focus and allowed the Heat to speed them up and turn them over, leading to fast break points — the one consistent way Miami has scored in this series.

That was the formula Miami used to fuel its victories in Games 1 and 3. And so, heading into Game 4, Boston knew that in order to even this series at two wins apiece, it would have to avoid falling into those same bad habits once again.

The Celtics were utterly dominant at both ends from start to finish, as Boston scored the first eight points and never looked back, cruising to a wire-to-wire 102-82 victory in front of a sellout crowd at TD Garden to send this series back to the shores of Biscayne Bay for Game 5 on Wednesday, with both teams two wins away a trip to the NBA Finals.

“Urgency,” Jayson Tatum said after leading all scorers with 31 points, when asked to describe Boston’s mindset entering Game 4. “That was a focal point coming into this game, to just have a sense of urgency on both ends of the floor, from start to finish. Really starting the game better obviously than we did last game. That’s something that we talked about and something that we executed tonight.”

In a series that has seen each game swing wildly from one direction to the other, it took about 10 seconds to realize Game 4 would follow a similar pattern. Boston immediately jumped out to an 8-0 lead before Miami scored a single point, and eventually took an 18-1 lead before the Heat finally made their first field goal with 3:22 remaining in the first quarter when Victor Oladipo buried a 3-pointer.

By then, Miami had missed 14 consecutive shots to open the game, setting a tone for all that was to come over the final 40 minutes. The Heat simply never got out of first gear, as Boston — even without the NBA’s reigning Defensive Player of the Year, Marcus Smart — smothered Miami’s starters into an abysmal combined 7-for-36 shooting performance, including going 1-for-10 from 3-point range.

In a summation of Boston’s dominance, Tatum, who is now averaging 32.6 points per game during these playoffs following a loss, outscored Miami’s starters by 13 points by himself.

“For everybody, the focus was great tonight,” Celtics coach Ime Udoka said. “We understood we have to be more aggressive and physical on the defensive end.”

“Nobody scored in double figures with their starters … I think we obviously set the tone right there. But we have a prideful team, one of the best defensive teams in the league as well as individuals, and they heard some of the things that were said and took pride in those matchups.”

A big part of those struggles was Jimmy Butler once again having a rough night. Even without Smart out there to hound him, Butler — who was dominant through the first two games, like he has been for virtually all of Miami’s playoff run — again looked off after sitting out the second half of Game 3, going 3-for-14 in 27 minutes and failing to even attempt a free throw.

Similarly, Bam Adebayo — who went from scoring a combined 16 points in Games 1 and 2 to exploding for 31 in Game 3 — again disappeared in Game 4, taking just five field goal attempts and recording nine points.

“Covering for each other, being in our spots, being where we were supposed to be,” Celtics center Robert Williams, who returned after missing Game 3 with knee soreness, said in explaining what changed for Boston from Game 3 to 4 defensively. “Last game, even though I didn’t play, I noticed the slip-ups that we had on the defensive end, and that’s where we hang our hat at.

“As far as energy-wise, the loss played a big part of the energy going into this game.”

The Celtics, meanwhile, played like the desperate team from the jump — helping themselves improve to 5-0 coming off of losses in these playoffs as a result. Derrick White, who said after the team’s morning shootaround that he was determined to be more aggressive, scored 5 points on Boston’s first two possessions and hit the team’s first three shots, while Horford stripped Adebayo on the opening defensive possession of the game.

After listlessly stumbling through the opening 12 minutes of Game 3, falling behind 39-18 and leaving themselves with a hole that proved just too big for them to dig themselves out of, this time it was the Celtics who opened up the 29-11 lead after one.

And, unlike in Game 3, Miami had no ability to make things even remotely competitive, as the Celtics remained firmly in control right until the game’s final buzzer.

“It was extremely nice — especially because we were winning,” Tatum said with a smile of spending most of the fourth quarter on the bench watching Boston’s reserves close things out.

Now, the focus for the Celtics is to try to bring the same sense of urgency that fueled them in Game 4 — and after each of their losses in these playoffs, all of which have been followed by wins — to Game 5. Boston has not handled prosperity well against either the Milwaukee Bucks in the Eastern Conference semifinals, or against the Heat in this round.

The Celtics know that in order to advance to the NBA Finals, they’ll have to win another game in Miami – and they know that keeping that same focus they had in Game 4 will be the thing that determines whether they can do so.

“It’s kind of like a new series, best of three,” Tatum said. “I think just having a conversation that I think human nature plays a part in, when you win a game you can relax a little bit, but obviously when we lose a game, we feel like the next game is do or die, and then we come out and play like we did and things like that.

“I think we have to have that mindset going into Game 5, that it is a must-win game, because tonight was essentially something like that. Everybody knew it. We could all feel it. I think that showed in the way we came out.”