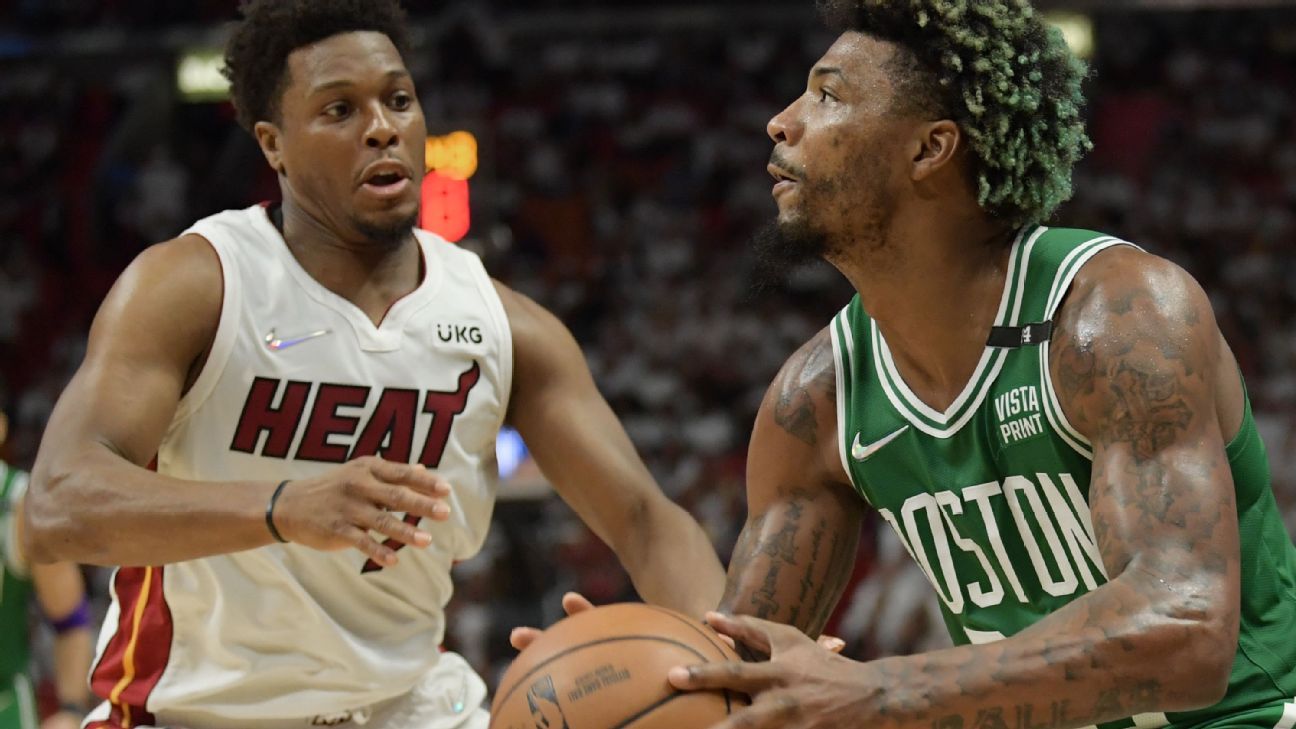 MIAMI — Nothing about this Boston Celtics season has been easy. So, it stands to reason, making it to the NBA Finals wouldn’t be, either.

But, at the end of a grueling seven-game series in the Eastern Conference Finals against the Miami Heat, that is exactly where the Celtics have returned to once again.

Behind a pair of terrific games from Jayson Tatum and Jaylen Brown, Boston won its third game at FTX Arena in this series, escaping with a 100-96 victory over the Heat in front of a sellout crowd that was thrilled by the exploits of the home team right to the game’s dying moments.

Ultimately, though, it wasn’t enough to prevent Boston from taking revenge on Miami winning this matchup two years ago. And, with the win, the Celtics advanced to the NBA Finals for the first time in 12 years, where they’ll face the Golden State Warriors. The series will begin Thursday night at 9pm Eastern on ABC at Chase Center in San Francisco.

Getting there, though, was excruciating – right down to nearly blowing a 7-point lead with a minute to play. But, after Boston made one mistake after another in that final minute, including Jaylen Brown being called for a charge, Marcus Smart flinging up a contested miss and Max Strus burying a 3-pointer to pull Miami to within 2 with 44 seconds to go, Jimmy Butler — who had an otherwordly series, including an all-time great performance in Game 6 — pulled up for a 3-pointer on the break with a chance to take the lead with 17 seconds that every soul in this building not wearing green thought was going in.

But, it didn’t. And, after Smart hit a couple of free throws with 11.4 seconds to go, Boston managed to just escape with its season still alive, and a trip to San Francisco and a date with the Warriors on the agenda.

At every turn, the Celtics have made things as difficult for themselves as possible – and that’s not even considering the fact that, as deep into the season as late January, it would’ve been unthinkable for Boston to be in this position. After a loss at TD Garden to the Portland Trail Blazers on Jan. 21, the Celtics were 23-24, had been playing .500 basketball for more than a season-and-a-half, and had an offense ranked among the bottom 10 in the NBA.

“We weren’t even thinking that far down the road honestly,” Celtics coach Ime Udoka said before Game 6. “We were thinking about getting healthy, understanding the system we were trying to put in place. We always had glimpses of success … we did see good things early on at times.

“We played really good against the big teams. We had some poor losses against some of the lesser teams. For the most part we were competing against the best teams. That boded well for the future.”

No one, however, would’ve envisioned what was about to happen. From that Portland loss through the end of the regular season, Boston was the NBA’s best team. It posted a record of 28-7, and had the NBA’s best offensive rating and defensive rating by significant margins. Boston’s net rating was a staggering plus 15.5 points per 100 possessions — almost double the Memphis Grizzlies (8.1) in second.

That allowed Boston to go from a team that was simply trying to stay in the NBA’s play-in tournament spots to one that finished the season as the No. 2 seed in the Eastern Conference. From there, the Celtics swept the Brooklyn Nets and survived a seven-game slugfest with Giannis Antetokounmpo and the defending NBA champion Milwaukee Bucks to make it to a sixth Eastern Conference finals in the past 11 seasons.

“I think we finally flipped the script, got healthy at the right time, and here we are,” Udoka said.

“Here” was in the Eastern Conference Finals against the Heat, a team that has grown to reach the level of the Los Angeles Lakers and Philadelphia 76ers in this historic franchise’s pantheon of foes. It’s the fifth time in 13 years the two teams have played in the playoffs — including the third time in the East Finals.

In what was a topsy-turvy series that, heading into Game 7, saw each team win on the other team’s home court twice through the first six games, with Boston controlling Games 2 and 5 here at FTX Arena while the Heat had impressive closing stretches to win Games 3 and 6 at TD Garden.

But, unlike two years ago, when these teams met in the Eastern Conference finals inside the NBA’s bubble at the Walt Disney World Resorts and Miami emerged victorious in six games, this time it was the Celtics who escaped with their season alive after being pushed to the absolute brink by the Heat – thanks to some truly incandescent performances by Heat star Jimmy Butler, led by his 47-point, 9-rebound, 8-assist masterpiece in Game 6 to send this series back here for a do-or-die Game 7.

After Miami got off to a strong start on the road in Game 6, Boston turned the tables in Game 7. The Celtics held the Heat without the field goal for more than three minutes to start the game, and leapt out to a 20-7 advantage halfway through the first quarter on a straightaway 3-pointer from Jayson Tatum. Boston then closed the quarter with another 8-2 run, after Miami had gotten back to within 9, to give the Celtics a 32-17 lead after 1.

From there, Boston continued to employ the strategy that, when this team has played well in this series, has allowed it to repeatedly throttle the Heat: by playing suffocating defense at one end, and not turning the ball over at the other. In particular, when Boston took care of the ball in this series, things went very well for the Celtics. And, in this one, Boston took care of the ball.

In opening up that early lead, the Celtics only committed two first quarter turnovers. And, as they kept playing crisp basketball, they were able to maintain their advantage, even while Jimmy Butler had his latest fantastic performance in these playoffs just to keep Miami within contact.

Unfortunately for Butler, he couldn’t find anyone but Bam Adebayo to come along for the ride. In the first half, Heat players not named Butler or Adebayo were a combined 3-for-16 from the field.

Still, after Derrick White hit a 3-pointer with 4:30 to go in the half and Boston up 50-34, the Heat closed the half on a 15-5 run — including drawing three on-the-floor fouls with Boston in the bonus inside the final minute of the half that became five free points — to pull to within 55-49 at the halftime break.

It was a flattering scoreline for the Heat, given the struggles of everyone around Butler. But it had the home crowd celebrating, and breathed life into a Miami team that, earlier in the half, felt like it was hanging on by the slimmest of threads.

But, like in the first half, the Celtics were the ones to start things off well in the third. After Miami kept Boston at a bogged down pace in the second quarter, the Celtics sped the game back up in the third, and prospered as a result.

Yet, despite Boston again controlling play for most of the quarter, by the end of it, the score had hardly changed, as the Celtics took a 7-point lead into the fourth quarter thanks to Adebayo and Butler continuing to excel.

And, when the Heat opened the fourth quarter with a pair of baskets to close the deficit to 82-79, Celtics coach Ime Udoka called a quick timeout with 10 minutes, 56 seconds remaining and the entire crowd standing and chanting.

But, when the teams came back onto the court after that timeout, the Celtics used their defense to, once again, take the life out of the building. For more than four minutes, the Heat went without a single point, as Boston scored eight straight to push the lead back to double-digits once again.

And the Heat, while continuing to fight valiantly, simply ran out of gas, becoming the latest team to be slowly ground down by the physicality of the Celtics over the course of a 7-game series.

But only by the slimmest of margins.