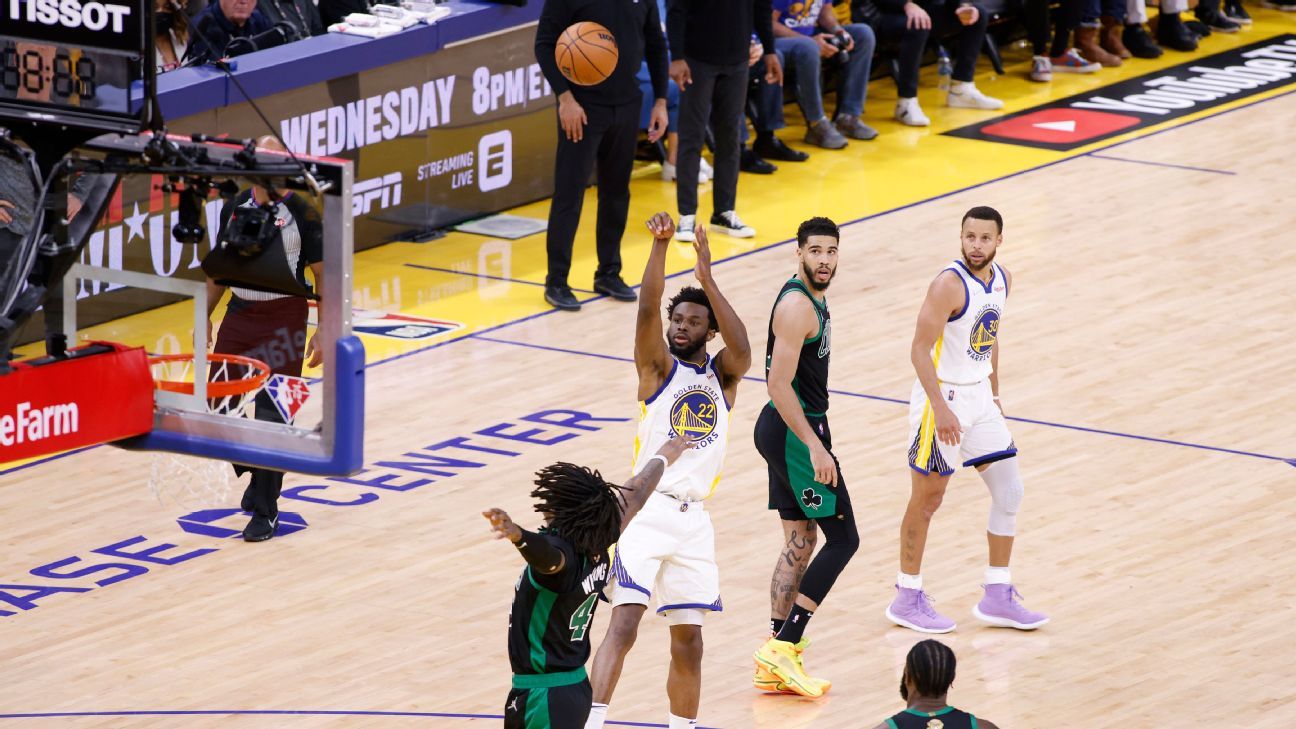 SAN FRANCISCO — Andrew Wiggins has been waiting his entire career for a moment to shine on the NBA Finals stage.

An eight-year veteran, he hadn’t yet had the opportunity. But now that he’s here, he is taking advantage.

Wiggins led the Warriors to their 104-94 victory over the Boston Celtics in Monday night’s Game 5, finishing with 26 points on 12-of-23 shooting, 13 rebounds, two steals, two assists and one block as Golden State took a 3-2 series lead.

“We knew we needed his athleticism and defense and his versatility. We had no idea that he would make this kind of contribution,” Warriors coach Steve Kerr said. “But I think it’s a reminder that for every — almost every player in the NBA, circumstances are everything. You kind of need to find the right place, the right teammates, that kind of stuff. Wiggs has been a great fit.”

Since the Warriors’ Game 4 win in Boston, the discourse surrounding the team has largely been about how Golden State needed to support superstar Stephen Curry.

On a night when Curry scored just 16 points and failed to hit a single 3-pointer, Wiggins provided the relief in Game 5.

His 26 points are the second most he has scored this postseason. He tallied 20 paint points, tying his postseason high. It marked the first time Wiggins has led the Warriors in scoring and rebounding all season (playoffs and regular season), and it is the first time he has recorded back-to-back double-doubles.

“I mean, buying in is one of the biggest keys to success in this league, and for what Andrew did tonight, I mean, we don’t get — we don’t get more excited than when Wiggs dunks on somebody,” Klay Thompson said. “And that really uplifts the whole team and the Bay Area.”

According to Draymond Green, the trust to look to Wiggins in those moments, the ones when the team needs any kind of spark, has been building since Wiggins arrived nearly two years ago in a trade that stemmed off the departure of Kevin Durant.

“A lot of people looked at that trade like, oh, that’s another piece they can move,” Green said. “We looked at the trade from the very beginning like that is a guy who can fit next to a healthy group absolutely well. … He’s continued to show that. He’s continued to get better. He’s taken on every challenge that we have thrown in front of him. And that’s been huge. And we need him to do that for one more win.”

In Wiggins’ eyes, fitting into Golden State is easy.

“I feel like being here, it’s a winning culture,” he said. “They have won before, and they have dominated the NBA. When I got here, they put you in position to succeed. They always bring out the best in you. They want the best for you. You know, supportive.”

Wiggins’ fit with the Warriors has been consistently discussed throughout the season. It’s been made clear that his role with the Warriors — not always needing to be the No. 1 scoring option and being someone who can take on top defensive assignments — has led to his emergence.

Then there are nights such as Monday when he doesn’t mind taking on the aggressive scoring role.

But Wiggins’ impact stretched far beyond his scoring. Once again taking on the opponent’s best scorer, Wiggins also led the Warriors’ defensive efforts, holding Boston to 7-of-16 shooting in Game 5.

“The key to our game is defense,” Kerr said. In addition to Wiggins, Kerr named Green and Gary Payton II as central figures on that end of the floor.

Despite becoming the first player to foul out of a Finals game since 2000, Green held the Celtics to just 1-of-10 shooting when he was the contesting defender. Jaylen Brown went 1-of-6 with Green on him.

“That’s a guy I’ve been watching for eight years,” Kerr said. “He’s always all over the place defensively. He’s distributing the ball. He’s bringing that intensity and competitiveness and energy. I thought Draymond was brilliant.”

In addition to his defense, Green scored eight points, but more importantly, he walked the line of being aggressive and demonstrative without it getting to the point of distraction. Finding this balance had been an issue for Green so far in this series.

“In a situation like this series where things are not as smooth and you have some rough patches, he finds a way to respond with the right energy and approach and toughness that, if you’re watching the game, you notice him at all times because he’s kind of everywhere,” Curry said. “We need that grit. We are not in the Finals without him playing at such a high level all year long, the first three series.”

All season long, the Warriors have hung their hats on being a defense-first team — a notion that’s not necessarily obvious because the roster boasts two of the NBA’s best, most dangerous shooters. But the Warriors firmly believe that it’s their defense that leads to their offense.

And they point to players like Wiggins as an example of that.