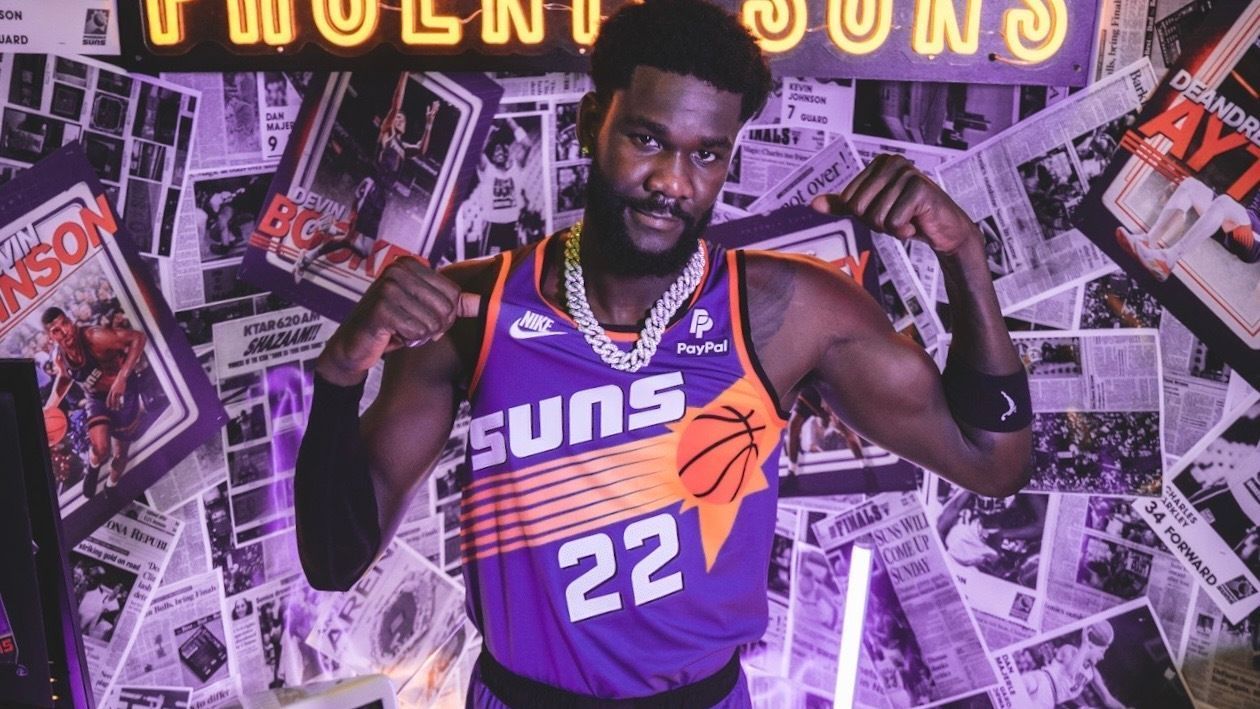 For the first time since the 1990s, the Phoenix Suns are bringing the purple “sunburst” look back to their regular uniform rotation. The look will serve as the team’s Classic Edition uniform throughout the 2022-23 season.

The sunburst uniform, whose 30th anniversary is being celebrated this year, debuted on opening night of the 1992-93 season, which ended with a trip to the NBA Finals. The remake features a more form-fitting and lighter-weight design.

“Everything was new going into that season,” said Mark West, a center for the Suns for eight seasons who now serves as the team’s charity ambassador. “It was impressive, just to have something new. It was really all about the anticipation for the new year.”

After then-general manager Jerry Colangelo fronted a new ownership group that purchased the Suns in 1987, a series of initiatives were launched, culminating with the 1992-93 season.

The team was set to move out of Arizona Veterans Memorial Coliseum and into its new downtown arena, former Suns All-Star Paul Westphal was named head coach and Dream Team power forward Charles Barkley was acquired via trade from the Philadelphia 76ers.

“It was the first season after the Barcelona Olympics with the Dream Team, and the NBA was put on the global map,” said Graham Wincott, the Suns’ senior director of marketing. “[Getting Barkley] really put [the Suns] over the edge, [finishing] with the best record in the league, and he won MVP. It told a lot of the world who the Suns were.”

“Jerry Colangelo really wanted to see a new, clean, modern look,” said Tom Ambrose, former vice president of marketing for the team. “Our old uniforms had a western-style typeface and a sunburst, but it was on the side of the shorts. He wanted a change. He wanted to see some ideas.”

As Ambrose recalls, he kicked off an exploratory jersey design meeting with Colangelo and team executives by first holding out a toy rubber chicken.

“Don’t be chicken,” he joked to the group. “Don’t be afraid of making a change.”

From there, the group glanced through sketches that featured everything from a font-less tank top dominated by a sunburst atop word-heavy shorts, to purple or black looks with the sunburst emanating from a corner of the jersey.

While purple and orange have been the team’s colors since the franchise was founded in 1968, the original redesign pitch to Colangelo also included a wild-card option — overhauling the colors to dark blue and silver.

“That got shot down pretty quickly,” Ambrose said with a laugh. “I’ll be honest. I don’t like the Dallas Cowboys, but I like their uniforms. That’s why I thought, ‘Well, let’s give it a shot, if they want to make that big of a change.'”

Instead, the purple and orange remained, with the sunburst graphic eventually being reversed from a lower-corner placement to a more prominent spot across the chest, as per distinct feedback from Colangelo and Ambrose. The front tank text was switched from “Phoenix” to “Suns” and the jersey number placed under the basketball.

Throughout the 1990s, sizable, sublimated graphics became the NBA norm, whether those were an oversized dinosaur atop the center of the expansion Raptors’ uniforms or a “Big Hawk” dominating the center of a gradient-fading Atlanta jersey.

The Suns were also one of the first teams to opt for the new mesh application process, making for a defining look throughout the decade.

“We loved it,” Ambrose said. “We loved being on the cutting edge. Once we fought through that ‘Well, let’s not change it too much’ feeling that we all had then we said, ‘Let’s go all-in.'”

Before annual alternate jerseys were the norm, the Suns had just two options, and donned their purple sunburst look on 52 road occasions during the 1992-93 regular season and playoffs. According to Wincott, the league now requires teams to wear their Classic Edition for a minimum of four games throughout the season, though the Suns are already planning for far more.

“We’re going to go way beyond that,” Wincott said. “As it stands now, we’re going to wear them for at least a quarter of our home games. Once we see what our road opponents have selected, then we’ll definitely slot it in for some road games too.”

Throughout the course of the season, home games featuring the Classic Edition jersey will also host “an immersive ’90s experience,” according to Wincott, with former players on hand, NBA Jam-themed graphics and music playlists from the era.

While the team only sparingly wore the black version of the sunburst jersey again during the 2012-13 season as a “Hardwood Classics” look, apparel company Mitchell & Ness has often released Suns throwback jerseys featuring former players in each of the original colors, including purple and white as well.

The brand even launched an elevated $400 black version with luxury sportswear designer Don C as part of its “No Name” series in 2018 that removed all lettering from the uniform to focus on the sunburst graphic. Actor Jonah Hill’s casual stroll in the jersey immediately went viral that year.

“We do intend on shipping him another one,” Wincott joked.

In recent years, the Suns’ “Valley” alternate jerseys have become the most popular look since the team overhauled its uniforms in 2000. Wincott said that on the first day the Valley version was available, the team sold more jerseys in one day than it had throughout the prior season. Despite the fanfare, the Suns won’t be wearing the black and gradient-fading Valley jerseys during the 2022-23 season. They are also a fan favorite whenever the team polls supporters about the uniforms.