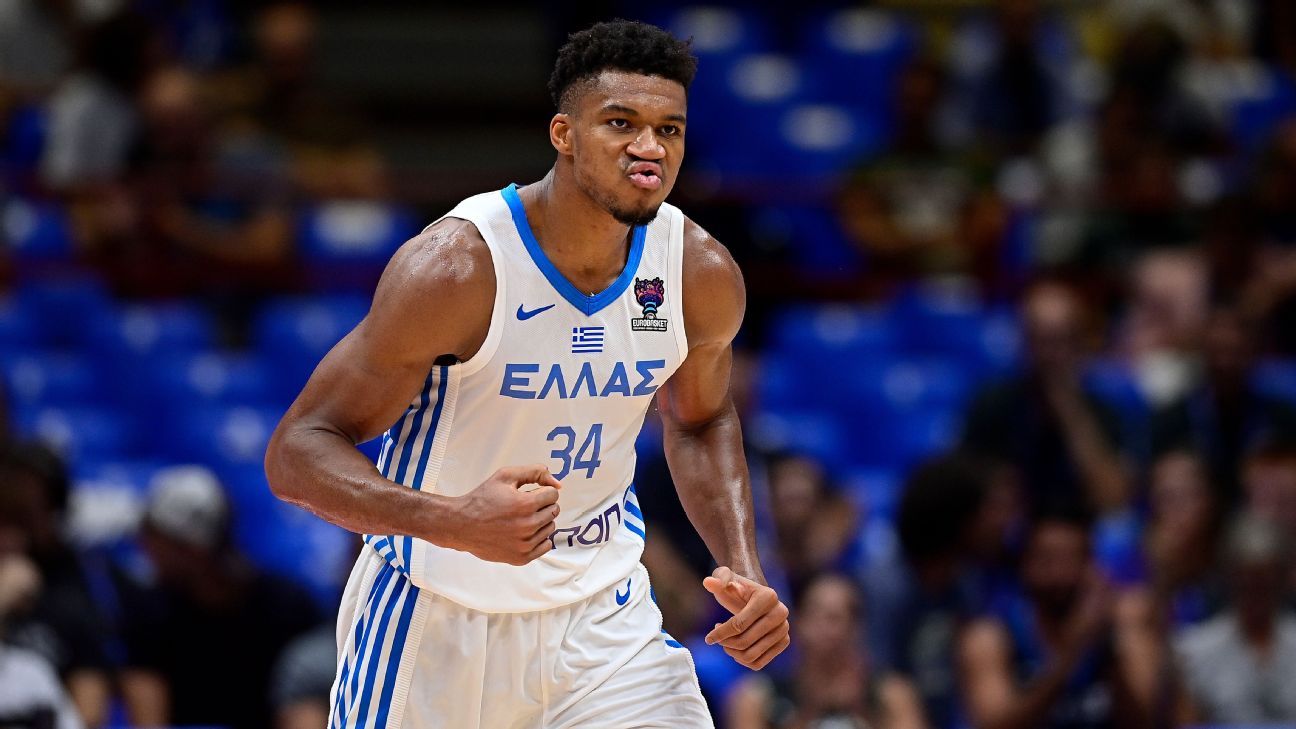 After taking Monday off for rest, Giannis Antetokounmpo simply overpowered Ukraine and ensured that Greece would finish atop Group C.

Antetokounmpo had his 41 points and nine rebounds in just 27 minutes to lead Greece (4-0).

Antetokounmpo’s point total was the most in a EuroBasket game since Dirk Nowitzki had 43 for Germany in 2001. And when he heard that stat, all Antetokounmpo did was nod.

“I try not to rate my performance,” Antetokounmpo said. “I just try to go out there and have fun as much as possible, try to focus as much as I can on what I can control, try to bring energy any way possible. … But I’ll say this: I think this is one of the years where I feel very, very excited to go out there on the court and play with my teammates.”

Nick Calathes and Tyler Dorsey had 13 apiece for Greece.

Issuf Sanon and Svi Mykhailiuk each scored 16 for Ukraine (3-1), while Alex Len and Illya Sydorov added 10 apiece. Ukraine led by seven at the half, before Greece won the third quarter 32-11.

“The whole team was ready,” Doncic said. “Everybody who stepped on the court was fighting, whether they played one minute or 30. I’m really proud of this team.”

Doncic was asked after the game if he or Antetokounmpo was in a better position to break the EuroBasket single-game scoring record. Doncic didn’t hesitate with his answer: He picked Antetokounmpo.

“I would bet on Giannis,” Doncic said. “Why? Because he’s Giannis Antetokounmpo.”

“We showed what we are made of,” Dragic said.

“Finally, we got a win,” Lithuania coach Kazys Maksvytis said. “We’ve got a chance for the next stage.”

Lithuanian fans were cheering for France on Tuesday. Lithuania’s win, combined with France’s win over Bosnia and Herzegovina, means the last qualifying spot out of Group B is still unclaimed.

It’ll be decided Wednesday when Lithuania plays Bosnia and Herzegovina, the winner moving on to Berlin and a round-of-16 game, the loser heading home eliminated.

If France had lost Tuesday, Lithuania would have been eliminated. Instead, those Lithuanian fans serenaded the French with cries of “Merci!” for keeping their national team’s hopes alive.

“It feels amazing,” Lithuania forward Sabonis said. “They travel to every championship to support us. It’s sad we couldn’t give them a win over the weekend, but we’re glad we could give them one today and the goal is to give them another one tomorrow.”

Marius Grigonis had 15 points and Rokas Jokubaitis added 10 for Lithuania. Zoltan Perl scored 16 for Hungary (0-4), while David Vojvoda and Rosco Allen each finished with 10.

Thomas Heurtel’s 3-pointer with 5:49 left put France ahead to stay and started a game-ending 22-7 run for the winners, who were already assured of a spot in the round of 16.

Guerschon Yabusele scored 15 for France (3-1), while Heurtel and Fournier each had 14 and Rudy Gobert posted an 11-point, 12-rebound performance.

Jusuf Nurkic, Miralem Halilovic and Dzanan Musa all had 14 for Bosnia and Herzegovina (2-2), while John Roberson had 13 and Edin Atic finished with 10.

At Prague, two-time reigning NBA MVP Nikola Jokic scored 29 points and was 11 of 13 from the floor while grabbing 11 rebounds for Serbia (4-0).

Vasilije Micic added 19 while Nikola Kalinic and Ognjen Jaramaz each scored 10 for Serbia.

At Prague, Poland was down by 13 in the third quarter before closing the game on a 39-20 run to tune up for its knockout-stage appearance.

Michal Sokolowski scored 24 for Poland (3-1), which got 16 from Aleksander Balcerowski and 10 from Jakub Garbacz.

Charlon Kloof led the Netherlands (0-4) with 26, and Yannick Franke scored 13.

Lauri Markkanen continued his strong tournament with 34 points and 10 rebounds, and Finland clinched its berth in the round of 16.

The Czechs play Israel on Thursday and, according to FIBA, could reach the knockout stage with a win.

Henri Drell scored 20 points, Siim-Sander Vene added 18 and Estonia had no trouble on the way to its first win of the tournament.

Simone Fontecchio and Nicolo Melli each scored 19 points to lead Italy (2-2) to a needed win.

Both teams are headed to the knockout round.

Spain (3-1) clinched its berth in the round of 16, with Dario Brizuela leading the way with 18 points.

Vladimir Mihailovic scored 18 for Montenegro (2-2), which got 11 from Marko Simonovic and 10 from Kendrick Perry.

Dee Bost had 33 points and 12 assists, Aleksandar Vezenkov finished with 28 points and 14 rebounds, and Bulgaria kept its hopes alive.

First-round play in Groups A and B concludes, with Groups C and D getting the day off before they finish their round-robins on Thursday. Friday is an off day and the knockout round in Berlin starts Saturday.

Group B: Lithuania (1-3) vs. Bosnia and Herzegovina (2-2), France (3-1) vs. Slovenia (3-1), Hungary (0-4) vs. Germany (3-1). France, Slovenia (which wins the group with a victory) and Germany have already qualified, Hungary is eliminated and the Lithuania-Bosnia game is the one that matters most.

25-under-25: Desmond Bane of the Grizzlies will keep proving you wrong
Heat lock up Herro with 4-year, $130M extension
‘Grateful’ Simmons makes his debut with Nets
Boston Celtics have found potential answer to Danilo Gallinari injury
Nash on Simmons: ‘Don’t care’ if he never shoots