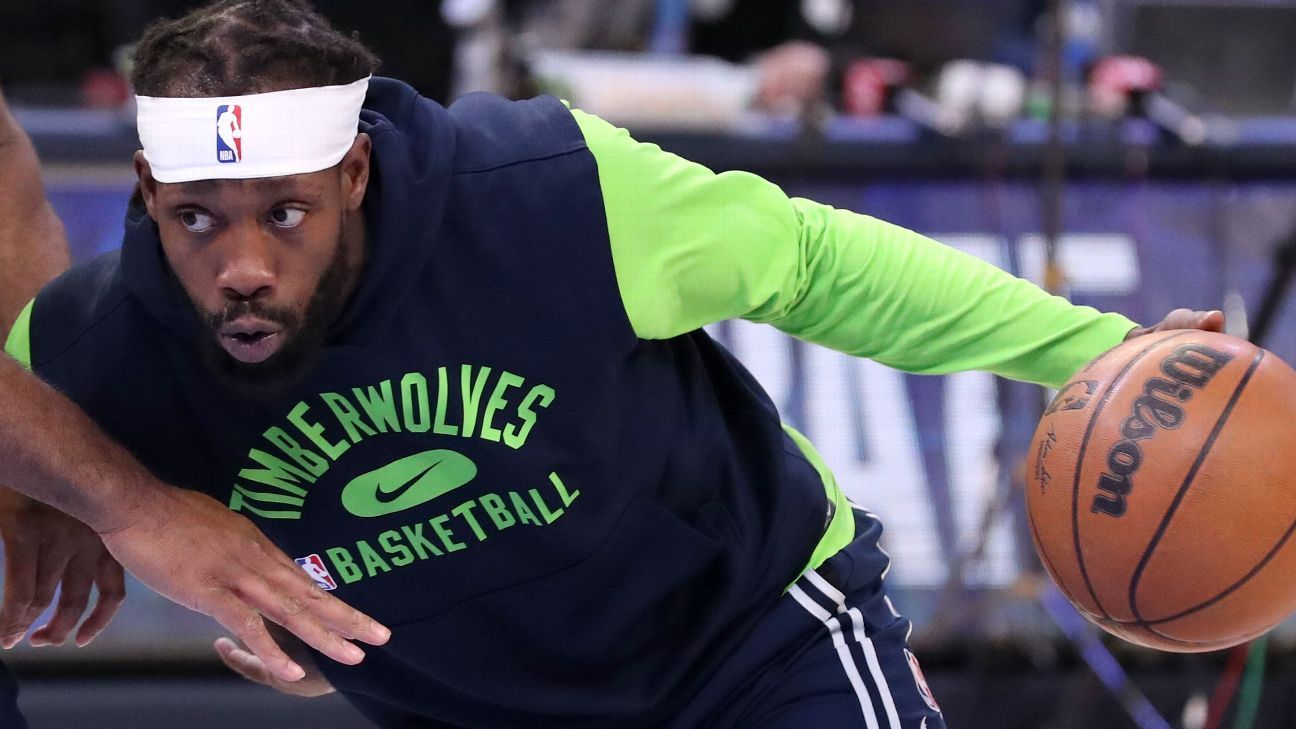 “Love that brother,” an appreciative Beverley said. “First dime of the year.”

Westbrook put aside any rivalry with Beverley and was the only Lakers player to attend Beverley’s first official appearance with the team. While it remains to be seen how this point guard pairing might work alongside LeBron James and Anthony Davis, Westbrook and Beverley set the tone Tuesday that they are ready to team up, embracing each other after Beverley was done talking.

“Super excited,” Beverley interrupted when asked about his relationship and fit with Westbrook. “… I was asked this question two, three years ago, [about] someone I always wanted to play with and [Westbrook] was the first name. I have [known] Bron since I was a baby, a rookie in this league, so obviously I want to play with him.

“But a player with that competitive spirit, that fire, that will, that dog, that nastiness, that grit, to have a running mate like that, I have never had that. So I am super excited to see where it goes. Obviously like any relationship or any marriage, things, we are going to have tough conversations. That is what comes with winning, but I am excited about those conversations, I am excited about the practices. I am just excited to be able to compete with someone like that.”

Westbrook and Beverley are used to competing against each other, and it got contentious at times. During Game 2 of the Oklahoma City Thunder‘s playoff series against the Houston Rockets in 2013, Beverley collided with Westbrook’s knee while going for a steal. Westbrook had to have surgery to repair a lateral meniscus tear in his right knee.

Nearly a decade later, the two are teammates and were laughing together after Westbrook’s towel pass to Beverley. New Lakers coach Darvin Ham said he won’t be afraid to start both point guards together if that helps improve the team.

“If they play defense,” Ham said. “We’ve got a while. That’s still a ways off, but definitely. People get caught up in the starting lineups a lot, but you look at who is finishing games. Those starters, they’re out there to set that tone for the entire team throughout the game.”

“But, I’m not scared of that,” Ham added. “It’s definitely a bullet in the chamber. We’re looking forward to it, man, those guys in the backcourt together, man.”

Beverley described the fit with Westbrook as “perfect.”

“I shoot a ton out of the right-corner wing,” said Beverley, who was dealt from Utah to the Lakers for Talen Horton-Tucker and Stanley Johnson. “He posts on the left wing out of [timeouts], he likes to post on the right wing. I shoot 50% from the left-corner 3. It works. To have another ball handler out there with me, obviously with LeBron also, the more ball handlers the better you are as a team.”

Beverley spent four seasons with the LA Clippers before he was traded to Minnesota prior to last season. The veteran — who was surprised to be traded from the Timberwolves after a playoff appearance to Utah this offseason — acknowledges how different it is in Los Angeles to be a Laker now. But Beverley knows all that matters is getting the Lakers back to the playoffs.

And he hopes to bring a relentless will every day to get the Lakers all on the same page after last season’s chaotic disappointment.

“I just feel like they didn’t make the playoffs last year,” Beverley said when asked about coming to a team with 17 championship banners. “We’re being honest, that’s just the truth, so you can see all the banners, but you know, it’s what have you done for me lately? And lately, [the Lakers] haven’t been a good team. And I’m here. Obviously, Coach Ham is here.

“The polarizing figures out here, what’s the reason, how do we get to it, how do we win, what do we do? What do we sacrifice? What do we give up? Everybody wants to go to the bank and take out, but you have to give something also to be a successful team. So what are you going to give up? And that’s my thing, and that’s what I’m gonna implement.”

And Beverley is looking forward to playing alongside James. Beverley has talked before about how much he has wanted to be on James’ team.