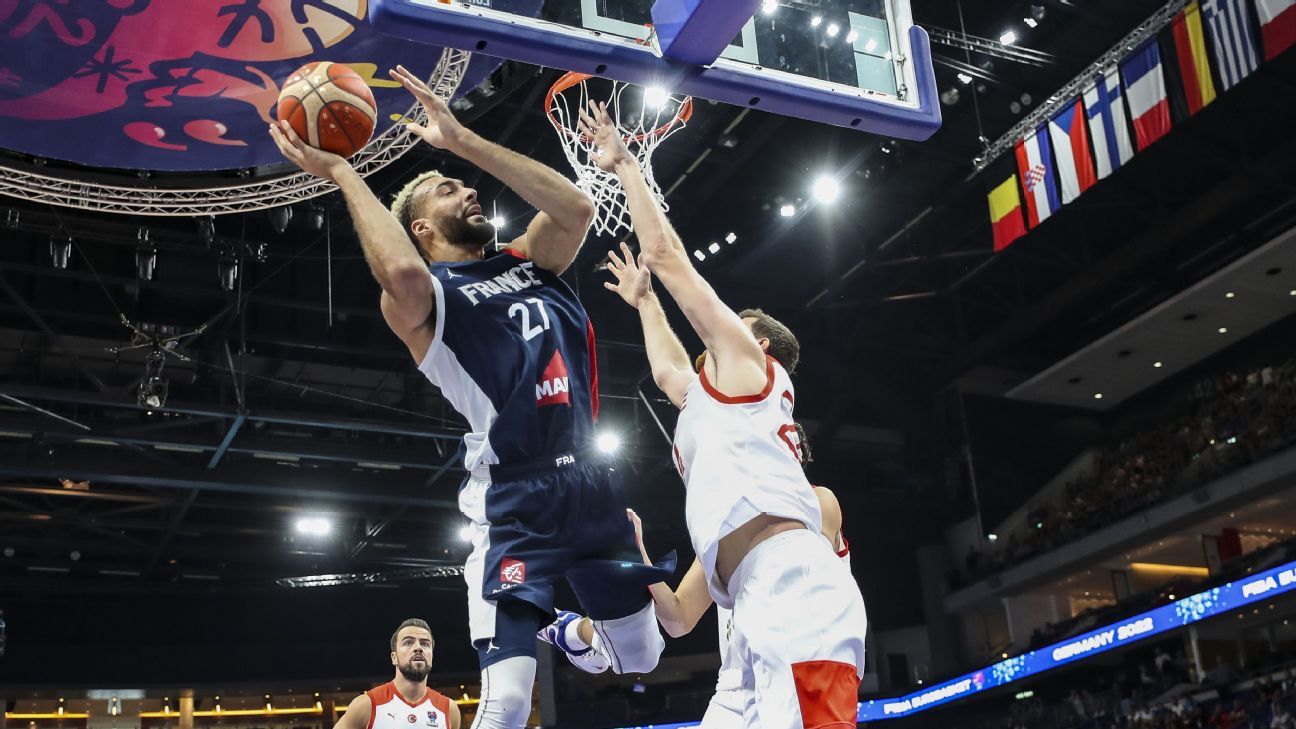 Gobert had a putback dunk with 2.7 seconds left in regulation to tie the game then scored the first four points of overtime, and France never trailed in the extra session.

Turkey had what seemed like full control of the game with 12.2 seconds left in regulation. It had the ball, up by two, was going to the foul line for two free throws and would keep possession of the ball after those shots because France had been whistled for an unsportsmanlike foul.

But Cedi Osman missed both free throws, a scene reminiscent of when he did the same late in what became a one-point loss to the U.S. at the Basketball World Cup in 2019. France wound up forcing a turnover on the ensuing possession, and Gobert’s dunk tied the game.

“Really tough spot for us, but we got lucky, he missed both,” Gobert said. “Then we were able to steal the out of bounds, get a bucket and get to overtime. We never stopped. We never stopped fighting. We always believed. Obviously, not our best game, but the thing I’m really proud of is the fact that we never gave up. A lot of teams would have given up in that position.”

Thomas Heurtel and Evan Fournier had 13 points apiece for France, which led by 16 midway through the second quarter.

But Turkey closed the third quarter on a 19-0 run, turning an 11-point deficit into a 57-49 lead going into the final 10 minutes of regulation. France missed 11 consecutive shots in that stretch.

Turkey had a chance to win on the final possession of overtime, but Furkan Korkmaz lost his dribble with about two seconds left and his team never got a shot off.

“I don’t know what to say, really,” Tuncer said. “I’m so mad. I’m so sad. If I cannot find any nice words, I’m sorry about it. This is unacceptable.”

France will play the winner of the Sunday game between Serbia and Italy in the quarterfinals. That matchup is scheduled for Wednesday.

“Maybe it’s the worst emotional loss in my 26-year career,” Turkey coach Ergin Ataman said. “Congratulations to France. I hope that they will continue on a good way in the quarterfinals. That’s all.”

Doncic and Goran Dragic combined to score or be credited with assists on Slovenia’s first 40 points of the second half.

“Belgium was playing great basketball,” said Doncic, who is averaging 28 points in six tournament games and 39.3 per game in his past three contests. “We knew this was going to be a hard game. They were fighting until the end. But in the end, I think we played a little better.”

Doncic had 5 rebounds, 5 assists and 4 steals for Slovenia, while Klemen Prepelic scored 13, Mike Tobey finished with 12 and Dragic added 11.

Slovenia got to the line 25 times to only eight for Belgium.

Next for Slovenia is a quarterfinal game Wednesday against the winner of the Ukraine-Poland matchup. Those teams will play Sunday.

Dennis Schroder scored 22 points and Germany wasted most of a 27-point second-half lead before hanging on to oust Montenegro.

Germany led 51-24 early in the third quarter before Montenegro outscored the hosts 53-29 over the next 19 minutes.

But Germany sealed the win with five free throws in the final seconds — three of them coming off an unsportsmanlike foul and technical foul call.

Maodo Lo and Franz Wagner both scored 14 for Germany. The Germans will meet either Greece or the Czech Republic in the quarterfinals Tuesday; those teams meet in a round-of-16 game Sunday.

Kendrick Perry scored 25 for Montenegro, which got 22 from Bojan Dubljevic, 13 from Marko Simonovic and 12 from Vladimir Mihailovic.

Rudy Fernandez and Juancho Hernangomez both scored 13 for Spain, which will meet either Finland or Croatia in the quarterfinals Tuesday. Finland and Croatia play a round-of-16 game Sunday.

Brown scored the first five points of overtime, and Spain never trailed in the extra session.

Ignas Brazdeikis gave Lithuania a chance, getting a tip-in to rattle around the rim and fall as time expired in regulation. But Lithuania wasted an eight-point lead in the final 5:56 of the fourth quarter, and Spain wound up tying the game on a layup by Brown with 2:23 left in the fourth.