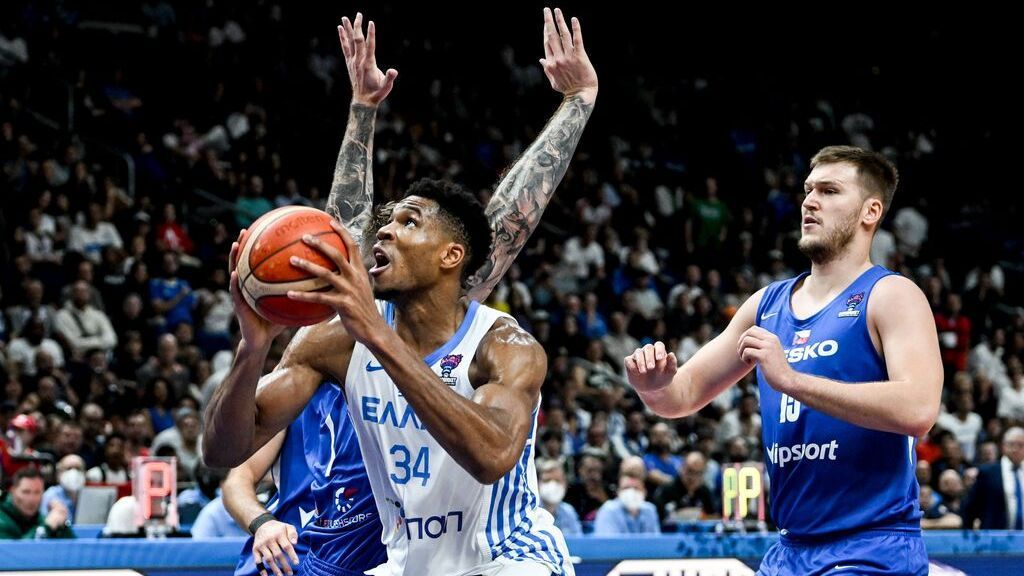 Giannis Antetokounmpo had 27 points and 10 rebounds as Greece advanced to a quarterfinal matchup with host Germany.

Greece got 14 points from Nick Calathes, 13 from Ioannis Papapetrou and 10 from Kostal Sloukas. Jan Vesely had 21 points on 10-for-13 shooting for the Czech Republic, which got 17 from Vojtech Hruban, 12 apiece from Ondrej Balvin and Patrik Auda, and 11 from Jaromir Bohacik.

It was the fourth and final game of the day — a mathematically odd day in Berlin, where all four winners scored exactly 94 points.

Serbia and reigning two-time MVP Nikola Jokic were among the losers, as the favorites to win the tournament were upset by Italy 94-86.

Marco Spissu scored 22 points and Nicolo Melli added 21 for Italy, which got 19 from Simone Fontecchio and 16 from Achille Polonara. Jokic led all scorers with 32 points for Serbia, plus he added 13 rebounds. He made 8 of 14 shots from the field; his teammates combined to shoot 18-for-47 (38%).

Italy will play France in a quarterfinal game on Wednesday.

Earlier in the day, Lauri Markkanen scored 43 points to assure Finland of its best EuroBasket result in 55 years after it knocked off Croatia 94-86.

Shawn Huff’s 3-pointer with 4:25 left put Finland ahead to stay, Markkanen’s layup capped a 10-0 game-deciding run and Finland topped Croatia for its first EuroBasket quarterfinal berth since 1967. Finland will play Spain on Tuesday, seeking its first semifinal berth at the European championships in 17 appearances.

Markkanen made 19 of 29 shots from the field, scoring 26 of his points in the second half. He also had nine rebounds for Finland, which got 17 points from Sasu Salin and 16 from Edon Maxhuni. The 43 points ties Markkanen for the eighth-highest scoring performance in EuroBasket history and the best by a Finnish player.

Bojan Bogdanovic scored 23 points for Croatia, which got 17 from Jaleen Smith, 12 from Dario Saric and 11 apiece from Krunoslav Simon and Karlo Matkovic.