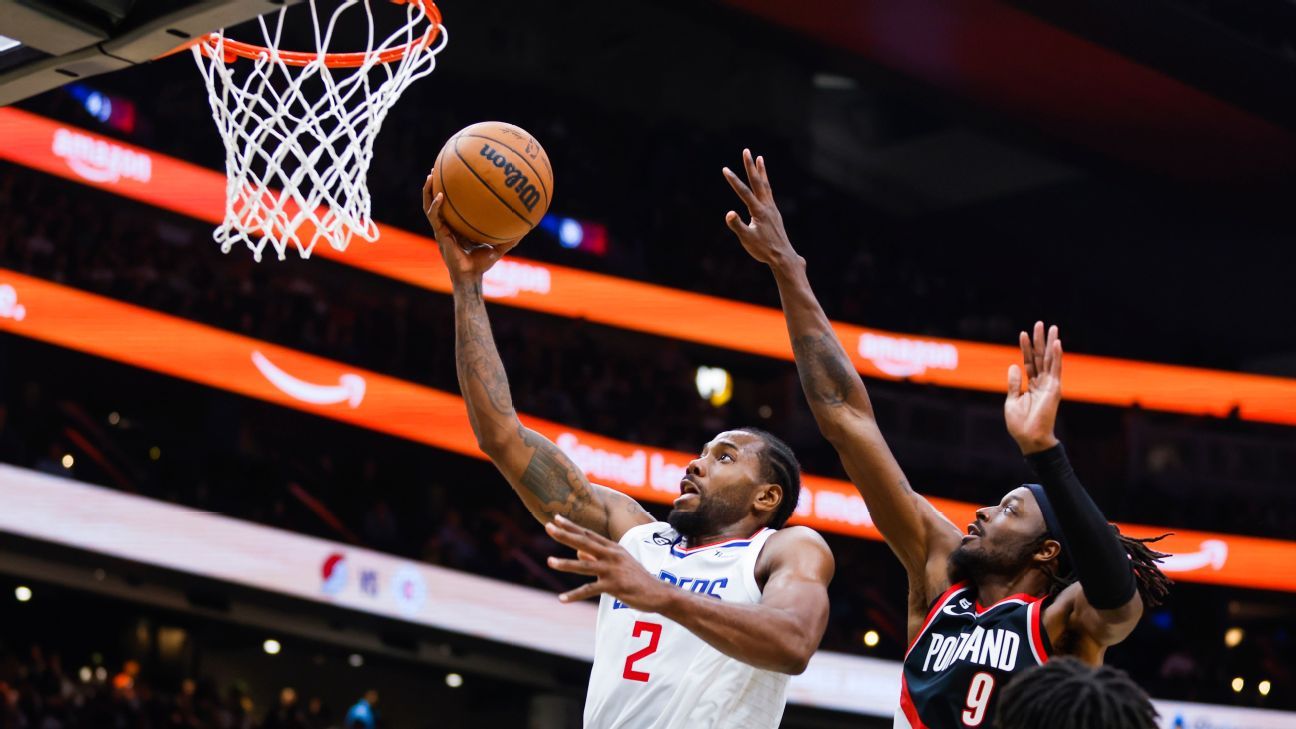 SEATTLE — After waiting 476 days to return to NBA action, Kawhi Leonard needed only 15 seconds to launch and drill a 3-pointer again.

In his first game in 15-plus months, Leonard began his return to the court by hitting his first shot from behind the arc before finishing with 11 points and four rebounds in the Clippers’ 102-97 preseason win over the Portland Trail Blazers at Seattle’s Climate Pledge Arena on Monday night

“It was great,” Leonard said of playing again for the first time since tearing his right ACL in Game 4 of the Clippers’ second-round playoff series against the Utah Jazz on June 14, 2021. “Just being able to put all that hard work that I did throughout the, 14, 16 months, just able to put it to test and playing against NBA talent, it was good.

“Just being out there with the guys and talking, I missed it. It was a great experience for me.”

Leonard played only 16 minutes, all in the first half, as Clippers coach Ty Lue opted to only play his starters one half. That same script also applied to point guard John Wall, who made his own return from a year off and had five points and three assists off the bench.

The Clippers played their second straight game in Seattle after beating Israel’s Maccabi Ra’Anana on Friday. But this one felt like more than a normal preseason contest because of Leonard’s return and Wall’s debut — plus the Seattle-flavored crowd.

With the NBA back in town, Seattle basketball came out in full force with Lenny Wilkens, Shawn Kemp, Gary Payton, Detlef Schrempf, Jamal Crawford and Sam Perkins among those in attendance as fans chanted “Sonics” several times.

For the Clippers, seeing Leonard — who also had two assists and a pair of steals — back on the floor again was something they’ve waited over a year for.

“It was funny because PG [Paul George] asked me if I had the bubbles before the game, like [in] the stomach,” Leonard said. “I am like, nah. There might be a little [chicken] wing in there floating around. [But] I felt the same way as if I approached any other game today.”

Leonard, who said he “definitely got a lot stronger” after 13-plus months in the gym, used his muscle in the paint over smaller defenders to draw trips to the free throw line. He didn’t shoot with the same Leonard efficiency, making 3-for-8 from the field, but his timing will come.

The most important thing was Leonard returning and coming out of the game healthy.

“The body feels good,” Leonard said. “Obviously, I am not going to be playing 35 minutes, 38 minutes to start, so it is going to be a little shaky early, probably. But like I said, it is a journey, it’s a process, and that is what I am about.”

Wall didn’t get many opportunities to flash the speed that helped make him the fastest point guard in the game for several years. Competing for the starting point guard spot with Reggie Jackson, Wall came off the bench in his debut and gave the Clippers a glimpse of his passing. He passed up on a catch-and-shoot 3 to hit a wide-open Robert Covington at the top of the key for a 3. On another play, Wall attacked the basket before finding trailing center Moses Brown, who fumbled the pass on what could have been a score inside.

Wall hit a 3-pointer late in the first half for his only basket.

“I could have shown off [the speed] in the halfcourt,” Wall said when asked about not having many opportunities to run. “But I was just trying to run the sets and get used to being in the moment with certain guys but just trying to push the pace and keep the pace into the game … It will all come to me, it’s all easy, like I know I still got the stuff I need. But now I think for us, it’s just trying to figure out different lineups.”

The Clippers hope Wall will help them push the tempo more after finishing 19th in pace of play last season. Lue said Wall will start the Clippers’ next preseason game on Sunday.

And Leonard said he plans to play in the next preseason game, as well, with five days in between tilts.

“Offensively, Kawhi, I thought he got a little tired,” Lue said. “But he got some shots he normally makes. But just seeing him out there on the floor just makes a big difference for our team.”