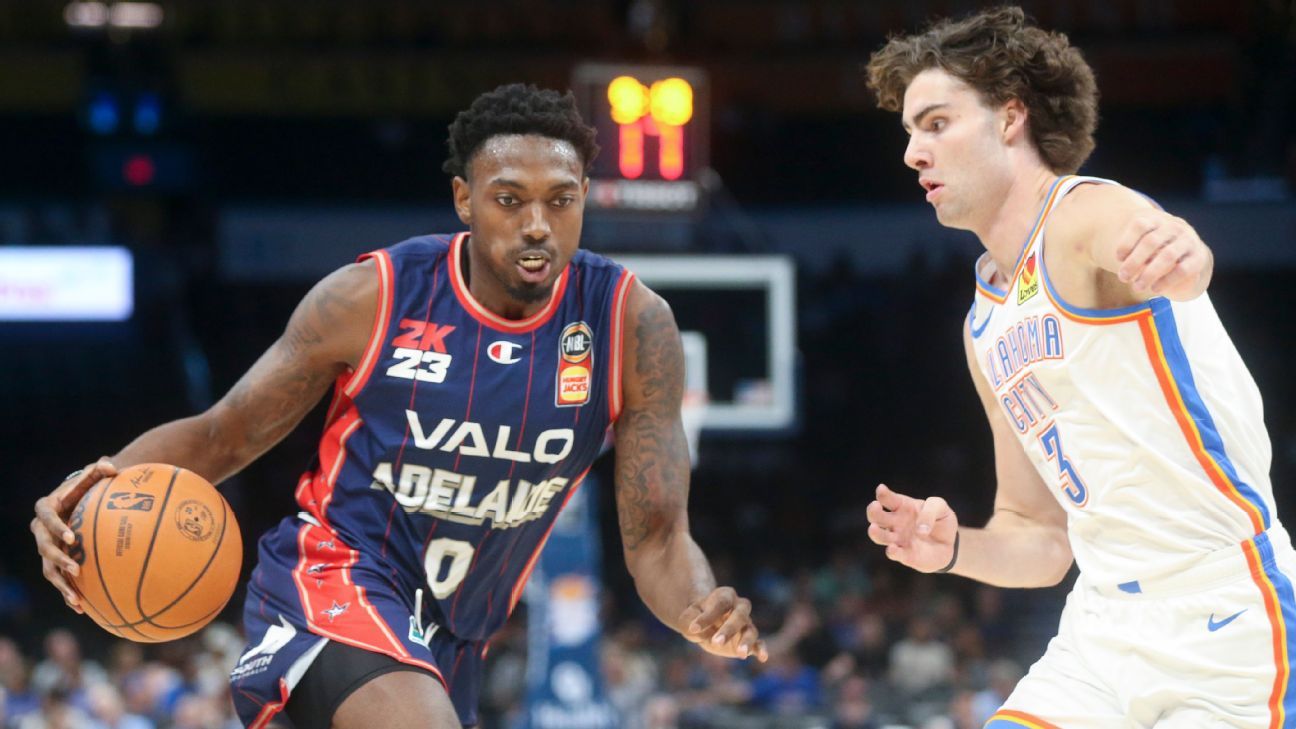 OKLAHOMA CITY — The Adelaide 36ers, the seventh-place squad in Australia’s 10-team National Basketball League last season, boarded a 6 a.m. commercial flight on Sept. 28, when a few players sat in business class and the rest of the roster and staff squeezed into coach.

The team made connections in Sydney and Los Angeles before finally landing in Phoenix 19 hours later, right around lunchtime the same day, as odd as that sounds. They grabbed a quick bite and headed straight for the Arizona State campus for practice, preparing for a three-game American visit and what they hope will be the franchise’s first winning season since 2017-18, an NBL campaign that the 36ers will start a bit later than their rivals due to their preseason dates against NBA foes.

“We understand the job we’re trying to get done,” said shooting guard Craig Randall II, who received more publicity during this trip than he did all last season while averaging 26.7 points per game for the G League’s Long Island Nets. “Honestly, it’s not even about winning these NBA games. It’s about preparing for the NBL season.”

Point guard and team captain Mitch McCarron, who was 0-4 in preseason games against NBA teams with Melbourne United, put it like this: “We know now that we’re probably going to have a little bit of a target on our back for sure.”

That’s an understatement, considering the 36ers became the first team from Down Under to defeat an NBA opponent, shocking the Phoenix Suns at the Footprint Center on Sunday.

“It got about halfway through the fourth and we’re all just kind of pinching ourselves,” said NBL veteran Sunday Dech, whose past teammates include Charlotte Hornets star LaMelo Ball and Oklahoma City Thunder foundation piece Josh Giddey.

Adelaide’s 134-124 win was the first time an NBA team lost in a preseason game against an international squad since EuroLeague powerhouse Real Madrid’s 142-137 home win over the Thunder in 2016, when a 17-year-old kid named Luka Doncic contributed three points, four assists and five rebounds for Los Blancos.

Sure, the Suns treated it like a preseason game. They pulled their starters with 4:29 remaining in the third quarter after Chris Paul, Devin Booker and Co. cut a 12-point halftime lead to three.

Nevertheless, the basketball world buzzed about the 36ers letting it fly from deep — 24-of-43 from 3-point range — to beat the team that had the NBA’s best record last season. That occurred just a couple of days after the 36ers played their reserves for most of an 86-81 win over Overtime Elite — a program that pays six-figure salaries to promising teenagers including twin lottery prospects Amen and Ausar Thompson.

“Their stars played a little longer than they probably wanted to, just to show if they could punch our lights out,” 36ers coach C.J. Bruton said of the Suns. “We went toe to toe when we needed to for a little bit longer. They weren’t able to shift the needle.

“I’m grateful that we played the way we did just to show how competitive our league is.” Bruton is a second-generation Australian hoops legend — the son of Cal, a New York City-raised American import who averaged a league-high 33.2 points during the NBL’s inaugural season in 1979 — who won six titles as a player.

The younger Bruton was a second-round draft pick in 1997 by the Vancouver Grizzlies after leading Iowa Hills Community College to an NJCAA title, went to training camp with the Portland Trail Blazers and years later had a summer league stint with the Cleveland Cavaliers.

In his second season as a head coach, Bruton is trying to join his father on the short list of men to win NBL titles. One key to that mission: Make the most of the three roster spots the NBA allots to American imports.

Bruton “handpicked” three new players for those spots this offseason. He poached wings Antonius Cleveland and Robert Franks, who both have a bit of NBA experience and starred in the NBL last season, from rival teams. The 36ers filled the last spot by signing shooting guard Craig Randall II, who told ESPN he turned down NBA camp invitations for guaranteed money and the chance to start for Adelaide.

Those imports, all of whom have buyout clauses in their contracts if an NBA offer comes, definitely paid dividends in Phoenix. Randall scorched the Suns for 35 points, going 9-of-17 from 3-point range. Franks had 32 points. Cleveland, the NBL’s reigning Defensive Player of the Year, added 22.

“That import trio is going to be a tough one to beat in the NBL — and in the NBA as well, as you saw,” said Giddey — an Australian who played a season for the 36ers as part of the NBL’s “Next Star” program before entering the NBA draft in 2021.

Oklahoma City opened up a double-digit lead midway through the first quarter, was up 30 at halftime and coasted to a 131-98 win, the kind of rout NBA teams usually enjoy against international foes who typically serve as Washington Generals-type fodder after flying across oceans.

“How much caffeine do they have back there?” Bruton joked to a scout sitting at the scorer’s table during the second quarter. “I need something to wake my guys up.”

It would have been understandable if the 36ers were hung over from a wild celebration of their historic win, particularly considering that Scottsdale clubs are a favorite detour for NBA players during trips to Phoenix. That wasn’t the case: Adelaide’s players said they headed back to the hotel after their win over the Suns and talked a bit before going to bed.

“We went to Top Golf the next day. I guess that was the celebration,” Cleveland said, shrugging.

“We’re thinking bigger picture this year,” Franks said. “These two games are huge for us and huge for Australia, but we’ve got a championship mark that we’re trying to get.”

The rough outing in OKC doesn’t diminish the 36ers’ feat in Phoenix, nor does it dim Adelaide’s optimism that they’re a force in the NBL this season. But how does a team that looked like a world-beater earlier in the week finish their American trip with such a whimper?

One NBA scout offered a sarcastic explanation via text at halftime Thursday night: