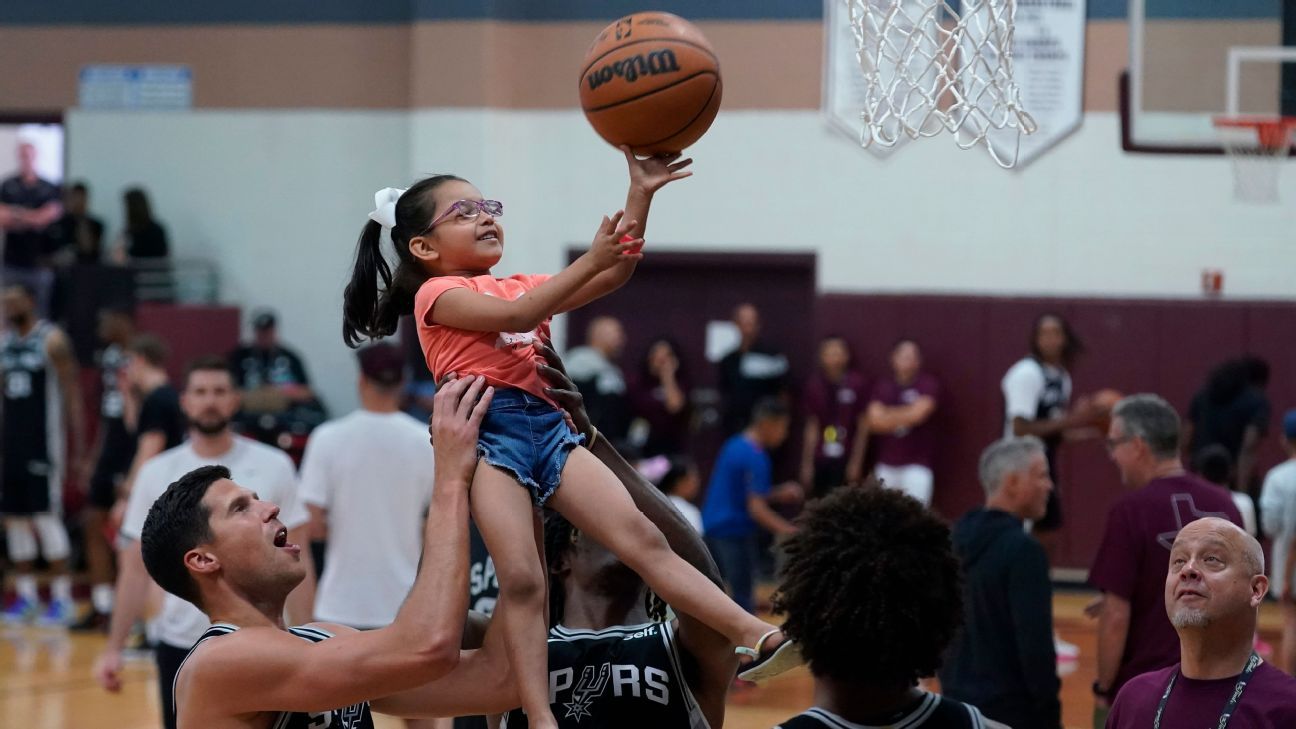 UVALDE, Texas — The smallest gesture can have a huge impact.

That was reaffirmed to the San Antonio Spurs when the team held an open practice and community fair in Uvalde, Texas.

It was 137 days ago that the small town, 88 miles southwest of downtown San Antonio, was the sight of an elementary school shooting. On May 24, 19 children and two teachers were killed in a shooting at Robb Elementary.

The Spurs held an open practice Saturday at Uvalde High School in support of the students of Robb Elementary and those affected by that tragic day.

“It’s extremely sad,” San Antonio guard Tre Jones said. “We wish everybody was with us, still being able to enjoy this moment. We are just trying to bring joy to the families and all the kids who were friends with those kids that died and help the teachers as well. We want to bring a moment of happiness into their lives again and try to just bring a smile to their faces.”

With a transformative roster brimming with young players, San Antonio coach Gregg Popovich received the loudest ovation as the team took the court for a brief practice. The Spurs then literally lifted the community, raising toddlers on their shoulders to bring them closer to the rim for a basket.

The true elevation was felt off the court.

Monica Flores’ eldest daughter is still understandably traumatized by the day’s tragedy. Her daughter was in the fourth grade, the same classification as those who died. Her daughter’s classroom was directly across the hall from the two adjoining rooms where the shooting took place.

“She has her moments, but we will never forget,” Flores said. “Sudden hands, different people that look like the shooter — she did see the shooter through her classroom window. She is terrified by people who look like him, not that she judges, but people have [similar looks] and it’s just scary.”

Flores’ daughter is scared to leave her home. She is terrified of certain situations. But that was pushed aside for a few hours, thanks to the Spurs.

Flores’ daughter eagerly anticipated Saturday afternoon once she heard the Spurs were coming to Uvalde just to see her and the other kids from Robb Elementary.

Dressed in the Manu Ginobili jersey her uncle purchased for her a few years ago, Flores’ daughter and the crowd were surprised and delighted to see the Spurs’ Hall of Fame guard in attendance. Now a special adviser with the Spurs, Ginobili spent the entire event signing autographs and taking pictures with those in attendance.

Flores’ daughter sprinted directly for Ginobili at midcourt when it was her group’s turn to take the court and meet the players.

And just as hundreds of fans have done for more than a decade, Flores’ daughter was beaming in delight as she posed with Ginobili.

“I am so glad she got to experience this with Manu,” Flores said.

The feeling was mutual for the Spurs.

“It’s big for me to be able to come out here and see the kids smile,” San Antonio forward Keldon Johnson said. “We know it’s been tough. If we can just come out here and bring just a little bit of joy, it’s a successful day for us.”

The tragedy of May 24 is something the Uvalde community will never get over, but the residents are trying to get through it.

George misses Clippers’ win with hamstring strain
For the struggling 76ers, it might get worse before it gets better
Kawhi, PG to remain out Sunday due to injuries
Ja Morant effortlessly drains half-court buzzer-beater: Best memes, tweets from NBA Twitter
Hornets’ Hayward has shoulder fracture, per agent