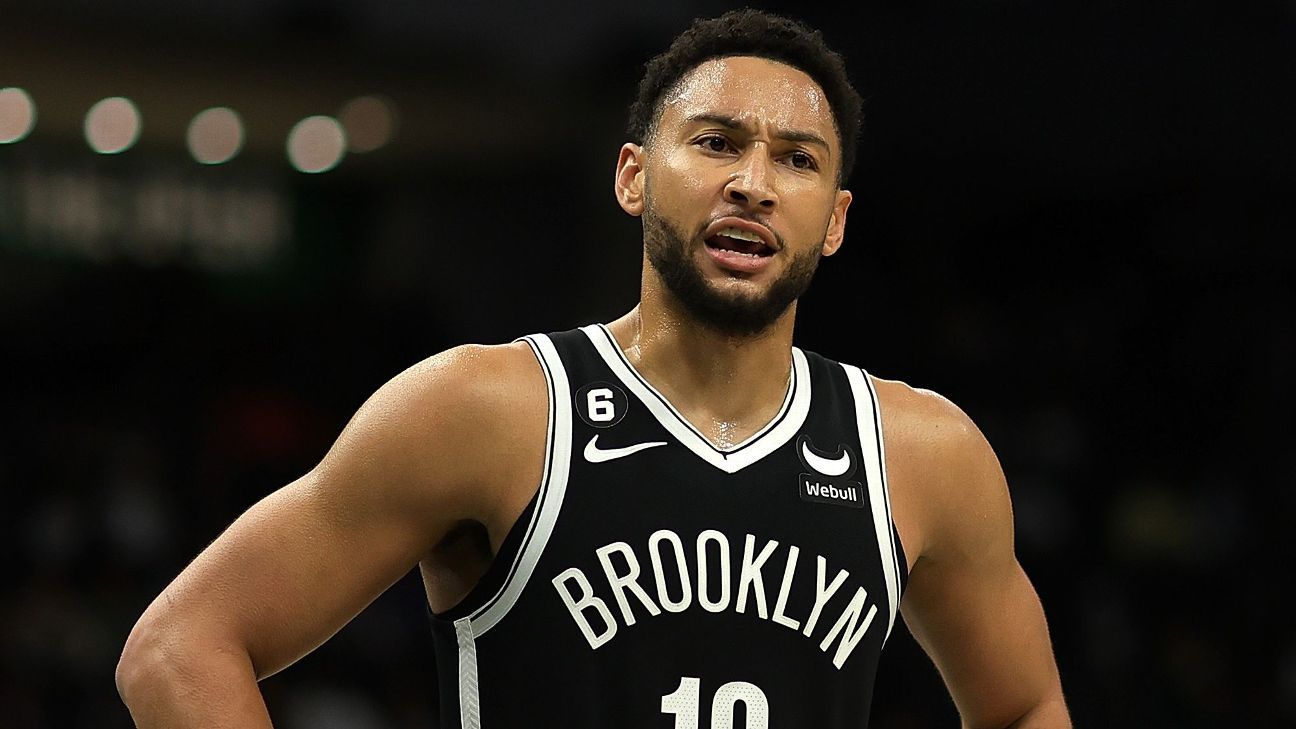 Ben Simmons looks and sounds like he’s in a very good place with the Brooklyn Nets.

Sitting in the padded courtside seats of Milwaukee’s Fiserv Forum during shootaround on Wednesday, the 26-year-old swingman says, after nearly a year and a half away from an NBA floor, he is embracing his new role alongside established stars Kevin Durant and Kyrie Irving.

The Nets are banking on it — and have supported the three-time All-Star as he has dealt with his mental health after a tumultuous exit from the Philadelphia 76ers and offseason back surgery.

Following Wednesday’s preseason win against the Bucks — a game in which Simmons contributed seven points, eight rebounds and 10 assists — Irving couldn’t hide his excitement about the progression he continues to see from his teammate and how important the impact a healthy Simmons will have on the roster.

“It’s positive news,” Irving told ESPN after that win. “Positive news to have [Simmons] be out there, just playing his game. And we don’t want him thinking about too much other than just playing with that same no fear mentality and we’re going up to people’s chest this year.”

As Simmons prepares for his comeback season, he sat down with ESPN to discuss how he’s feeling mentally and physically, his upcoming return to Philadelphia in November and what it would mean to help lead the Nets back to prominence after so much time away from the game.

[Editor’s note: Answers have been slightly edited for clarity and brevity.]

How would you put into words how much you missed the game?

Simmons: You know, the first game I came back and played against the Sixers? The feeling of being on the court was so surreal it just felt like that’s what I was missing, in the sense of my life. Being on that floor … was just like, ‘This is where I’m supposed to be. This is where I feel comfortable — on the court.’ So it’s a blessing just to be back here and moving and playing against the best players in the world.

How much are you looking forward to being out here again and reminding people how good you can be?

Simmons: I can’t wait. But this is my third game and I haven’t even hit 30 minutes [of playing time] yet. I’ve gotten only a few reps up playing basketball in the last year, so it’s going to take time, but I’m excited to do that because I know what I’m capable of. It’s patience. It’s doing the little things, working every day, and getting back there.

On media day you said you feel confident that not only are you in a good place mentally, but that you’ll stay there throughout the year. How would you describe the work you put in to get to that place?

Simmons: It’s taken a lot of work. But that’s a part of my life, everyday routine now, is working on myself, staying in that place. Everyone has down times and things like that, but just acknowledging what you know about yourself and what puts you in those places, and then how to get out of it.

What do you do when people are like, “Ben can’t shoot, or Ben’s not going to go to the line?”

Simmons: They’re going to say that regardless. Even if I hit a shot, what are they going to say? ‘I still can’t.’ F—, I can’t make everybody happy, you know? … That’s like saying can Giannis [Antetokounmpo] shoot? Can he?

Not in the beginning. But now [Giannis’ shot is] better.

Simmons: Yeah, better. But, what is it? Is it not taking as many shots as people want me to? Is it not hitting every shot? Fans are always going to say something. And it’s probably something that they’re like, ‘Yo, I can get in his head by doing this because I know this has always been something that people have spoken about.’ But at the same time [people say], ‘Ben can make great plays,’ so …

ESPN’s countdown of the league’s best players returns for its 12th season. See which stars made the cut, which vaulted to the top and which are sliding down the list.

How do you block out all the noise that seems to find you?

Simmons: It finds me all the time. And it doesn’t f—-ing stop. Sometimes I’m even sick of it, but then I’m like, ‘OK, I’m Ben Simmons,’ you know? Even the other day there was a clip of me air balling a shot at the park. Meanwhile, like 10 guys air balled multiple shots. So it’s like people will find one clip and try to make it that everything — like Ben can’t do [this or that]. You think I’m just air balling every shot? It’s not true. But you got to have tough skin and I realize that, but I can’t take everything personally. It’s social media.

Why do you think there is so much ire directed toward you?

Simmons: Because people know what I can do, what I’m capable of. I believe that’s what it is. Like if I was somebody that wasn’t capable of doing certain things, I don’t think people would be on my ass as much. And I don’t mind it because it kind of motivates me in a way. Obviously, sometimes it’s a lot for anybody to deal with that, but I look at it a little bit like a respect thing, in a way. Because if that wasn’t the case, then there would be no upside to me doing something well.

If I come out and play a great game, then you can’t say anything, you know? That’s why it’s kind of cool being on a team with [Durant and Irving] because they’ve been through different things in their careers, where they can kind of relate.

To this point — I’ve never been in an arena where the whole place is chanting “F— Ben Simmons!” [March 10 at 76ers]. What was that like?

Simmons: That’s when I didn’t play, right? When I was hurt. I don’t really know how I felt, because I don’t take it personally.

Simmons: Because I don’t know them. They don’t know me. They know the basketball side of me, but that’s not who I am as a person. And that’s the competitive nature of being in a hostile place like Philadelphia, you know? I was drafted there, it ended in a way where not everyone was happy about it, but that’s basketball, right? And it’s Philly. (chuckles) Like I don’t know if that’s happening in Indiana or anything like that. That’s Philly. That’s Philly for you.

Are you looking forward to that game [against the 76ers on Nov. 22]?

Simmons: F—, I can’t wait to go there, yeah. But for me, everything’s an experience and a learning situation. So for me I’m able to learn something that I’ve never been through before. I’ve never been traded and played against a team that I got traded from. Kev has, Ky has, a lot of guys have, but I’ve never been in that situation so — you have to go through it. Ky went back to Boston, and he didn’t play well, but it’s a lot. We’re people, too. We want to go out there and prove everyone wrong.

You spent so much time in Philadelphia; do you think there’s ever a point where that relationship will smooth itself out?

Simmons: Who knows? I can’t predict the future. I would have never told myself this would have gone this way at the start of my career. Who knows if in four or five years I end up going back? I don’t know. It could be a whole different situation, but for now I don’t want to make my mind up and say it’s not possible for anything to change.

While we’re on this topic — have you talked to Joel [Embiid] yet?

Simmons: I don’t talk to Jo. We never really spoke.

Create or join an ESPN Fantasy Basketball league for the 2022-2023 NBA season.

You guys had a lot of success when you were there. How would you describe that relationship now?

Simmons: I don’t think there was really a relationship there. Like in terms of a friendship? You can try as hard as you want to try to be close to somebody, be their friend, whatever it is, but everyone is different as people, so for me, it’s never personal. I don’t have any anger or hate towards him. He is who he is and I am who I am. And we’ve got our personal lives. And work is basketball, so in that moment, my goal is to win and I got to win with Jo. He’s a great player, we just didn’t get it done.

Do you feel like the Nets have accepted you and that they’re behind you?

Simmons: Definitely. I got support from all these guys, the coaching staff, the organization, so it’s up to me to go out there to do my job now and work. … It feels like home. It feels normal to be here and come to work.

Have you talked to [Durant and Irving] specifically about handling the criticism that comes your way?

Simmons: Me and Ky literally were just talking about it before practice. He’s like ‘Why is everybody on our heads?’ F—, we’re interesting people, I guess. Some guys you wouldn’t talk about because you just don’t care.

What would it mean to you to help this Nets team win a title?

Simmons: It would mean everything. To me, that would be a dream come true. In a situation like this, being in Brooklyn with these guys and this city, it would be incredible. But we got a long way to go, but I think this team’s capable of special things.

Would you say you’re in the best place that you’ve been in a while?

Simmons: For sure. I think so. You know what? I know so.