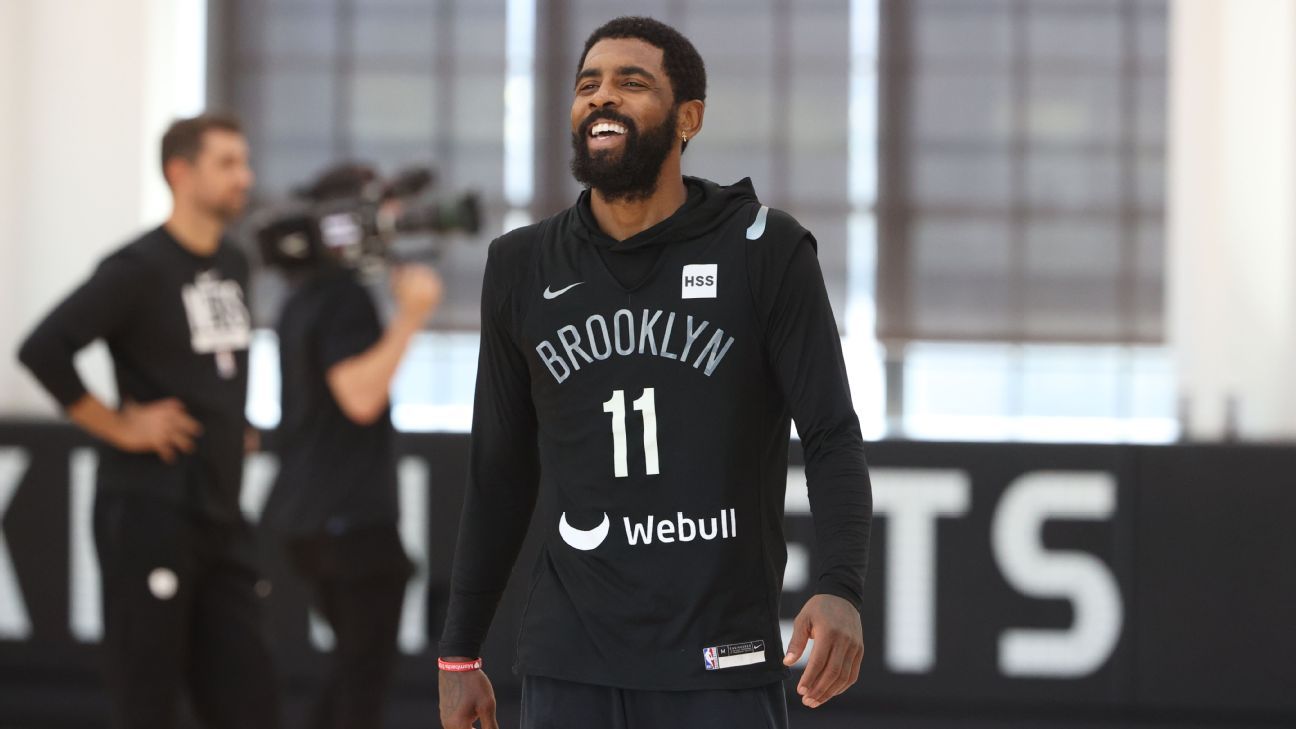 The vibes are good right now in Kyrie Irving‘s world.

As he stands inside the Brooklyn Nets‘ locker room following Wednesday night’s preseason win against the Milwaukee Bucks, Irving lights up some sage from the side of the room and discusses his team and what he feels is the positive direction it is headed after a dramatic and controversy-filled summer.

“I’ll tell you right now — it extends all the way up,” Irving told ESPN. “From [Nets owner] Joe [Tsai] all the way to the 16th guy on the team. We all can feel it because we all have a piece in our success. And we all have a piece in when we fail. So that accountability that we continue to hold for each other is definitely something that we’re going to continue to build on, and I think the results will speak for themselves.”

Irving, 30, opened up about regrets he might hold from the 2021-22 season, how he’s feeling about the Nets now, how much longer he wants to keep playing and why his love for the game will never disappear.

[Editor’s note: Answers have been slightly edited for clarity and brevity.]

On media day, you said that you could have signed that four-year extension worth over $100 million. Are you confident going into the new year that if you play at the way you’re capable of, that contract will still be there at the end of the season — whether it’s from the Nets or somebody else?

Irving: Well, I’m staying patient and letting those things play out, honestly. Because the best thing I can do right now is just build sustainable relationships and be there for people that go on the court and off the court. And that’s going to be a unique task this year. Eliminating those distractions of thinking about things that I know are either in the future or they are not, or hoping — I don’t want to be in that phase. I just want to be present, live every day as God has given it to me and legitimately just have fun with this profession. It’s a heck of a business, ain’t it?

How do you block out the fact that you could have already had the [four year, $100 million-plus extension] done, but now you have to go out and play at a high level to make sure another offer like that will be on the table in the future?

Irving: Well, I’m only as great as my team and the individuals that are around me. And they keep me very grounded and balanced in terms of what my goals are, what our goals are, and we focus on those.

I can’t control the energy that people pour out in terms of my name or what they feel about me, but what I can control is how I show up to my profession and make sure that I’m doing everything that I can to put myself in a great position to lead and be an example. And not just be somebody that just says a bunch of words and doesn’t follow through.

And I have great aspirations of leaving a legacy in this league and however many years that takes me is — that’s laid out [ahead of me], but in the meantime, I just want to build with people in this industry and win together. I want this to feel like a dream that we all can share. And that’s not just only with my Nets, but people that we’re going to be going against. It’s going to be fun. It’s going to be a fun ride. So I’m looking forward to that enjoyment as well, more importantly.

Do you have any regrets as you look back on last year — about anything?

Irving: I’d be lying to you as a human being [if I said I didn’t]. I think we all think about times we could have made better decisions, and times we wish we could have done things differently and I feel the same way at times throughout my life. … I legitimately just want to play the long game and not put too much pressure on myself or the people that I’m around.

This is something that I get to do every day. We say it as a cliché sometimes, but nah, we just let the play handle [itself] — enjoy the season, and then after that, we’ll go back and look at some of this reflection time and talk about these things in deeper detail, but as of right now that can’t be my focus.

It seems like you genuinely still love the game?

Irving: Always have. It was just taken away from me the last few years.

What is it like having it back again on a full-time basis now?

It never left you?

Irving: Yeah, the love … That’s part of being in a relationship. Not only with others, but yourself is that internal clock. Time is all we have. I’m having kids. I have three beautiful kids now. I have my wife. My life has changed.

My priorities definitely changed, but the love has always been a battle that is worth climbing, that is worth going on that mountain for. Every year, not to just win a championship, but to enjoy the process of building towards that. Whenever that year comes, great. If that’s this year, great. I’m praying for it, I’m going after it, but I just want, at this point in my career, a fresh start. I can start from day one on training camp, with everybody, get a fair chance at going after this thing. Injuries aside, no trade talks, no big dramas. Nothing.

Create or join an ESPN Fantasy Basketball league for the 2022-23 NBA season.

From your experience, what is the biggest point of advice you’ve tried to impart to Ben [Simmons] about how to handle the criticism that comes his way?

Irving: I grew up in the Internet days, I think you can appreciate that when technology hit the boom, we didn’t expect that social media would take over the whole entire platform basis of where we get everything. It is a one-place shop where you are legitimately taking your eyes shopping on whatever the algorithm throws your way. So, if we think about it on that level, I think the nerds can appreciate that, how much that changes us all.

For him, he’s grown up in Australia, there’s not much of a — I don’t want to disrespect his upbringing, but I don’t know if there’s a space where there’s a melting pot full of diversity and races coming together talking about issues as politics. And it’s just one world that you can honestly say what you feel. And not every country has shared that same freedom so for me telling him not only just ‘F all of it,’ but you got to be able to deal with it. You got to be able to face it.

This is an emotional time in our world. People attack other people for what they believe in, their jobs, whatever it is. So harsh criticism is part of it, but what’s justified is how you respond. And how you deal with it. … The moment he wakes up and he realizes like, ‘That’s not actually my life. I have a loving, supportive system around me of people that care about me, and these are people that I can go to for honest answers.’

Whenever you go to social media for honest answers, I don’t know if you’re going to return back smarter than when you went in. … There are also good people on there reaching out and wanting to help others, so I’m just one of those people for sure.

As a leader of the group, how do you make it so that Simmons knows he’s got support?

Irving: I think one of our greatest strengths as a human community is humanizing each other’s lives. He’s a human being so he’s going to respond his way. And he’s going to deal with things his way and we have to honor and respect that. That’s what people with integrity do. Not everyone lives by those same moral principles so yeah, as a leader, I feel like it’s my responsibility to protect him, but I also must understand he has to go through things on his own. And when he asks for help, just be there for him. …

I don’t want to say I have all the answers figured out myself because it’s an ongoing battle myself, just dealing with those ebbs and flows. But for him, I just don’t want to see him get caught up in the same nonsense.

How much longer do you want to play?

It was a passion, but I also chose that. … Coming into the league at 19 years old, no one gives you that guideline or game plan of what the league is going to require of you, so that’s what I’m saying. It’s a great partnership with the NBA and I appreciate being a player here. And there are goals that I have outside of the NBA, but as of right now, I’m just focused on this.

3 moves the Golden State Warriors can make to turn their season around
NBA refs are cracking down on traveling — whether teams like it or not
Mavs blow out old friend Brunson, Knicks at MSG
NBA Power Rankings: Celtics and Suns surging into December
4 NBA veterans doing too much for their rebuilding teams