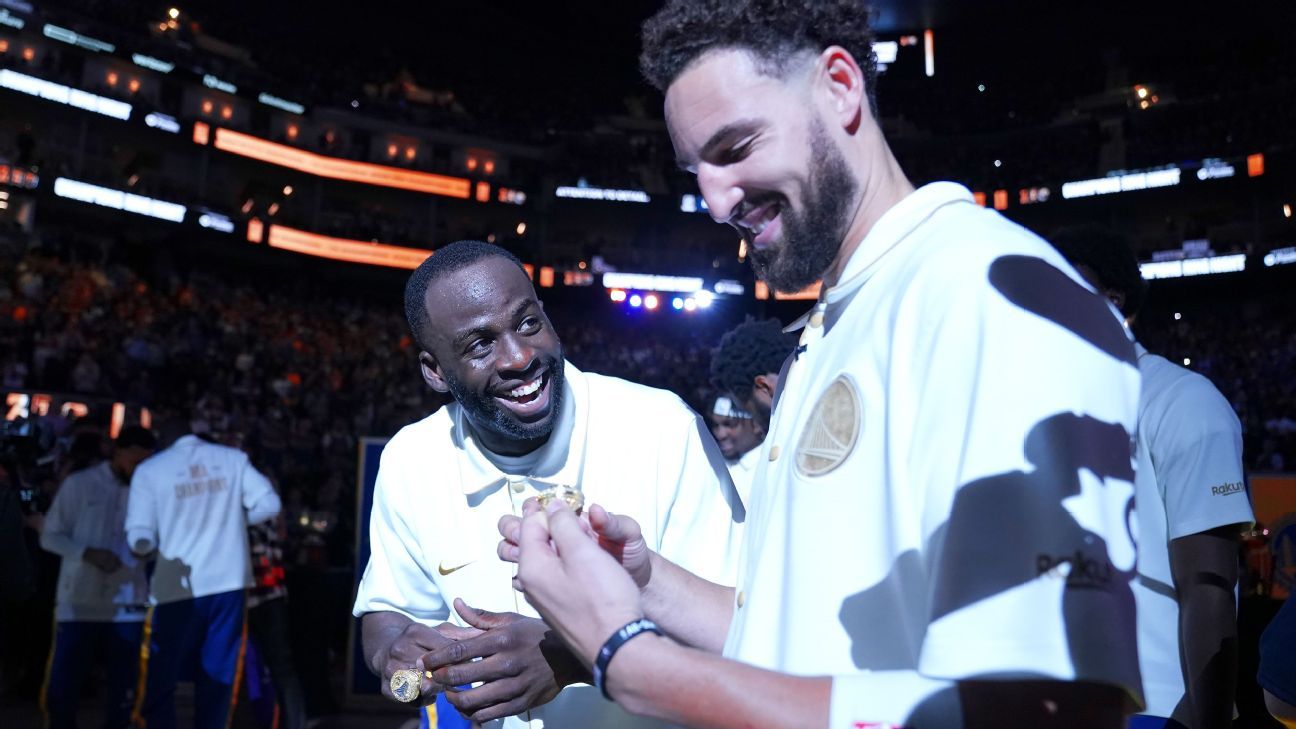 SAN FRANCISCO — The Golden State Warriors unveiled their 2021-22 NBA championship banner and rings Tuesday night ahead of their season-opening 123-109 win against the Los Angeles Lakers.

“It takes resiliency to win a title, and resiliency is what defines this Warriors team,” NBA commissioner Adam Silver said during the ceremony.

Stephen Curry stood to the side, emphatically cheering as he watched each of his teammates receive his ring. As Curry walked toward center court to receive his, MVP chants broke out throughout Chase Center.

“Hold up,” Curry told them. “We have some other work to do before that.”

Curry also took a moment to wish Brittney Griner — a WNBA player for the Phoenix Mercury — a happy 32nd birthday. Griner has been detained in Russia since mid-February.

Following the presentation of the 16-carat, yellow diamond rings, a video played on the giant screen of team owner Joe Lacob stating that the Warriors needed more banners. The video was from 2010.

Drake’s “Big Rings” blared from the speakers as the Warriors’ seventh championship banner — and their fourth in the past eight years — was raised.

Former Warrior Juan Toscano-Anderson, who now plays for the Lakers, was the first to receive his ring. A native of Oakland, California, Toscano-Anderson said earlier in the day that he purchased courtside seats for his mother to watch the game.

Ahead of the ceremony, Golden State center James Wiseman told ESPN he was excited about the pregame ceremony but that he had some butterflies because it was both his first ceremony and his first season opener since his rookie year in 2020. After all, the team still had a game to play.

“I’m thrilled with the win,” Warriors coach Steve Kerr said after the game. “Ring night is never an easy game, and the first game of the season is usually filled with some nerves early on.

“We’re not where we need to be, but we took care of business.”

The Warriors’ win was fueled by one of their signature third-quarter onslaughts, outscoring the Lakers by 13 points that period. The Lakers were held to just six field goals and were forced into seven turnovers in the third, while the Warriors scored 32 points and saw Curry come alive.

After struggling early — scoring just four points in the first quarter — Curry scored 29 points on 9-of-15 in the final three quarters of the game. He finished the night with 33 points, the second most he has scored in a season opener (40 in 2015).

Kerr said the depth is something that reminds him of his 2014-15 roster, with a slight difference.

“[There were] stretches where of that season that [some] played very limited minutes or didn’t play at all,” Kerr said. “[This year’s bench] reminds me a lot of the talent level. That team was veteran, and this team is young guys, but the talent is really obvious.”

Curry agreed with Kerr, saying that’s where the team’s motto “Strength in Numbers” comes from. He admitted it’s not always as easy for players to adopt that mindset as they make it seem. Still, they will do what is needed to achieve their ultimate goal: defend their title and hang another banner at Chase Center.

“After tonight, the journey really begins in terms of everybody’s best shot,” Curry said. “You got some really talented teams that are going to be gunning for you. You have to be ready for it all. It’s going to be a really long journey, but this is why we play. We’re competitive. This is why we work as hard as we do. We can’t just sit there and look at that ring.”