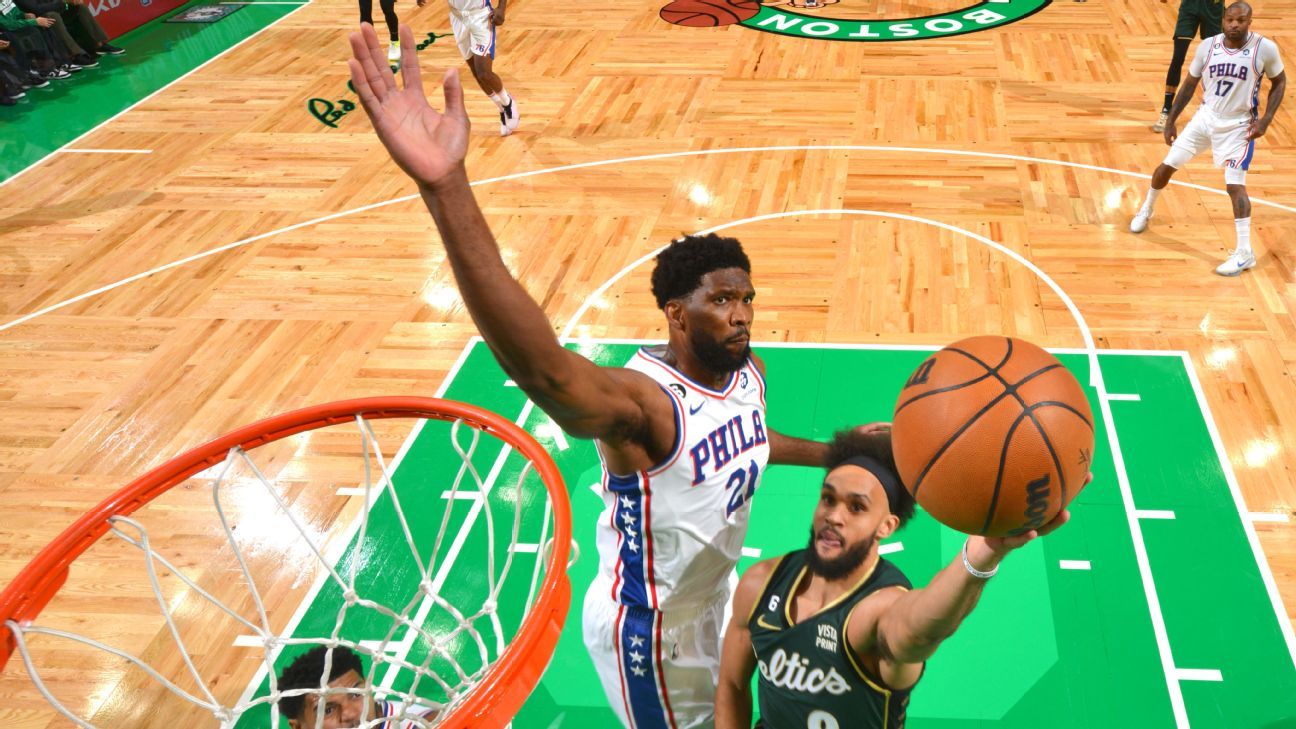 The NBA is back!

The 2022-23 season tips off with a doubleheader. First up, the Philadelphia 76ers take on the Boston Celtics in an early clash of Eastern Conference contenders. The Celtics are the defending conference champs, while the Sixers are looking to end a Finals drought that has lasted more than two decades.

Out West, the defending champion Golden State Warriors will receive their rings after winning their fourth title in the past eight seasons. Looking to spoil the celebration will be the Los Angeles Lakers and LeBron James, who begins the season needing 1,326 points to pass Kareem Abdul-Jabbar as the NBA’s career scoring leader.

We’ll have complete coverage from Boston and San Francisco with highlights, takeaways and the moments that matter all night long.

What to know about all 30 teams | Experts’ picks

Arms, legs and fouls heat up start of second half

It took only 19 seconds for the second half to get interesting.

Boston’s Marcus Smart gets tangled up with Philly’s Joel Embiid, who hooked his arm and drew a foul. Smart then tried to grab Embiid’s leg, and Embiid fell to the ground. Jaylen Brown then came over and got in Embiid’s face.

Eventually, after a long review led by crew chief and veteran official James Capers, the only penalties assessed on the play were to Smart — both a personal and technical foul.

Still, safe to say that there is no love lost between these two teams, and a potential seven-game playoff series down the road between them would be must-see TV.

Well, that was awfully fun.

The Celtics and 76ers are tied at 63 at halftime, following a rollicking opening 24 minutes that saw both teams make big runs, stars on both teams show out, and interesting subplots from a minuetae standpoint on both sides.

James Harden had 22 points, three rebounds and four assists, but his biggest highlight came in the form of a horrendous sequence that saw him both shake reigning NBA Defensive Player of the Year Marcus Smart (only to give a good long shimmy) and airball the subsequent 3-pointer. Harden then allowed Jayson Tatum to coast by him for a layup on the following possession, and Joel Embiid then committed his third foul at the other end.

Embiid went 3-for-7 from the field, but his immense presence inside caused problems for Boston. Speaking of Celtics bigs, Noah Vonleh, played the fourth most minutes on the team, behind only Jayson Tatum, Jaylen Brown and Marcus Smart. And, not surprisingly, it was Tatum and Brown leading the way for Boston, as the dynamic forward tandem for the Celtics combined for 34 points on 12-for-23 shooting.

What a wild sequence: James Harden absolutely shakes Marcus Smart, does a shimmy, then airballs a 3, followed by Jayson Tatum going right by him for a layup at the other end and Joel Embiid picking up his third foul.

In the second quarter, Malcolm Brogdon has given Celtics fans a glimpse of what he can provide this team — and what the Celtics lacked in last year’s playoffs.

Brogdon has scored six quick points and picked up a nifty assist to Noah Vonleh inside, flashing the kind of scoring punch and creation off the bench that Boston never had during its run to the 2022 NBA Finals. For all of the understandable focus on Stephen Curry‘s heroics in that series, Boston lost because its offense couldn’t get it done against Golden State’s defense. Having another proven player like Brogdon off the bench is not only something that could benefit the Celtics during what they hope is a deep playoff run next spring, but it’s a role that could make Brogdon a favorite to win this year’s NBA Sixth Man of the Year award.

Philadelphia’s James Harden has 16 points at the end of the first quarter. He has already drawn three 3-point shooting fouls, including a completed four-point play, and also became the first player in the NBA to shoot the free throw for the new take-foul rule at the 6:13 mark of the first quarter.

Harden was counted out by many after an uncharacteristically poor set of performances following his trade to the 76ers last season. I always anticipated he was injured more than washed up as he has been dealing with the remnants of his soft tissue injuries. His performance so far Tuesday falls in line with my preseason expectations that Harden is poised for a big season.

Harden’s up to 16 PTS for the @sixers on TNT pic.twitter.com/HD9K3GER4k

76ers’ backup center not a surprise

One of the interesting subplots of the 76ers‘ preseason was who would get the backup center minutes behind superstar Joel Embiid, with both veteran Montrezl Harrell and emerging youngster Paul Reed both getting shots at it.

Tuesday night, it was Harrell who got the call midway through the first quarter, as he slid into a familiar partnership from the opening years of his career, running pick-and-rolls with James Harden.

This was what was anticipated when Harrell was signed, with he and Harden expected to run pick-and-rolls against backup units. But Reed got enough playing time during the preseason over Harrell to at least make it a question of which one would play, and 76ers coach Doc Rivers said on multiple occasions both players would get their chances.

The way this game played out also answered another question: how Rivers will deploy his rotation. At least in the short-term, it looks like Harden is going to get his chances to eat offensively, while emerging star guard Tyrese Maxey will partner with Embiid.

With Robert Williams III sidelined for the next few months, it’s going to take some creative work from the Celtics to navigate life without one of the best defensive big men in the NBA.

And, in the first five minutes of the 2022-23 NBA season, we have seen the Celtics begin to do just that. First came the decision to start Derrick White, opting to go with a small lineup with Jaylen Brown and Jayson Tatum at the two forward spots as opposed to opting to play a bigger option alongside Al Horford.

Part of the reason why interim coach Joe Mazzulla, in his first game on the sidelines for the Celtics, has gone with that lineup throughout the preseason, came along when the first player off the bench for the Celtics in Tuesday night’s game against the 76ers was journeyman big man Noah Vonleh.

Vonleh, the ninth pick in the 2014 draft, is playing for his eighth team in eight NBA seasons, after spending all of last season playing for the Shanghai Sharks of the Chinese Basketball Association. While he had a strong training camp, the fact Vonleh is playing early minutes for the Celtics is both a sign of how little frontcourt depth Boston has, as well as at least a partial indictment of the chances that former All-Star big man Blake Griffin is going to make any kind of meaningful impact on Boston’s roster moving forward.

Embiid with the massive block

Jayson Tatum was ready for the 2022-23 season to begin. He scored 7 of the Celtics’ first 9 points, including this 3-pointer from the corner. Tatum’s career high for a season-opener is 30 points, on Dec. 23, 2021 against the Bucks.

Jayson Tatum is 💲 from the corner 🎯#KiaTipOff22 Live Now on TNT pic.twitter.com/pGlSiohKJg

Jaylen Brown speaks on the lasting impact and legacy of the great Bill Russell 💚 pic.twitter.com/hmh2OvZAyY

Before tip-off tonight the @celtics honored Bill Russell with a poem titled “SESTINA” written and performed by Porsha Olayiwola 💚 pic.twitter.com/xAn4DuQx0j

Blake is in the building

Blake Griffin arrives for his debut in Boston! #KiaTipOff22

But it’s not even Wednesday…

The Warriors enter the season looking to become the NBA’s first back-to-back champion since … the Warriors. Golden State pulled off the feat in 2017 and 2018, back when Kevin Durant was starring in the Bay Area. Now it’s Andrew Wiggins who is teaming with Stephen Curry, Klay Thompson and Draymond Green, and Wiggins just signed a contract extension that will keep him with the Warriors through the 2026-27. What that extension — and another four-year deal for Jordan Poole — means for Green remains to be seen. Green made headlines this preseason when he punched Poole during practice, and is still waiting on a contract extension of his own.

While the Warriors were the last team standing last season, the Lakers failed to even make the postseason for the second time in four years with LeBron James on the roster. James enters this season not only trying to return to the playoffs, but looking to break the NBA’s all-time points record. He’ll once again partner with Anthony Davis and Russell Westbrook, the latter of whom spent the entire offseason in trade rumors and came off the bench in his final preseason appearance — something he hasn’t done in a regular-season game since his rookie season.

We think of the Warriors winning four rings in the Steph Curry era, but the franchise has leaned into their total titles in new signage around the Chase Center. Golden State now has seven — one more than all those chips the Chicago Bulls collected with Michael Jordan.

JTA will get his ring, but Walker won’t be watching

Juan Toscano-Anderson says he purchased floor seats for the first time in his life so his mom could see his ring ceremony tonight. I asked him how much: “Too much.” A little more prying: “Five figures.” And figures to be a priceless moment for his family. pic.twitter.com/XtaWGDjrYN

Lonnie Walker doesn’t plan on taking in the Warriors’ ring ceremony as a spectator. He will be a little preoccupied with prepping to guard the 2022 Finals MVP pic.twitter.com/nLL6F7SSLF