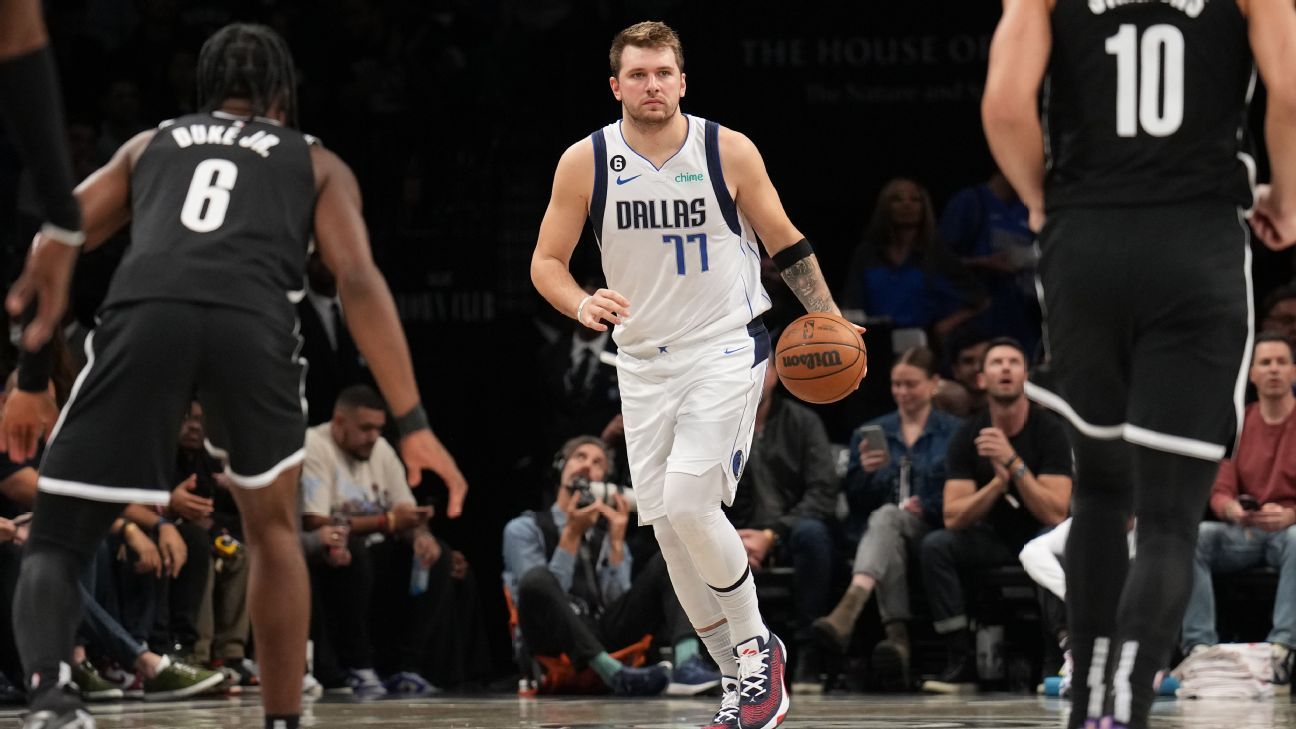 NEW YORK — As the final seconds of regulation ticked down Thursday night with the score tied between the Dallas Mavericks and Brooklyn Nets, the entire Brooklyn defense converged on Mavericks star Luka Doncic, clearly convinced he’d try to win the game himself.

But with two guys on him, and Nic Claxton flying in to try to block a potential game-winning shot, Doncic instead rifled a one-handed pass all the way to the opposite corner, where teammate Reggie Bullock was standing wide-open.

Bullock’s shot was just long, forcing overtime. But it was that same mantra of trusting in his teammates that Doncic stuck with in the extra session. The result? Three straight 3-pointers — by Tim Hardaway Jr., Maxi Kleber and Bullock — that pushed Dallas to a nine-point lead, one the Mavericks never relinquished en route to a 129-125 victory, as Doncic finished with an eye-popping 41-point, 11-rebound, 14-assist triple-double.

“Obviously, Luka is probably the best guy to make tough shots and make shots when they count, but he also knows when to make the right basketball plays,” Kleber said. “He just has a good feel for when he should shoot himself and when he has to get other people shots.

“He just makes the right basketball plays all the time.”

Even playing on the same court as fellow basketball maestros Kevin Durant (37 points, five assists) and Kyrie Irving (39 points, seven rebounds, four assists), there was little doubt who the best player on the floor at Barclays Center was on this night. Doncic was plus-20 in his 40 minutes, as the Nets were able to repeatedly make hay in his brief forays to the bench.

But, even as he watched his teammates give back the lead on multiple occasions, Doncic stuck to his belief in them, looking for them time and again. And, ultimately, it paid off.

“Yeah,” Doncic said, when asked if he always tries to make the right play.

His teammates, however, always trust him to deliver them the ball. And while it was the three triples in a row in overtime following Doncic’s pull-up jumper to open the extra session that won the game for Dallas, it was a pass late in the third quarter that was the true highlight of the night. On that play, Doncic made a truly ridiculous no-look overhead pass to Kleber under the basket for a layup.

It was a play that caused the entire building to gasp in unison — but one Kleber said he could see coming.

“It was really a ridiculous pass,” Kleber said with a laugh. “I don’t know how he saw it, but for some reason playing with Luka now for a long time, I thought he might see that pass, but I saw guys helping up on him so I was like I have to be ready, and then the pass came.

“I don’t know how he saw it, to be honest. You have to ask him yourself. But it was an incredible pass.”

When he was asked about it, Doncic simply shrugged.

“I honestly don’t know. It’s tough to explain,” he said. “I don’t really know the answer to that. I probably just say I try some things on the court. That was it.

“Sometimes in practice, I try to do some dumb things, probably … sometimes in games, it works.”

There was plenty that worked in this one — although Doncic’s turnover with 12.4 seconds left on a steal by Ben Simmons led to a dunk by Durant with 8.8 seconds to go that tied the score, and at least made for the possibility that Dallas (2-2) could suffer a third disappointing loss in four games to start the season.

Instead, the Nets went cold in overtime, going 3-for-10 from the field as Brooklyn lost for the second straight night and for the fourth time in five games to begin the season.

“He makes others better,” Nets coach Steve Nash said of Doncic. “He makes his teammates better. He makes plays for others — 14 assists, not to mention all the times he probably gets the hockey assist so he puts an incredible amount of pressure [on teams]. All they do over and over again is him in pick-and-roll, get a matchup and make a play, and that’s a lot of responsibility for him and he handles it almost every night.”

Amid everything else that was happening in overtime, a fan lobbed a cup of ice onto the court, which landed in the middle of referee Bill Kennedy, Doncic and Claxton. The fan tried to run out of the bowl of the arena but was apprehended by security and arrested, according to a Barclays Center spokesperson.

Doncic was unfazed by it, saying “nothing” went through his mind while watching it happen, while Hardaway praised the referees for getting everyone off the court and for arena security for doing their jobs.

‘Teams are looking for a different type of big’: The Cavaliers have two
NBA Power Rankings: Celtics and Suns surging into December
The Whiteboard: Inner circle NBA contenders are separating
Sources: Optimism KAT avoided substantial injury
5 NBA players who could be traded before the end of December