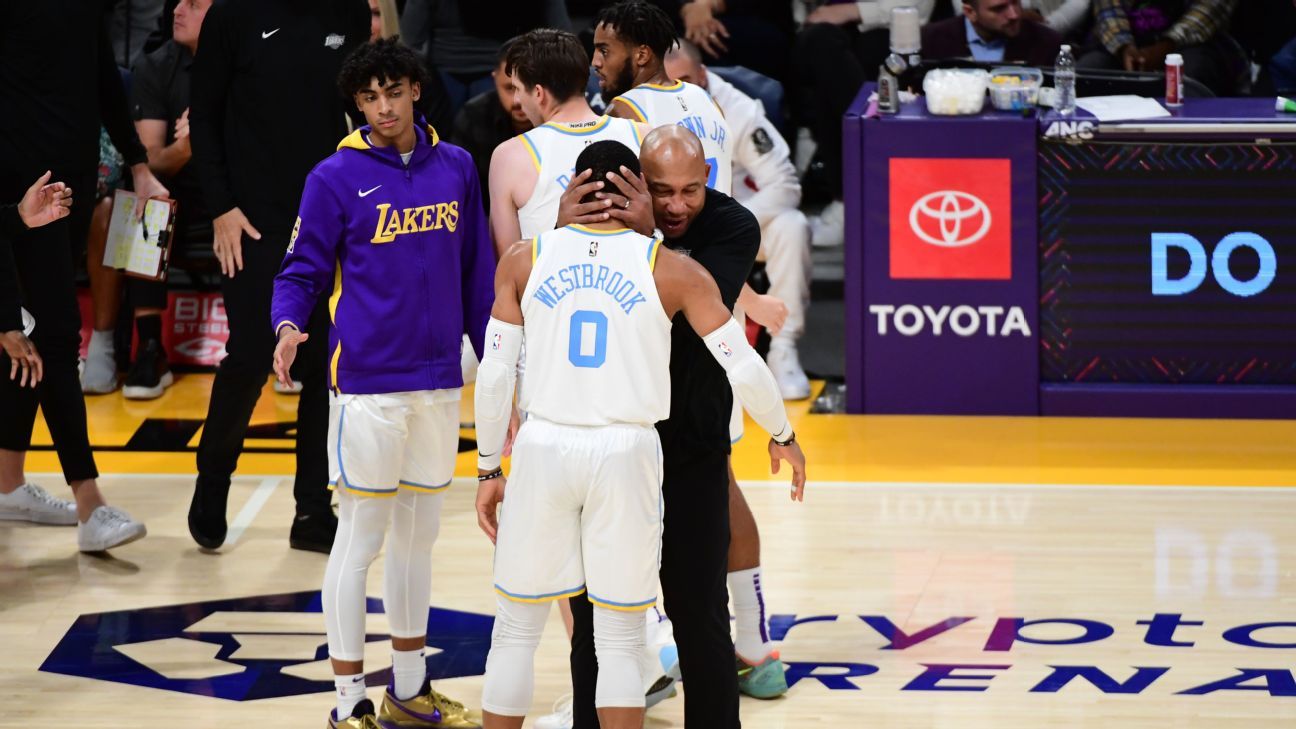 LOS ANGELES — Coming into Sunday as the NBA’s last winless team at 0-5, the Los Angeles Lakers finally broke through with a 121-110 decision over the Denver Nuggets, giving first-year coach Darvin Ham the first victory on his résumé.

“Very nice little bath,” said Lakers big man Anthony Davis, who returned from a one-game absence because of lower back tightness to put up 23 points and 15 rebounds. “There’s not more we can ask for from a coach. … We deserve it, he deserves it, and it was good to get him his first win as a head coach.

“He made a speech, and it was like, ‘All right, Coach, we don’t care what you’re saying,’ and then we drowned him with water.”

While Ham got soaked, the Lakers looked like the Splash Brothers. L.A. connected on 8-of-16 from outside in the second half and was 13-for-30 for the game (43.3%), after having the worst 3-point shooting start to a season in league history through five games.

“I just think the ball had a little pop to it. Guys were penetrating, kicking, finding open shooters, and guys didn’t hesitate,” Ham said. “I’ve been saying it since Day 1: Shots are going to fall. Our offense is going to catch up to our defense.”

“To be a player of his caliber and asked to come off the bench, that’s truly a guy doing whatever the team asks to get a win,” Davis said of Westbrook. “Sacrifice his starting position for the betterment of the team. He’s flourished in that role. That’s all we can ask for. I told him, ‘Just keep what you’re doing, man. Everything you’re doing is unbelievable.’ In the last two games, he just kind of been doing his thing. Proud of him.”

Westbrook paid it forward, giving credit to guys like Lonnie Walker (18 points) and Austin Reaves (10 points) for helping to key the Lakers’ 17-0 run that spanned from late in the third quarter to early in the fourth and put them in the driver’s seat.

“I love seeing my teammates flourish, honestly,” Westbrook said. “I get a joy by seeing others do great; my whole career, what lifts me up is to see others do well. And tonight was that night to see guys making shots, competing, and that’s all you can ask for.”

At 1-5 and 14th in the Western Conference standings, there’s still plenty of work to do before L.A. can become remotely comfortable.

Davis, for instance, said his back is still bothering him even though he was able to play 37 minutes versus Denver.

“One day feel great, and the next days I [only] feel all right,” said Davis who added he is experiencing a “good amount” of pain. “So, just try to see what happens, try to manage it and keep getting treatment.”

L.A. gets two days off before its next challenge: Zion Williamson and the visiting New Orleans Pelicans on Wednesday, the team that edged the Lakers out of the play-in tournament race last season.

The Lakers will try to bottle the same group energy they played with against Denver — and perhaps add to the collective camaraderie coming off of James’ annual Halloween costume party on Monday.

“We’re all here for one reason, and that’s to win,” James said. “When guys’ numbers are called or not called, we have to understand it’s for the better of the team, not individuals. And tonight was one of those cases where guys stay ready, and guys who stayed ready and whose number wasn’t called as much as it was before, but they were still locked in and cheering on the group, the group that was in there.

“So that’s what the team is all about.”

Protests, bizarre news conferences and yams: Inside two ridiculous weeks with Kyrie Irving and the Nets
5 moves the Los Angeles Lakers can make to turn season around
3 moves the Nets can make to turn their season around
Current NBA player couldn’t make it through 5 minutes of Steph Curry workout without puking
The Whiteboard 1-on-1 NBA Power Rankings: The best bucket-getters