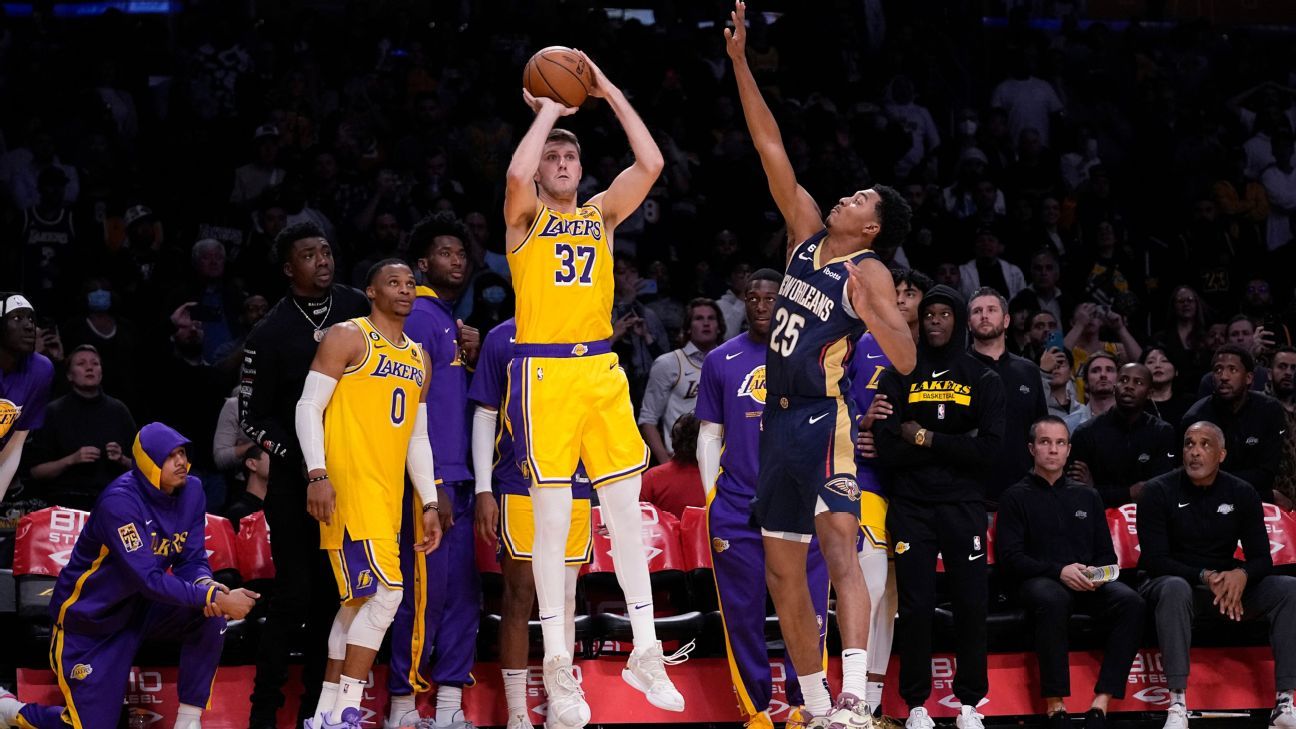 LOS ANGELES — As sick as LeBron James felt coming into Wednesday’s game against the New Orleans Pelicans — bedridden by a virus that even caused him to miss the team Halloween party — he surely would have felt sicker if the Los Angeles Lakers blew a 16-point lead and fell to 1-6.

Turns out that Matt Ryan was just what the doctor ordered.

Ryan hit a tying corner 3-pointer off a pinpoint crosscourt inbounds pass from Austin Reaves at the end of regulation, and L.A. held on in overtime 120-117 to win its second game in a row.

“Today was the first day I got out of bed since Sunday night,” said James, who finished with 20 points, 10 rebounds and eight assists. “There’s something going around, and it hit me pretty good. It hurt me to my soul to miss the Halloween party with all of my guys on Monday.”

While James missed the festivities, the Lakers have dressed up as a successful team their past couple of games after starting the season 0-5.

And the clouds have parted ever so slightly for a team that has already had more than its fair share of injuries and roster scrutiny to begin the season.

“My confidence is, when it comes to shooting, it’s unwavering,” said Ryan, who was 2-for-8 from 3 the day before hitting the big one. “I mean, I wouldn’t be here if that wasn’t the case.”

Coach Darvin Ham said he called for the play to go to Ryan, who was a DoorDash delivery driver before playing in one game for the Boston Celtics last season. He came to the Lakers as a training camp invitee and earned a partially guaranteed contract thanks to his outside shooting performance in the preseason.

“I kind of just felt in my gut that [the Pelicans] know Matt is a threat to shoot it but I would be using him as some type of decoy for someone else,” Ham said. “But the play was definitely intended for him. Austin threw a hell of a pass.”

The Lakers wouldn’t have been in that position if not for missing five straight shots in the last minute and a half of the fourth quarter that preceded Ryan’s shot. And if not for a little luck, too. Pelicans rookie Dyson Daniels missed two free throws with 1.6 seconds left that could have iced the game. Had he made even one out of two, Ryan’s shot would have been moot.

“We didn’t deserve to win that game, so credit to the Lakers, they did what they needed to do,” Pelicans coach Willie Green said.

Time will tell whether the mini win streak is a sign of bigger things to come for the Lakers or a brief respite in a season full of nightly battles in the Western Conference. To that point, L.A.’s next opponent Friday, the Utah Jazz, are 6-3 despite trading away both of their All-Stars in Donovan Mitchell and Rudy Gobert during the offseason.

There won’t be a lot of easy nights, and many results could come down to something as miniscule as a Daniels free throw or a Ryan 3.

“Just keep this feeling,” Anthony Davis (20 points, 16 rebounds, 4 blocks) said on the key to the Lakers building on their current momentum. “Just kept fighting, trying to stay in this moment of remembering how winning feels. We want to continue to do it.

“It’s starting to click, starting to find things. Find rotations, find situations where we were really good. And guys are staying ready, coming in and playing well. We’re starting to put everything together.”

10 trades and free-agent signings the Lakers would like a do-over on
Mike Budenholzer calls on NBA officials to ‘protect’ Giannis Antetokounmpo
Kawhi now out vs. Warriors along with George
‘I’m a foxhole guy’: Pat Bev tossed for Ayton shove
If nothing else, Ben Simmons gave 76ers fans free Chick-fil-A