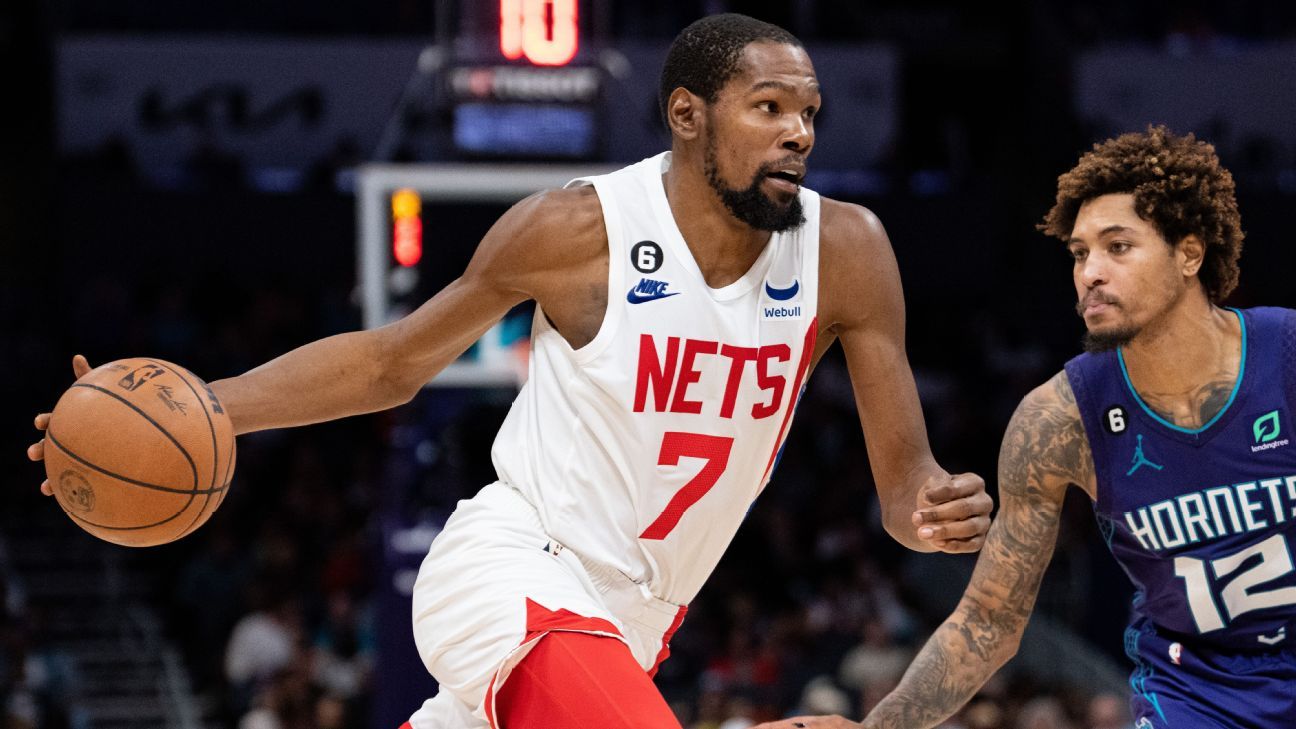 CHARLOTTE, N.C. — After one of the most tumultuous weeks in recent NBA history, an expression that seemed impossible to fathom just a few days ago appeared on the faces of Brooklyn Nets players and coaches after a come-from-behind 98-94 win over the Charlotte Hornets on Saturday night — a smile.

The joyous scene inside Spectrum Center capped a week that included Nets guard Kyrie Irving initially defending his decision to post about a movie and book that featured antisemitic themes and the Nets announcing that Steve Nash was out as head coach Tuesday. As the week progressed, the Nets suspended Irving for at least five games after he failed to formally apologize for his post during a Thursday afternoon news conference, though Irving went on to apologize late Thursday night. Amid the chaos, the Nets lost four consecutive games.

Saturday’s win was Brooklyn’s second straight. Like many within the Nets’ traveling party, star forward Kevin Durant smiled proudly at the postgame podium while noting this week was “probably going to be the toughest thing we deal with as a group.”

“It was a unique experience for sure,” Durant said after the game. “But a lot of guys been through different things in this league before, and a lot of guys have been through some adversity in this league off the court. Having to lock back in and focus solely on the game, I think that we all get a little bit of solace in doing that, just playing the game of basketball, getting that camaraderie, that fellowship with your teammates, I think that was able to get us through.”

With the Nets looking tired down the stretch Saturday, it was Durant who helped lead his team back to victory by making several key plays. Durant, who finished with 27 points, was inserted back into the game with 6:30 left in regulation and the Nets down 87-75. From there, Durant took over and helped create space for his teammates as the Nets clawed back for another much-needed victory.

“There’s going to be more peaks and valleys throughout the season, but this is probably going to be the toughest thing we deal with as a group,” Durant said. “To know that we can get through this and continue to stick together, I think that’s important.”

Durant was asked if this was the most challenging week of his career.

“I’ve had some weeks — we’ve fired coaches before, guys got injured. It was just a tough week,” Durant said. “But yeah, I’ve been through some tough weeks before. I don’t want to act like this is some anomaly. There’s a lot of s— that goes on in the NBA. It’s a chaotic league. And we’re with each other every day, it’s a six-month, seven-month season. Something is going to happen.

“So it’s really all about how you bounce back, and I’m glad we were able to bounce back, get two wins. But we got to keep pushing, keep building. That’s the thing.”

After the backlash against Irving and Nash’s exit as head coach, the feeling of relief within the Nets’ locker room was palpable late Saturday as players and coaches celebrated the win.

“I just think we rallied around each other,” Durant said. “It was a tough week for us. And it’s always good to just get back to the game. Once the ball is tipped all the bulls— goes out the window.

“So I think everybody was just waiting to get back to playing, and we also lost three or four games before that, so we just felt some pride and wanted to come out here and get some W’s. So it’s good for our character, it’s good for the energy of the team and to fight through adversity.”

The Nets head to Dallas to play the Mavericks on Monday night, looking for their third straight win in a week the group won’t soon forget.