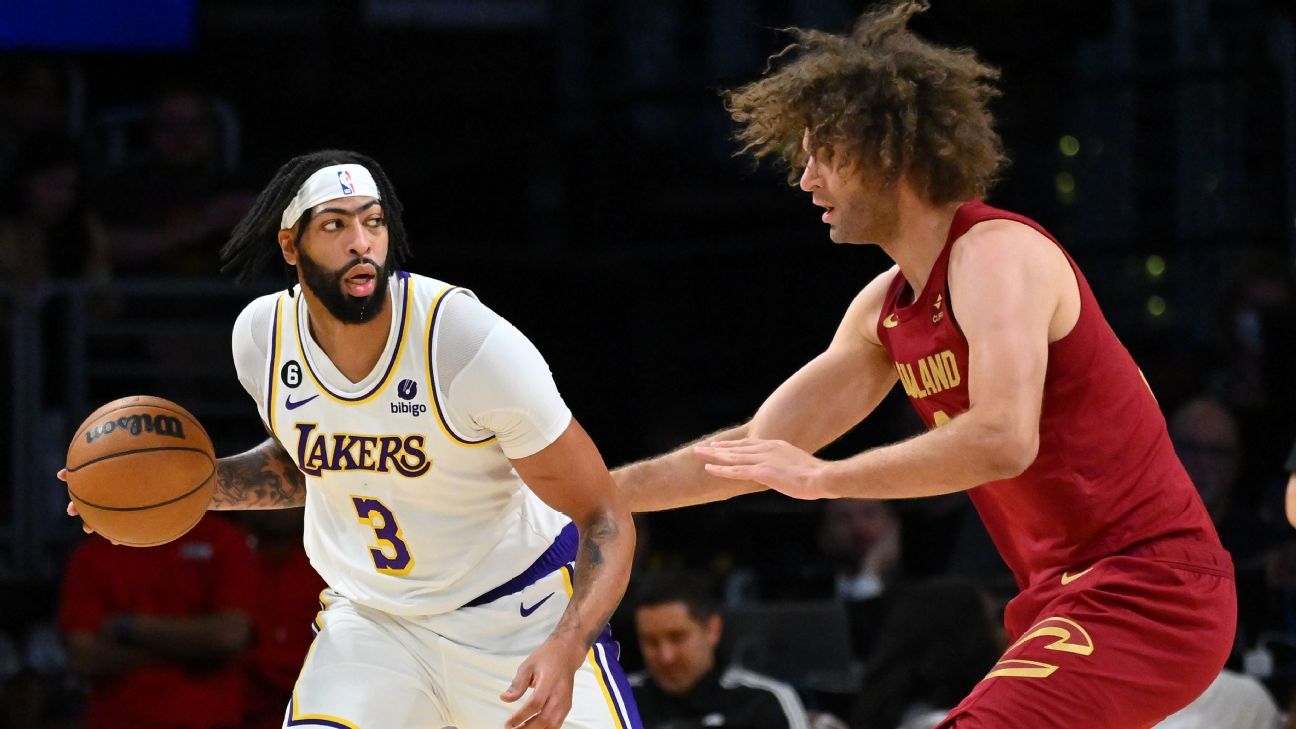 LOS ANGELES — Anthony Davis attempted just two shots in the second half of the Lakers‘ 114-100 loss to the Cleveland Cavaliers on Sunday, dropping Los Angeles to 2-7 on the season.

“Obviously, it starts with AD and getting him more touches,” LeBron James said afterward. “Our focal point is and always should be to make sure he touches the ball throughout the course of possessions, quarters, halves.”

Davis was 4-for-5 from the field in the first quarter as the Lakers outscored an opponent (36-30) in the opening frame for the first time all season. Then Davis was just 1-for-2 in the second half as the Lakers scored 36 points in the third and fourth quarters combined.

There were differing perspectives offered on whose responsibility it is to involve the talented big man more: his teammates, his coaches or Davis himself.

“I don’t know whose primary job it is, to be honest,” said Russell Westbrook, who finished with 19 points, 10 assists and seven turnovers as the Lakers’ primary ball handler with the second unit. “I’ll leave it up to the coaches to figure out the best way for them to utilize him.

“When I’m in, I do the best job I can in making reads, try to make the game easier for him when I’m in.”

Lakers coach Darvin Ham put the onus on the players: “These guys are not rookies.” Ham essentially explained that the veterans on his team have free reign to course-correct as they deem fit — Davis included.

“We have a playbook. We have a menu and a bunch of sets where AD can be featured,” Ham said. “You have to just be organized.”

It was the second straight game in which Davis’ output plummeted after halftime. In Friday’s blowout loss to the Utah Jazz, he scored two points on 1-for-4 shooting after the break, souring a night that started with him scoring 20 points on 8-for-13 shooting in the first half.

“He’s got my blessing to scream out, call his own number,” Ham said. “We tried to get him going, tried to get Bron going on some post actions and some step-ups and pick-and-roll stuff. It’s not like we’re not trying.

“And sometimes the game dictates things to go in another way. They go on a run and then we’re trying to play faster to try to possibly score more. So it’s a lot of different variables that go into that. It’s not like, ‘OK, you’re just not calling plays for AD.’ That’s not the case.”

Davis declined to speak to reporters after Sunday’s loss. Entering the game, he was bullish on the Lakers’ potential, despite their early-season woes.

“We’re not the team that our record shows,” he said after practice Saturday. “Any given night our team can play very well and explode for a big night. … I know teams fear us, for sure. We just got to continue to apply pressure.”

James had a more pragmatic view.